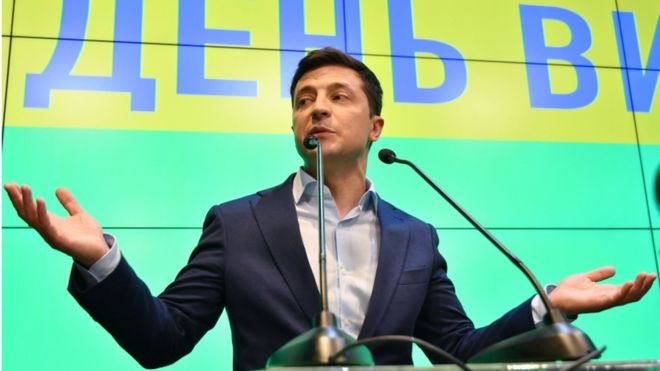 Ukraine’s president-elect has mocked Russia’s offer to give passports to his countrymen, saying the document would provide “the right to be arrested”.

He later said he was mulling extending the scheme to all Ukrainians.

But Mr Zelensky – a former comedian with no political experience who was elected last Sunday – said he did not believe many of his countrymen would take up the offer.

“Ukrainians are free people in a free country,” he said.

The Facebook post was written in both Ukrainian and Russian “so that everyone can hear us”, Mr Zelensky said.

Relations between the two countries were further strained this week when Ukraine’s parliament passed a law making the use of the Ukrainian language mandatory for public sector workers.

Russia says the move discriminates against Russian speakers in Ukraine – for many, particularly in eastern regions, Russian is still the first language.

The new tensions add to the challenges facing Mr Zelensky, who ousted Petro Poroshenko by a landslide.

What did Putin say?

On Wednesday, the Russian leader announced the passport scheme would be applied to Donetsk and Luhansk, the self-declared republics seized by Russian-backed separatists in 2014 after Russia annexed Crimea from Ukraine.

Crimea itself was incorporated into Russia, giving its inhabitants the same citizenship rights as those in Russia.

Mr Putin said people living in Donetsk and Luhansk who considered themselves Russian were entitled to Russian passports.

On Saturday, he said: “We’re considering providing a simplified procedure [of obtaining Russian citizenship] to all the residents of Ukraine.”

How did Ukraine respond?

Mr Zelensky said a Russian passport provides “the right to be arrested for a peaceful protest” and “the right not to have free and competitive elections.”

He also demanded a “complete de-occupation” of eastern Ukraine and Crimea stressing that his country “doesn’t give up”.

But Mr Zelensky also struck a conciliatory tone, saying he was ready for negotiations on the armed conflict, that has claimed about 13,000 lives since 2014.

“I hope that Russia is more inclined to speak than to shoot,” he wrote.

In the run-up to his election, he said he had wanted to “renew relations” with eastern Ukraine and start a “powerful information war to end the conflict”.

In response, Russia said it wanted him to show “sound judgement”, “honesty” and “pragmatism” so that relations could improve.

What is the new language law?

Ukrainian must be used for signs, letters and in adverts

Local TV channels are set a target of 90% Ukrainian content

Ukrainian should be used for all official duties of public servants ranging from the president to judges, doctors and bank workers

Mr Zelensky, whose own first language is Russian, defended the new legislation, which Mr Poroshenko had championed.

However, he added that he intended to review it once he took office.