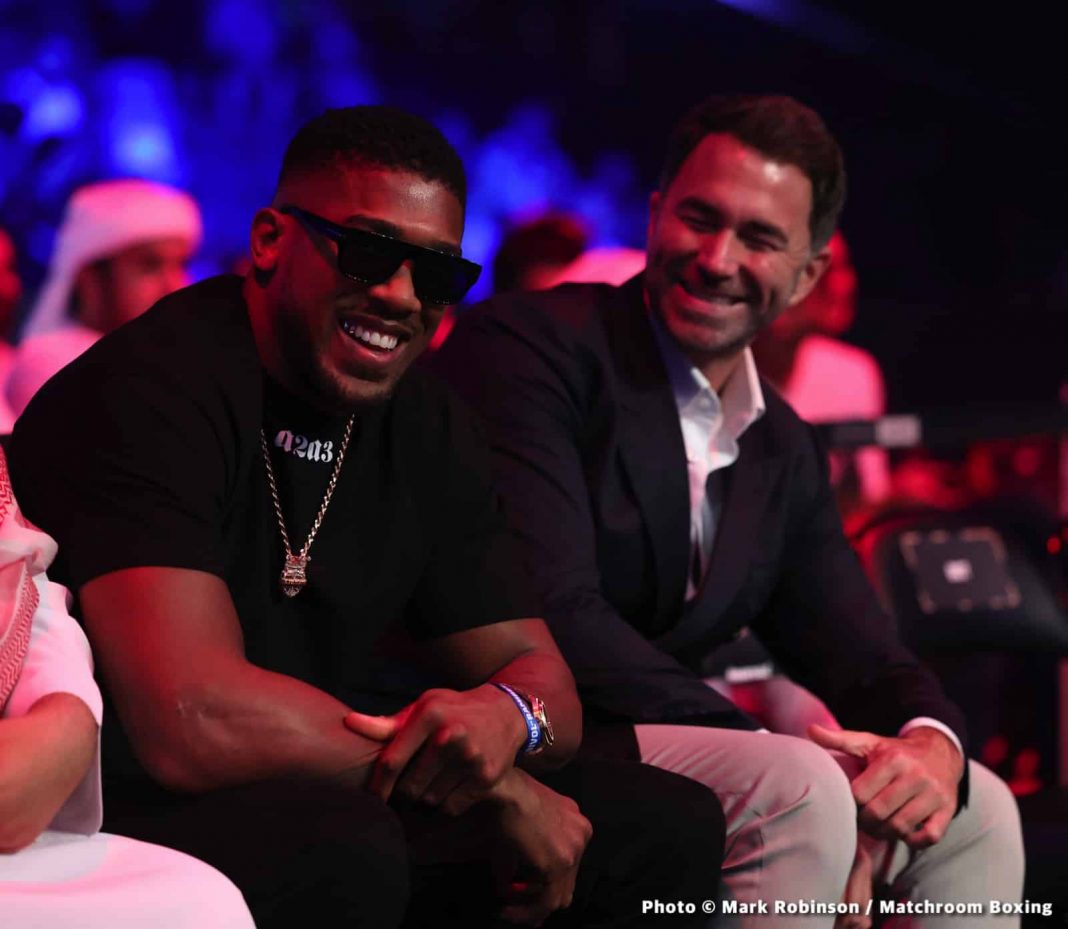 By Charles Brun: Eddie Hearn says Anthony Joshua has a superior resume to Tyson Fury’s. AJ wouldn’t stoop to the level of calling out a fighter as we saw with ‘The Gypsy King’ last Saturday in calling out Oleksandr Usyk and Joe Joyce.

Hearn feels that the only two notable names on Fury’s 14-year resume is Wladimir Klitschko and Deontay Wilder. Klitschko was 40 years old and no longer the fighter he’d once been when fought Fury.

“I think it was stopped too late, but Derek Chisora is never going to let you pull him out,” said Eddie Hearn to Pro Boxing Fans about last Saturday’s victory by Tyson Fury against the washed-up old journeyman Derek Chisora.

“Everybody at ringside, everybody watching, wanted that fight stopped, but still, it went on four or five rounds too long.

“Tyson Fury is an elite fighter, and he was too good for him. He won every second of the fight, and it was one-sided. Yeah, it was going to be what it always was. Everyone knew that” Hearn said in reaction to being told that True Geordie had predicted that Fury vs. Chisora 3 would be a mismatch.

“We knew Chisora would try to win. I don’t really feel that Tyson Fury needs to prepare for Usyk. Tyson Fury has been boxing for a long time. He knows all styles. It was a payday.

“It’s not his style,” said Hearn when asked why Anthony Joshua didn’t call out Fury after his win over Chisora. “Tyson Fury calls everybody out. His [Joshua] resume is in a different league than Tyson Fury.

“Tyson Fury has fought Wladimir Klitschko and Deontay Wilder. That’s it in terms of elite heavyweights. I know Dillian Whyte was a good fight, but I’m talking about the top, top guys consistently.

“Tyson Fury is an outstanding fighter, but AJ isn’t Tyson Fury. He’s not going to start slagging people off, getting in their face, and calling them dossers, rabbits, and happy teeth. It’s just not his thing.

“I think they [Team Fury] sold 40,000 or something like that. It’s a good effort, especially for December. Tyson Fury is a big draw, and he’s also a big draw in America. That’s why we always agreed to do a fight [between Joshua and Fury] 50-50.

“When Tyson came back and offered us 60-40, AJ accepted the terms. We never got there, so it’s irrelevant. So, yes, they’re both huge stars,” said Hearn.

“No, he’s just finalizing his training team, and when that’s in place, we’ve got three or four guys, and we’ll make a decision,” said Hearn when asked who Joshua will be fighting next.