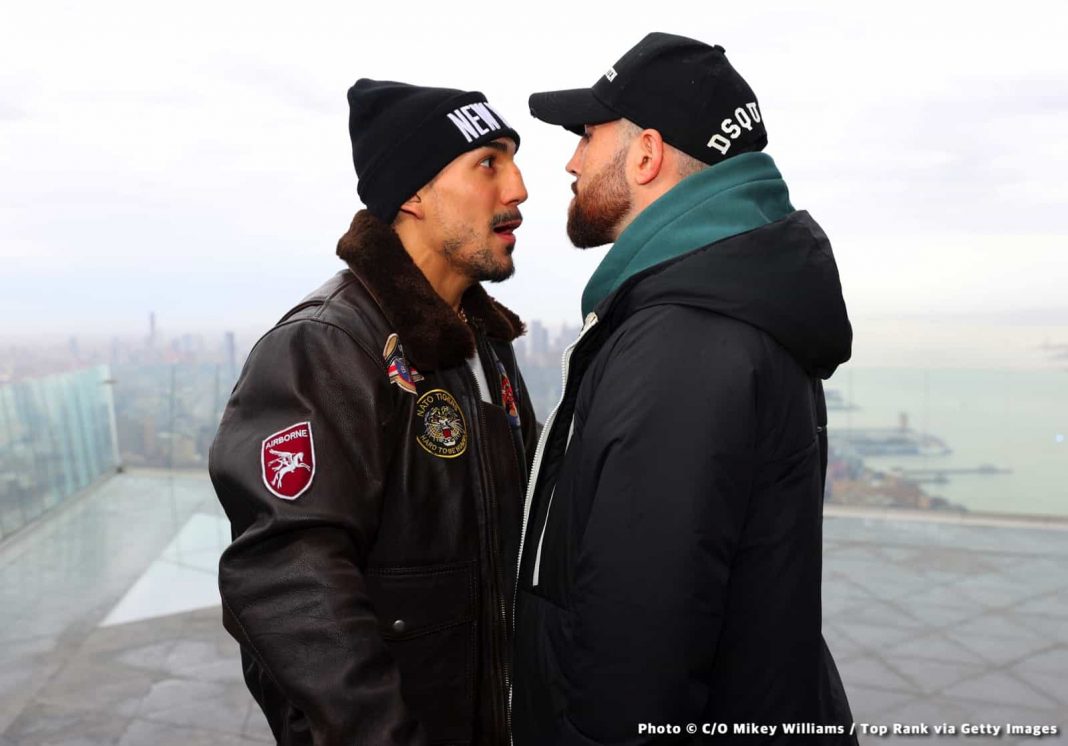 By Craig Page: Teofimo Lopez looked to get Sandor Martin to flinch during their face-off this week by screaming at him. Teofimo (17-1, 13 KOs) is no longer feared by his opponents after losing to George Kambosos Jr in 2021 and choosing not to try and avenge the loss.

The original plan was for Teofimo to fight the aging former featherweight Jose Pedraza, who, at this point in his career, is nothing like the fighter he’d been while campaigning at 126. That fight would have been piece of cake for Teofimo.

Unfortunately for him, Pedraza pulled out of the fight due to illness and was replaced by the Spaniard Sandor Martin. This is the fighter that retired Mikey Garcia last year in October.

Sandor, 29, has the skills and a tricky style to outbox Teofimo like he did with Mikey Garcia. If Teofimo loses this fight, it would be his second in his last three contests and a signal to Top Rank that they need to start considering dumping the fading boastful fighter.

The last thing Top Rank needs is another Adrien Broner type of fighter who is only good at talking but can’t compete with good opposition.

Interestingly, there’s not a lot of buzz about Teofimo’s fights compared to his contests before his loss to Kambosos.

The reason for that, you can argue, is that a lot of boxing fans jumped ship after Teofimo lost to Kambosos and blamed his defeat on being injured. In hindsight, it would have been better if Teofimo had admitted that Kambosos had outsmarted him.

Teofimo hightailed it out of the 135-lb division after his defeat to Kambosos, and he’s since had one fight at 140 against an obscure lower-level fighter named Pedro Campa last August.

Like in his loss to Kambosos, Teofimo was beaten to the punch and hit often by Campa. However, Campa’s lack of power kept Teofimo in the fight long enough to score a knockout in the seventh.

“We wanted Josh Taylor right away, but he’s fighting Jack Catterall. So, let’s fight that Mikey Garcia guy, and we were in negotiations with him,” said Teofimo Lopez Sr. to My Mixtapez.