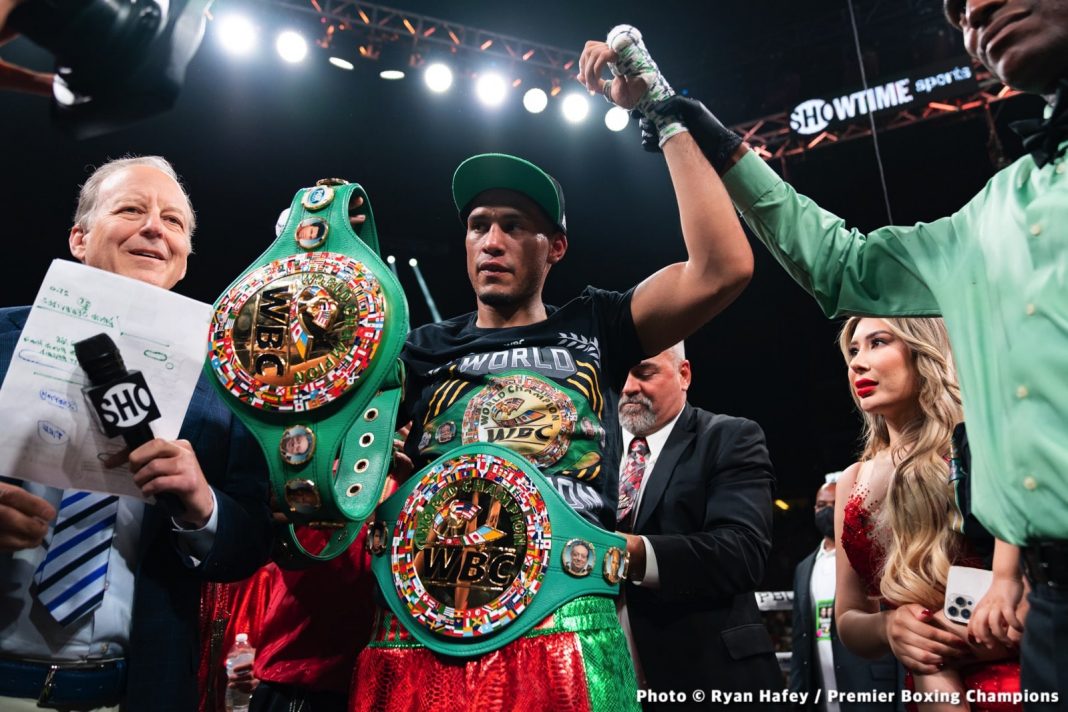 By Dan Ambrose:  Caleb ‘Sweethands’ Plant and David Benavidez will meet in early March in a WBC super middleweight final title eliminator on Showtime to decide a mandatory for Canelo Alvarez.

Technically, it’s a fight to decide the mandatory for undisputed champion Canelo, but as Jose Benavidez, Sr. points out, it only works one way.

If Plant (22-1, 13 KOs) wins, he’ll get the Canelo fight, but if Benavidez comes out victorious, the WBC title will be vacated by Alvarez.

Benavidez Sr says Canelo won’t fight David regardless, so the only thing David will get out of his fight with Plant is a chance to add his name to his resume under the win column.

When Canelo vacates or is stripped of his WBC 168-lb title, Benavidez will be elevated to the full champion. He’s already the interim 168-lb champion, but for some reason, the WBC has chosen not to order Canelo to fight him.

“We got to go to the body and put him out. That’s why he asked for a bigger ring because he knows he needs that room in order to run around,” said Jose Benavidez Sr to Fight Hub TV about the early March fight between David Benavidez and Caleb ‘Sweethands’ Plant.

“We’re working on closing the angles and getting to him and not being too stand up. It’s going to be an interesting fight. We’ll see on the day of the fight who is the better fighter.

“He’s [Benavidez] been maintaining. He’s been training before that. We were supposed to fight [Jose] Uzcategui, but I think the commission or the WBC didn’t let him because of the steroid problems. No, we’ve been active.

“No, he wasn’t caught with any steroids, but they didn’t want to give him the chance because he was going to fight for the interim title. They said why would they reward him if he was caught with steroids.

“People thought it wasn’t fair. To be honest, I really don’t know what happened.

“This is very personal because Caleb Plant talked a lot of s**t. The one fighter that David [Benavidez] really wants to get in the ring with is Caleb Plant. Now it’s going to happen, and David is super excited and super motivated. I think David is going to stop him. David is going to knock Caleb out.

“We know because Caleb Plant asked for a bigger ring to move around. It’s going to be a little bit difficult to hit somebody that’s moving around. Or job is to be patient, cut the distance little by little, get in there. I see it a little more difficult if he starts running around.

“Maybe break him down, get him a little tired, get him to the sixth or seventh round, and after that, we’re going to start working. Little by little, I see a knockout in the eighth or ninth round.

“If he comes to fight, it could end up a little bit early; maybe in five or six rounds. For us, for four or five years there’s been a lot of talk, a lot of trash,” said Benavidez Sr about why they don’t like Plant.

“This is personal. David really wants to beat him up. Even for me, because at one time, we were friends. We used to train in the same gym, but then he started talking a lot of s**t.

“Even me, I told him, ‘It’s okay if you say that you’re going to knock out David or beat him up, but I don’t like these other things that you’re talking about David.’ He said, ‘You know what? You’re right. I’m going to stop that.’ The next day, he started doing the same s**t.

“So yeah, it’s personal, and I can’t wait. I’m super excited. We’re going to give him a beating. That’s what it is. Thanks to him, David is really motivated. He wants to train hard and make this fight happen.

“When I talked to him [Plant], I said, ‘We train in the same gym. I don’t want to fight or do any of that. He said he would stop, and he didn’t. Then he started talking a lot of s**t more.

“I don’t want to repeat all he said. The next day, we were walking out, and he was on the corner kind of smiling. So we were like, ‘We’re not going to go out like punks here. We’re going to try and solve this problem now.’

“I already talked to him in a good way, and he’s not understanding. We’re going to settle this problem now. That’s why we got into a little bit of a fight with everyone on his team and my team. Since then, it’s been more and more personal.

“I’ll tell you right now; I don’t think the fight between David Benavidez and Canelo will ever happen. He doesn’t want to fight David, and I understand that he feels David can end up his career.

“So, David is younger. Canelo, not to take nothing away from him. To me, he’s the best pound-for-pound 168 fighter. He’s worked really hard. He’s super disciplined.

“Now he’s getting injured, and now he’s enjoying his life a little bit more. I think it’s the beginning of the end of his career. I mean, fighting someone younger. He can still fight the guys on their way out. He’s going to win or kind of look good.

“We have a good plan. After this fight [with Plant], we have David Morrell and maybe [Jermall] Charlo. There are so many other fighters. The only thing is, we have to stay focused and continue to work hard. A lot of fighters come up every day. There are a lot of fighters at 168.

“That’s another fight that would be super interesting for us,” said Benavidez Sr about fighting the winner of the Artur Beterbiev vs. Dmitry Bivol fight. “Bivol, to me, he should be the king because he beat the king [Canelo]. So it doesn’t matter what weight. He beat him.

“I would love to fight Bivol because he beat Zurdo Ramirez and Canelo. Imagine if David can beat Bivol. He’d be the one. I would definitely love to make that fight with Bivol, also.  Bivol is a great fighter.

“We’ve seen what he’s done with Zurdo Ramirez and Canelo. He’s a very dangerous fighter. It would be an honor for us to fight him, and I’m going to tell you, I see David beating him because he’s my fighter. I believe in him, and I know he can do it. If he takes the fight with David, he’s going to believe he’s going to win.

“We have to look impressive. It’s not an easy fight, but we’re willing to take that fight. No excuses to make it happen.

“We’ve been ready to go. He’s been super motivated, and he just wants to get in there and beat Caleb Plant.