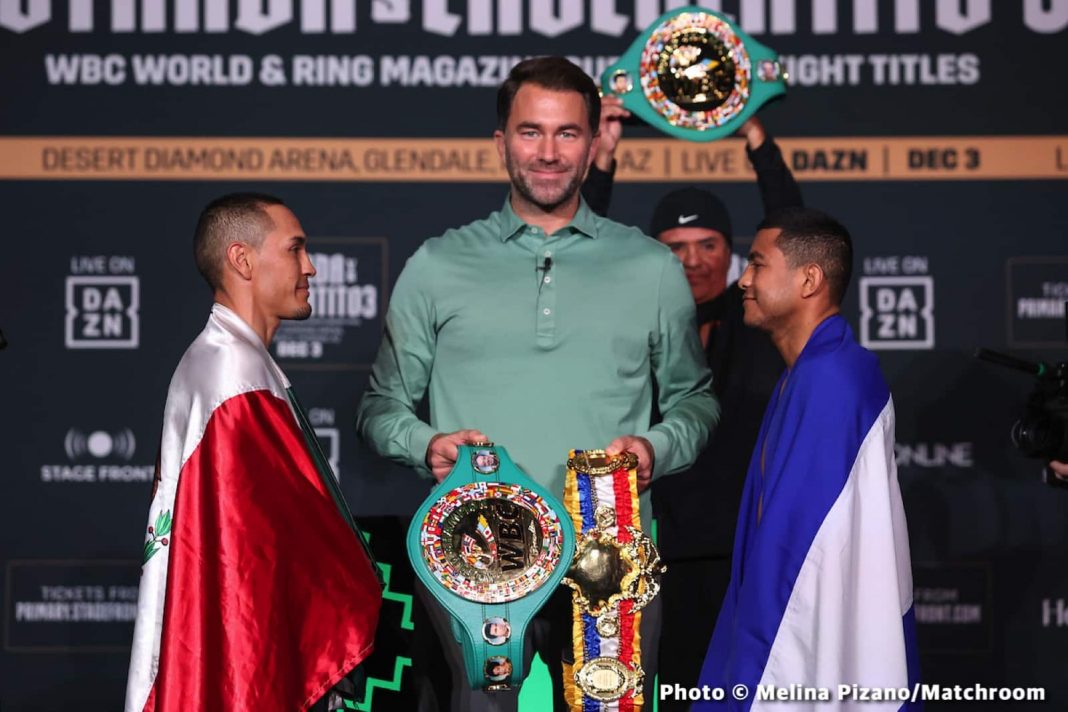 In the first two rounds, it was all Estrada with little offense from Gonzalez. In the third round, Gonzalez finally opened up, taking the first two minutes then Estrada started countering him well in the final minute.

In the fourth, Gonzalez dominated, rocking Estrada in the final seconds with a right on the chin. In the fifth, through the eighth rounds, Estrada countered very well with uppercuts to the chin having Gonzalez chasing and getting hit. In the ninth round, it went back and forth, with Gonzalez edging it out.

In the tenth and eleventh rounds Estrada out-landed Gonzalez, who kept chasing him around the ring. In the twelfth and final round, Estrada did enough to take the round and the fight. The referee was Chris Flores.

In the first two rounds, Martinez was landing combinations against the solid jab of Carmona, who also landed one overhand right in the second. In the third round, Martinez rocked Carmona in the final seconds with a combination to the chin.

In the fourth round, Carmona continued to move around the ring well, but Martinez would catch up to him with a two-fisted attack. In the sixth through the eighth rounds, Martinez continued having a problem cutting off the ring but still lands more than Carmona, who rarely uses his right.

In the ninth, the fans were showing their disapproval of Carmona running around the ring, landing a few punches. In the tenth round and eleventh rounds, Martinez had an edge when Carmona stood in front of him, but that was rare.

In the twelfth and final round, it was close, but Carmona seemed to take it. The referee was Wes Melton.

In the second round, Velazquez’s left eye area was starting to swell. In the third round, Velazquez came back well in an action fight taking the round. In the fourth and fifth rounds, Rosales used a good left hook to the chin of Velazquez, having two good rounds.

In the seventh and eighth rounds, both had their moments of a crowd-pleasing fight. In the ninth round, Velazquez used good uppercuts to the chin, while Rosales came back with combinations to the chin. In the tenth and final rounds, the fans were on their feet due to the action of both fighters. The referee was Dennis O’Connell.

In the second round halfway’s point, Pacheco dropped Luna with a right on the chin for an 8-count from Referee Tony Zaino. Pacheco went after Luna hurting him with an uppercut, two body shots, and a right to the chin, and down he went along with a cut between his eyes. Upon rising, his corner threw in the towel.

In the first two rounds, the former amateur champ Castro dominated Lopez. In the third round’s final thirty seconds, Castro landed three solid rights to the chin of Lopez. In the fourth and fifth rounds, Castro continued on the offense keeping Lopez on the receiving end.

In the sixth round, Lopez came forward fighting back, but Castro always answered him with more punches landed than Lopez. In the seventh round’s final minute, Castro continued beating down Lopez until he finally went down to a knee, spitting out his mouthpiece.

Referee Joey Chivas gave him the 8-count as the bell sounded.
In the eighth and final round, what was holding up Lopez besides his guts? No one knows. Especially Castro, who has done everything he could to stop him right up to the bell.

Scores were 80-71 by all three judges and this writer.

In the second round, Williams dominated Madsen, who was on the defense getting overwhelmed by Williams. In the third round, when Madsen got in a good right to the chin, Williams came right back with a combination.

In the fourth round, Williams drew blood from the nose of Madsen. He was warned for showboating by the referee. In the sixth through the eighth rounds, Williams continued out-landing Madsen, who landed an occasional body shot with his nose continuing to bleed.

In the ninth round, the referee Wes Melton took a point from Madsen for a forearm to the face of Williams. In the tenth and final round, Williams tried for the stoppage, but Madsen was able to go the distance in a lopsided fight.

In the first round, it was all action, with Ferreira on the attack. In the final twenty seconds, she drove Brown into the ropes, causing an 8-count from Referee Joey Chavez. The bell came to her rescue.

In the first round, it was all action midway. Herrera landed over a half dozen punches as Sullivan was walking right into them. He was coming back after a 4-year absence.

In the second round, Sullivan landed a solid right on the chin, getting Herrera’s attention and being the aggressor for the most part.

In the third round, a left hook from Herrera on the chin dropped Sullivan for an 8-count from Referee Tony Zaino in the first half minute.

Later in the final minute of the round, Herrera had Sullivan against the ropes when the referee had seen enough, calling a halt.