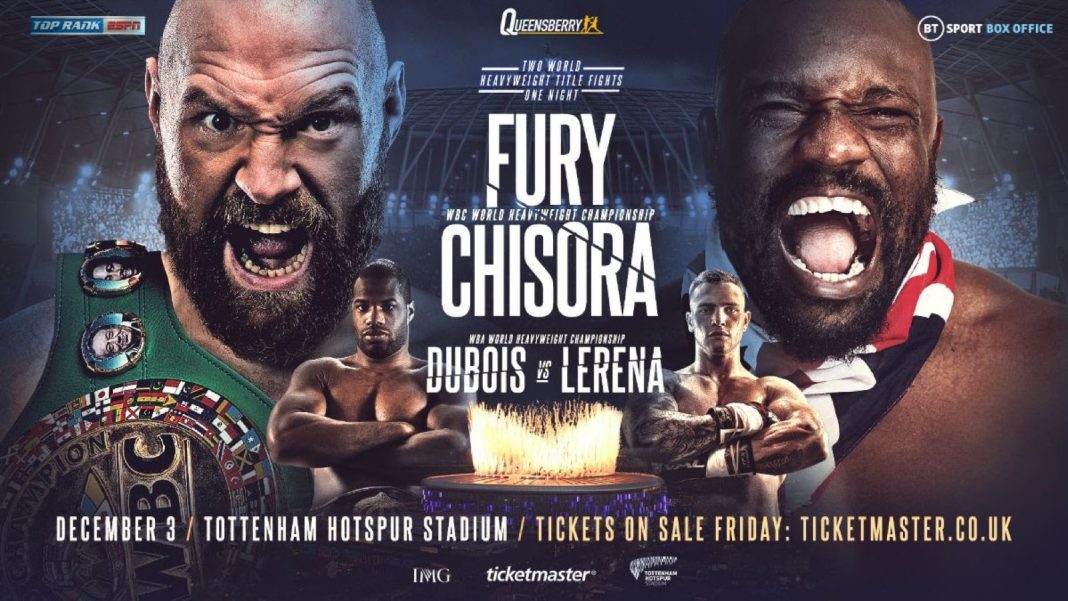 On Saturday 3rd December, boxing fans from the UK and Ireland will be able to tune in to the WBC heavyweight world title matchup between Tyson ‘The Gypsy King’ Fury and Derek ‘War’ Chisora, exclusively live on BT Sport Box Office.

The third iteration of Fury vs Chisora sees Tyson Fury enter the ring, at Tottenham Hotspur Stadium in London, looking to defend his WBC title. The fight is Fury’s second this year having defeated Dillian Whyte at Wembley Stadium with a stunning uppercut in April.

Fury’s opponent, Chisora, is coming into the bout off the back of a split-decision win over the highly respected Kubrat Pulev. December’s fight against Fury will be the Harare born Londoner’s second world title shot of his career.

Since the pair last faced off, Fury has enjoyed a glittering period of success, winning his first world titles from Wladimir Klitschko in 2015 before taking time away from the ring. Following his hiatus, Fury returned with a legendary trilogy against Deontay Wilder in which he won and defended his current WBC title.

During that period Chisora has won 13 fights, defeating established fighters such as Kubrat Pulev, David Price and Carlos Takam. In addition to this headline clash, the undercard will include a bout between Daniel Dubois and Kevin Lerna for the WBA (regular) heavyweight title.