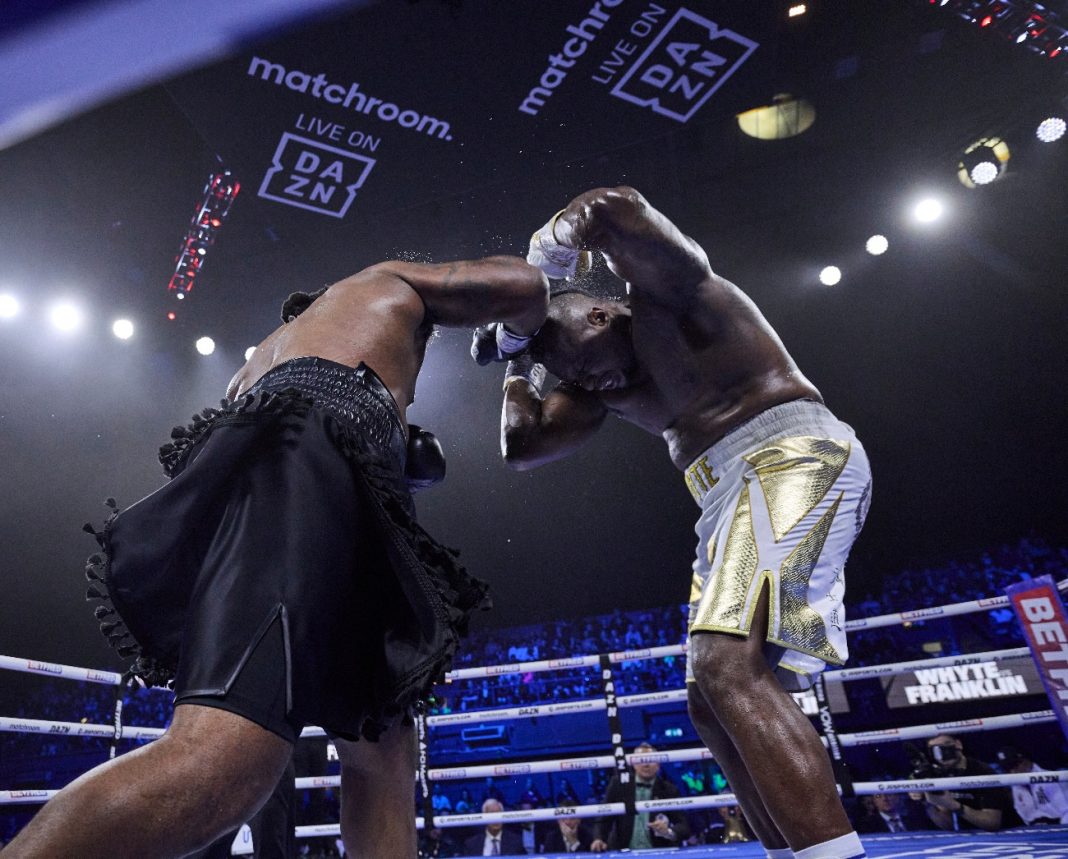 By Craig Page: Jermaine Franklin says Dillian Whyte knows that he won their fight last Saturday night in London, and he wants a rematch with him. Franklin (21-1, 14 KOs) feels that he was given a raw deal by the judges, who he didn’t know ahead of time were all from Europe.

The outcome was controversial, with the judges giving it to the British fighter Whyte by a 12-round majority decision, which ultimately ruins Franklin’s chances of setting himself up for life with a mega-payday against Anthony Joshua in 2023.

Whyte is already wealthy, with a net worth of $7 million, according to Celebrity Net Worth. But with the rematch with Joshua now assured, Whyte is about to get a lot richer next year.

Sometimes life is unfair, and you got to imagine that 29-year-old Franklin is feeling pretty down right now because he’s probably not going to get an opportunity like this again.

At best, one of the second-tier British heavyweights like Fabio Wardley might use Franklin as an opponent a few years from now after he starts slipping, but it won’t be for the big money that he would have made fighting Joshua.

Franklin wants a rematch with Whyte, but even if he were given one, it won’t be until down the road after Dillian is likely about to retire.

It won’t matter if Whyte loses to Franklin because he’ll be at the end of the road and will have run out of opportunities for paydays due to too many losses. Whyte looks shot right now, and he’s likely to be easy prey for Joshua to crush in their rematch.

That’s why Whyte is needed so badly for AJ because his own career is in such poor shape, with him having lost three out of his last five fights.

“I see I won the fight. I feel honestly that I won the fight 8 to 4, 7 to 5. Either way it goes, I feel like I won,” said Jermaine Franklin to iFL TV about his fight against Dillian Whyte last Saturday night.

“I probably sat back a little too much, waiting for him to be more aggressive than he was,” said Franklin. “We just work; we work hard every day. That’s what we do; we grind. We grind for any situation and anything that takes place that you have to be ready for.

“We’ll take any fight as long as it makes sense. We’re not ducking nothing. We’re not running from nobody. Any name that makes sense to me that comes on the call or on the table, we’ll take it.

“No, I wasn’t worried at all,” said Franklin when asked if he was worried about coming to the UK and being robbed. “I didn’t know all the judges were European, though. “I felt like that was a little bit unfair, but this is boxing. It’s been a dirty game.

“No,” said Franklin when asked if he spoke to Anthony Joshua after the fight. “Give me the rematch like I said in the interview. He knows the real. Any man that’s a man at heart and can be honest with themselves.

“He knows I won that fight, and he knows I deserve a rematch,” said Franklin about Whyte.