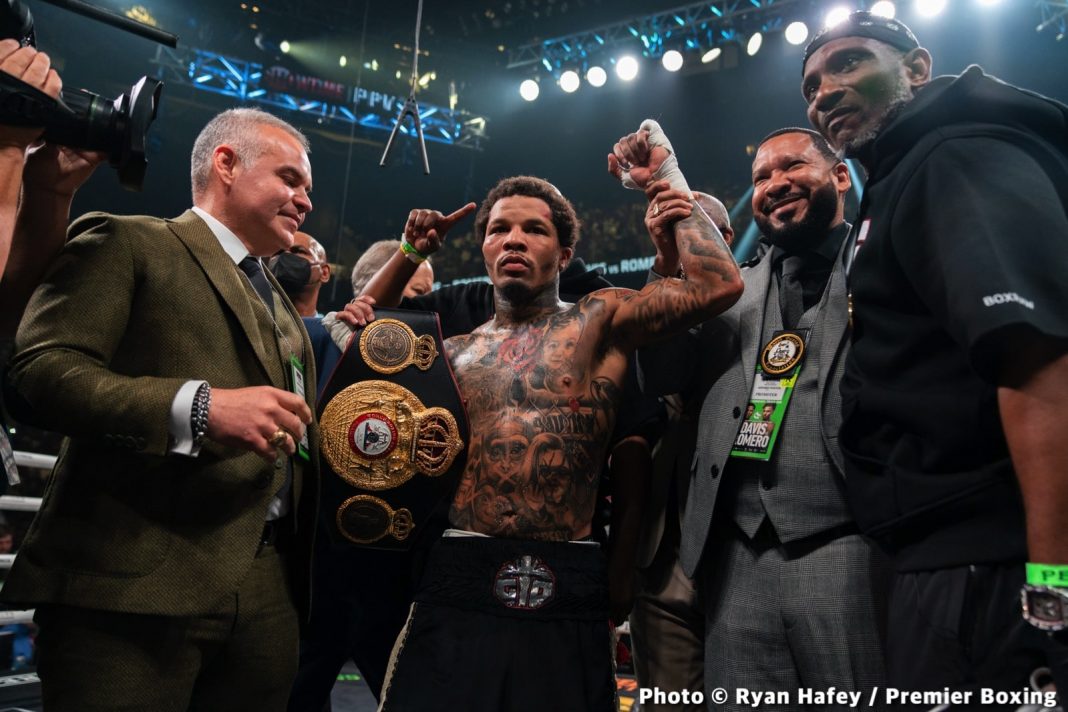 Haney and Tank Davis sparred in the past, and it’s unclear who got the better of who. Although Gervonta denies that Haney got the best of him during the sparring, there’s talk that he did.

Of course, sparring and fighting are two different things, so it’s quite possible that Tank might have the upper hand against Haney in the power department.

Haney (29-0, 15 KOs) and his dad/trainer Bill have wanted to fight Gervonta (27-0, 25 KOs) for a long, long time. Now it looks like they’ll finally get a chance, provided that Devin wins his two fights pegged for 2023 against Vasyl Lomachenko and Shakur Stevenson.

Those are two tough outs for Haney, making it questionable whether he’ll still be holding his four belts at 135 by the end of next year.

It’s too bad Gervonta can’t fight Haney after his fight with Lomachenko because that would be a great lead-up to a match against Shakur (19-0, 9 KOs).

Not taking anything away from Ryan Garcia, but he’s more of a social media boxer than a proven elite-level guy like Stevenson. The Tank-Ryan fight should come after a Haney-Tank fight.

Haney will have to run the gauntlet next year for him to come out the other end with his unbeaten record and undisputed title still intact for a fight with Tank Davis.

“If you want to fight, set it up after the Ryan Garcia fight. And tell Devin Haney’s dad to get off my d**k. Be prepared. Make sure they keep running because, after these first two, I’m coming straight at [you,” said Gervonta to The Rize Podcast about him wanting to face Devin Haney after he takes care of Hector Luis Garcia and Ryan Garcia in 2023.

“It ain’t now 50-50 fight. How you going to keep me off if you don’t have no power? How about that?” said Gervonta about Haney lacking the power to keep him off him.

To be sure, it will be difficult for Haney to keep Gervonta off him for 12 rounds if he doesn’t run the whole time.

“He did not get the best of me,” said Tank Davis when told by Blueblood that Haney dominated him during a sparring session.