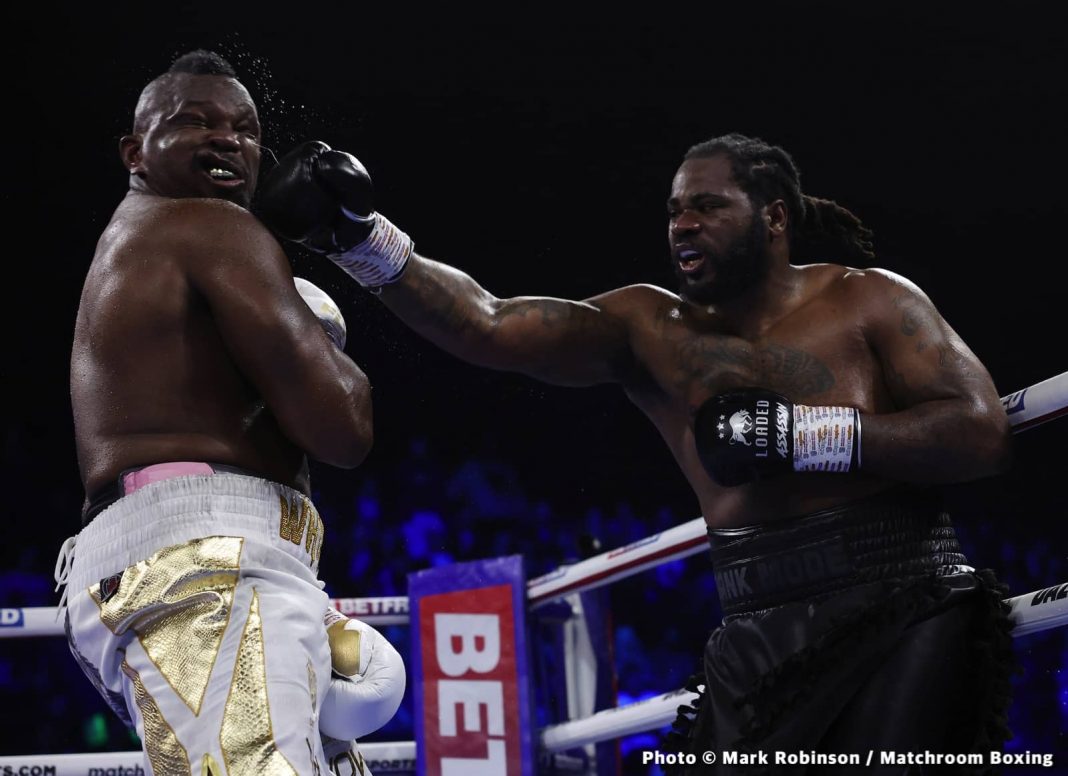 By Jack Tiernan: Dillian ‘The Body Snatcher’ Whyte is excited about the potential to make a lot of money in his rematch with Anthony Joshua next year.

Last Saturday night, Whyte (29-3, 19 KOs) got the last hurdle out of his way, separating himself from his payday against Joshua by defeating Jermain Franklin (21-1, 14 KOs) by a 12 round majority decision at the OVO Arena in London, England.

Despite many fans on social media viewing the contest as a win for Franklin, Whyte’s promoter Eddie Hearn is comfortable with the outcome of Dillian being given the victory.

Hearn plans on steaming straight ahead into a Joshua-Whyte rematch in early 2023, as long as Joshua is on board with the idea.

With the way Hearn was talking last night, it appears that he feels confident that he will persuade Joshua to take the rematch with Whyte rather than go in a different direction.

For Joshua, it might be better for him to face another opponent and give it time for the boxing public to forget about the controversy over Whyte’s questionable decision over Franklin.

If Joshua fights someone else next, the fans will have forgotten about Whyte’s ‘robbery’ decision win over Franklin, and they won’t mind as much that AJ is fighting him.

Of course, with Joshua losing his last two fights, it’s difficult to know who would be a safe choice to fight in the top 15 because he might lose to almost anyone at this stage. The same applies to Whyte.

If Dillian is incapable of beating a fringe contender like #12 WBO Franklin without being given a gift by the judges, it’s not safe for Hearn to have him take another tune-up fight against a bottom feeder.

What fans saw for themselves last Saturday night is that Whyte is a journeyman fighter and is not able to beat a fringe contender without questionable scoring.

Some of Whyte’s enablers blame his poor performance on his new coach Buddy McGirt. They think that if Whyte had slugged the entire fight, he would have found greater success and possibly stopped Franklin.

But if you remember from watching the early rounds, Whyte was getting countered repeatedly by the younger, faster Franklin each time he’d opened up with his power shots.

Whyte lacked the hand speed to get away with using his power game early on against Franklin, and he would have been at greater risk of beinng knocked out if he’d come out guns blazing from the get-go. Dillian was too slow of hand and weak in the chin department to fight like that in the early stages against Franklin.

If Whyte had fought someone like Andy Ruiz Jr, he would have been knocked out if he’d opened up with his power shots at any point in the fight because he lacks the hand speed and, more importantly, the punch resistance to fight in that way at this stage of his career.

“I want to make that fight,” said Eddie Hearn to iFL TV about his desire to make Anthony Joshua vs. Dillian Whyte next. “I’m going to speak to Dillian and the team, and he’ll have a rest now.”

“Of course, it’s a big stadium fight. It sells out Wembley,” said Hearn, talking about the Joshua-Whyte II rematch. “Wembley is a sellout in a minute, but it’s really just with AJ. If he goes in March, then obviously Dillian won’t, but in the summer, why not?”

“I want to fight early next year in February or March. I don’t want to wait,” said Whyte.

“Do you know how expensive they are?” said Hearn when it was suggested to him to have Joshua and Whyte fight on the same card in early 2023.

“Do you know how much money you have?” said Whyte. “They call you the billion-dollar kid.

“We don’t know yet,  but we’ll speak to Dillian and the team. There are lots of options,” said Hearn about who Joshua will be facing next. “I promise you that AJ will be in a real fight next.

“I don’t think there is any value in taking a lower-level fight. You can get beat at any level in the heavyweight division. He [Joshua] wants a real fight. He was watching that fight tonight, thinking, ‘I want to be involved in great fights,’ and that was a great fight,” said Hearn about Whyte’s clash against Franklin.