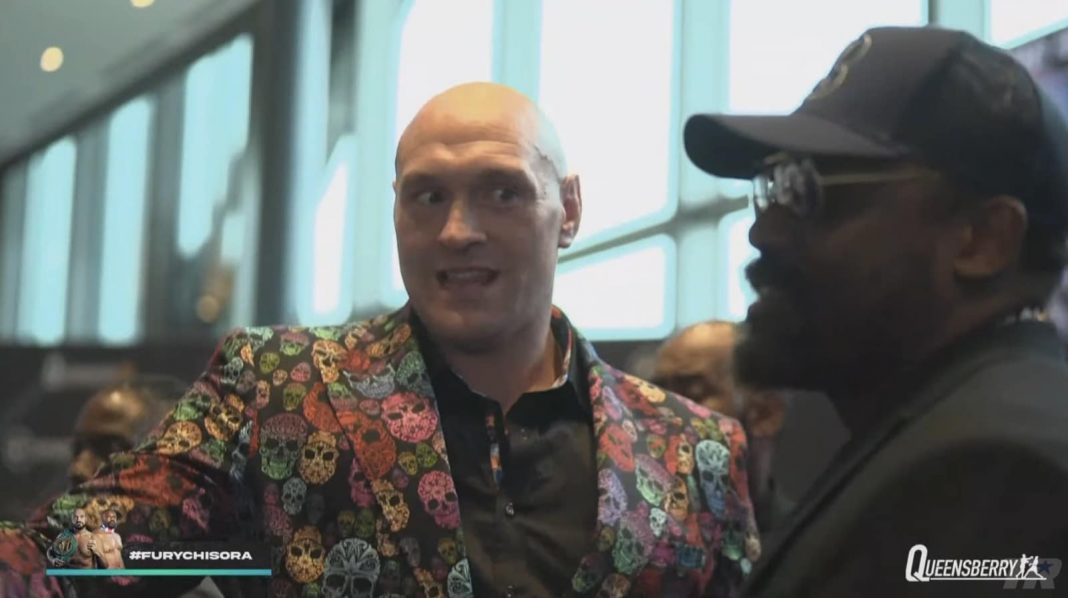 By Jim Calfa: Anthony Joshua says it’s not going to be an easy night at the office for Tyson Fury this Saturday night when he defends his WBC heavyweight title against Derek Chisora in their long-awaited trilogy match on BT Box Office PPV and ESPN+ at the Tottenham Hotspurs Stadium in London.

Joshua would like to see Fury win because a fight between the two would be huge. If Chisora wins, it would be a disaster for Joshua because they would have a rematch, which would delay his chances for a world title.

That was Chisora in the zenith of his career, and he’s a million light years away from the form that he had then.

In contrast to the fighter he was back then, Chisora fights in slow motion now and gasses out early. The only reason Chisora won his last fight is that his opponent, 41-year-old Kubrat Pulev was even more past his prime than he was.

If not for that, Chisora would have lost his fourth consecutive fight, which is terrible for a fighter challenging for a world title in this era.

Maybe a long time ago, it was common for fighters with dreadfully poor records to challenge for a world title, but not anymore.

Joshua is still pretty bummed out about losing to Oleksander Usyk for the second time last August. He probably should have listened to the fans and boxing experts about him staying away from Usyk. Joshua would have stood a better chance of beating Fury.

“Well, we have someone in Derek Chisora who has done well for himself, competed at all levels at a few eras now, and stayed around. He’s hung with the best of them, slung with the rest of them,” said Anthony Joshua to iD Boxing, discussing Derek Chisora challenging WBC heavyweight champion Tyson Fury on Saturday night.

“People might think Tyson Fury is the #1 heavyweight, and it might be easy for him, but he has to take it very seriously because this is history. He’s defending one of the most prestigious belts in heavyweight history, and I wish them both well.

“Good luck with his next fight if he comes through. Then I think he’s going to go onto undisputed [against Oleksandr Usyk], and then I’ll be fighting somebody else. Then hopefully, we both come victorious, and then we look to fight each other.

“You saw after my last fight what it meant to me,” said Joshua about him mentally imploding after his loss to Usyk last August. “Whether you like it or not, that’s pure passion. If you don’t like it, don’t tune in. That’s what I’m about. I fight. I love it.

“So yeah, I’ll be in support of Fury for that fight,” said Joshua.