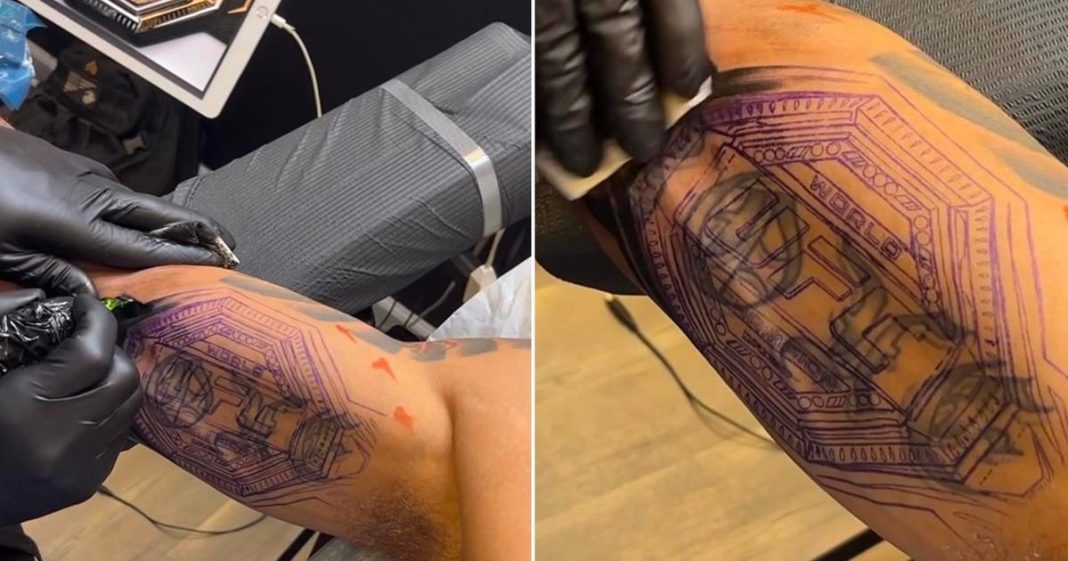 Alex Pereira has got a new tattoo of his UFC world title just days after winning the belt against Israel Adesanya.

Pereira, 35, won the middleweight belt by stopping old kickboxing rival Adesanya, 33, in the final round of their clash at UFC 281 in New York this past weekend. The Brazilian needed a finish after falling behind on the scorecards and with the help of an inspiring speech from his corner team, he stopped Adesanya with just three minutes left of the fight.

‘Poatan’ has decided to get a permanent reminder of the historic moment and posted a video of him getting a UFC world title belt inked onto his right bicep. It goes hand in hand with the tattoo Pereira has on his left bicep, a Glory world title belt to remind him of his days as a two-weight world champion for the kickboxing promotion.

Fans have weighed in on Pereira’s new ink as one user commented: “Man had a three year plan to go into the UFC and beat Israel for the belt…man’s getting tatted for sure!” A second user wrote: “Both arms gave you those belts, win the rematch!” Another user suggested Pereira should get a tattoo on his hand, commenting: “He should tattoo his left hand with the phrase ‘If you touch it, it’s either knockout or coffin’ haha.”

Pereira only joined the UFC last year and won his debut in the same venue where he knocked out Adesanya. The 35-year-old secured himself a title shot by knocking out Sean Strickland on the undercard of Adesanya’s last title defence in July, but many fans felt he was being fast-tracked into a title shot because of his history with Adesanya.

Do you want to see Israel Adesanya and Alex Pereira fight again? Let is know your thoughts in the comments section below.

Reflecting on his world title win, Pereira said: “A lot of emotions went through my head, so many years of hard work and dedication, now here I am as the champion of the world. I tried to pace myself but going into the last round my corner kept it real with me and told me I needed to knock him out. Adesanya was taking some pretty heavy hits and the referee is there to keep him safe, so I think the stoppage was correct.”

Adesanya has revealed the UFC has told him he will get an immediate rematch against Pereira despite having lost three times to the Brazilian throughout his combat sports career. ‘The Last Stylebender’ plans to take some time away from the Octagon after the defeat but will fight again before the summer of next year.