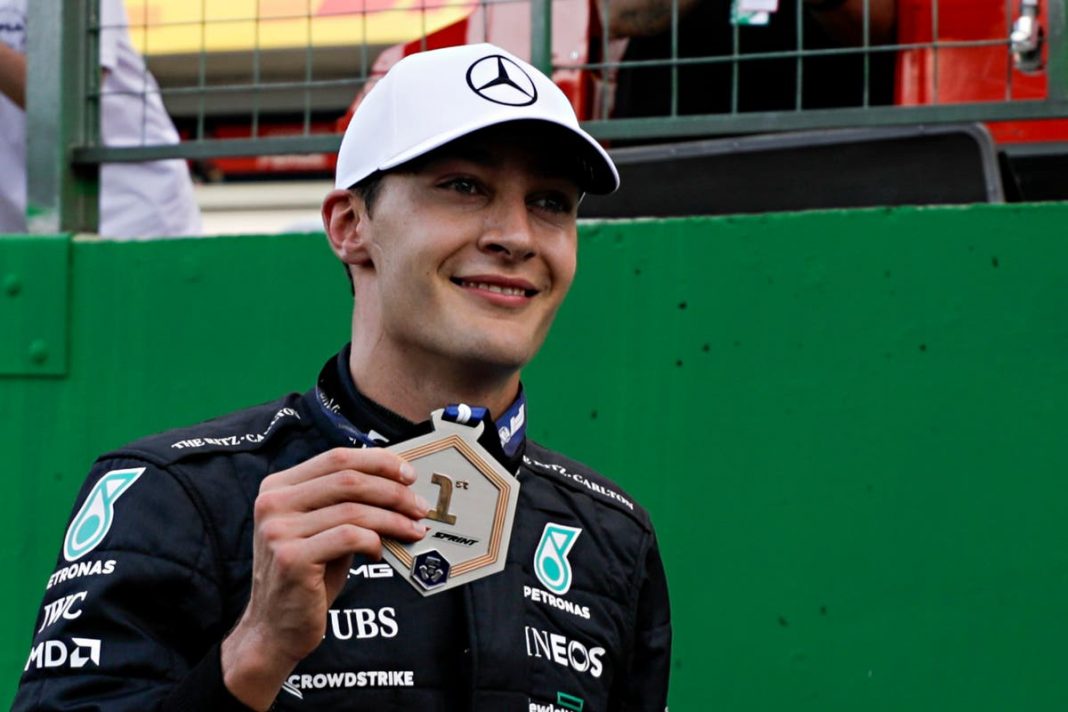 eorge Russell provided Mercedes with their best moment of the season as he won the sprint race at the Brazilian Grand Prix, the first victory of his Formula One career.

The 24-year-old was locked in a thrilling battle with Max Verstappen for a number of laps, before eventually finding a way to take the lead from the the Red Bull driver and seal pole position for Sunday’s race.

He finished ahead of Carlos Sainz, while Lewis Hamilton also passed Verstappen. Sainz’s grid penalty for an engine change means Hamilton will join Russell in an all-Mercedes front-row for the penultimate Grand Prix of the season.

Pole-sitter Kevin Magnussen took the chequered flag in eighth. He sprung the shock of the season when he claimed the first pole of his career in Friday night’s rain-affected qualifying.

But the 30-year-old Dane’s dreams of following up his maiden pole with his first win were over on the start of lap three when Verstappen cruised past him on the run down to Turn 1.

Verstappen was one of only two drivers to start the race on the slower, but more durable medium tyres. However, the peculiar move totally backfired on the double world champion with Russell, on the soft rubber, the speedier man.

By lap 12, Russell was crawling all over the back of Verstappen’s Red Bull and the Mercedes driver looked to have got the job done on the run down to Turn 4, only for Verstappen to hold firm.

The following lap, Russell tried his luck again but Verstappen defended for his life to cling on to the lead.

But his defence ended two laps later when Russell got the better exit out of the sweeping left-hander third bend to accelerate ahead of Verstappen for the lead.

Verstappen was suddenly a man in trouble and soon it was Sainz’s turn to gazump the Red Bull driver on lap 19 with Hamilton following through at the start of the ensuing lap.

“It is incredible,” said Russell. “I didn’t expect to have that much pace but it goes to show the progress we have made as a team.

“It is difficult to know how Max would have got on with the soft tyre, but nevertheless, standing here it is a great feeling.

“This is the sprint race and you have to manage that risk-reward. I wanted the victory but I didn’t want no points and to start at the back tomorrow, but it was third-time lucky.

“It is great to have both cars on the front row. Lewis did a great job coming from eighth. We are in a luxury position where we can split the strategy tomorrow and go for the win.”

Hamilton, who became an honorary citizen of Brazil following a ceremony in Brasilia on Monday, added: “I am so happy to be here.

“It has been an incredible week. It was a difficult day yesterday but then making my way through from eighth on the grid.

“Congratulations to George. We have worked so hard this year and to be on the front row, it is incredible.

“We can work as a team and hopefully hold off the guys behind. Winning for Brazil tomorrow would be incredible.”