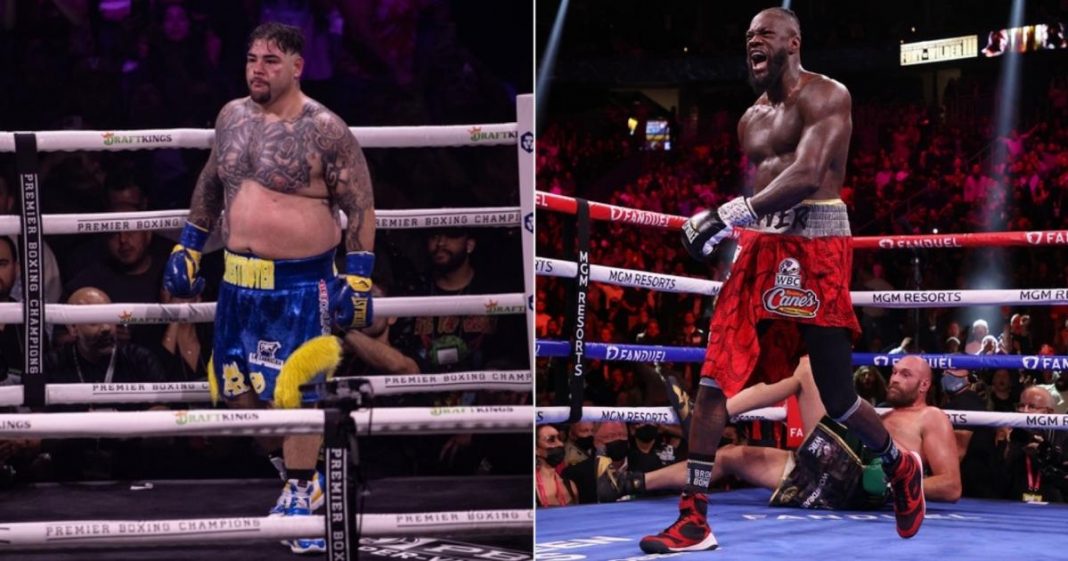 Two former heavyweight champions, Deontay Wilder and Andy Ruiz Jr., are ready to reclaim gold. The World Boxing Council recently ordered a fight between the two. If agreed upon, it may make for an interesting heavyweight title scene.

At the WBC convention in Acapulco, Mexico, President Mauricio Sulaiman approved a bout between Wilder and Ruiz. The winner would become the next mandatory challenger for WBC heavyweight champion Tyson Fury.

While the fight is not yet official, Wilder and Ruiz compete under the Premier Boxing Champions banner. Both fighters will need to accept the bout.

MORE: Deontay Wilder talks his statue, what he fights for and mental health

What is an eliminator fight?

In boxing, eliminator fights are often considered contender bouts between mandatory challengers. Various sanctioning bodies order eliminators between contenders to determine who becomes the next challenger for a title.

The major sanctioning bodies are the following:

If a fighter wins an eliminator fight, they are guaranteed a mandatory shot at whoever is the champion. If a champion relinquishes the title and another competitor isn’t already an interim champion, two top contenders can face off to determine who holds gold.

There are times when champions fight champions. Eliminators and mandatory fights often make it difficult for a unification fight to happen. That depends on if the sanctioning body pushes the bout. Any champion could be forced to vacate a belt if a bout is turned down.

Wilder made his pro debut in 2008. He won the WBC heavyweight title in 2015 against Bermane Stiverne. “The Bronze Bomber” defended the title ten times, with a draw against Tyson Fury between those defenses.

Between Wilder and Ruiz, the former has a history with Fury. Wilder knocked Fury down in the twelfth round of their first fight in 2018, but Fury miraculously got up and finished the bout. Wilder lost to Fury in a rematch in February 2020 via TKO after being knocked down several times. His corner would throw in the towel to protect Wilder, and Fury became WBC heavyweight champion.

In the trilogy fight in 2021, Fury knocked him out in the eleventh round to retain the WBC title. Following a year away, Wilder returned in October 2022. He beat WBA contender Robert Helenius in the first round via knockout.

“Deontay Wilder’s back. He’s always looking for greatness,” Wilder stated when asked about a Ruiz bout, via Boxing Scene. “That’s what he loves to give the fans. If that’s what’s lined up nextI gotta handle business, but after that, we can get it on.”

Ruiz made his pro debut in 2009 and failed to win the WBO heavyweight title in 2016 against Joseph Parker. He received another opportunity at gold against Anthony Joshua in 2019 after Jarrell Miller failed multiple drug tests, forcing him out of the bout with Joshua. “Destroyer” beat Joshua in what was called one of the biggest upsets in boxing history for the WBA, IBF, WBO, and IBO heavyweight titles.

In a rematch that year, Joshua beat Ruiz to regain the belts.

Ruiz returned to action in May 2021, beating Chris Arreola with the help of trainer Eddy Reynoso. Moving on from Reynoso after one fight, Ruiz faced and beat Luis Ortiz, a former opponent of Wilder’s, in September 2022.

Ruiz is ready for a fight with Wilder.

“… me and him (Wilder) are in the same organization,” Ruiz told Fox Sports’ Heidi Androl, via Boxing Scene. “I want to thank Al Haymon. He can make this fight happen. Let’s do it.”

When is Tyson Fury’s next fight?

Tyson Fury beat Dillian Whyte in April 2022 via TKO to retain the WBC heavyweight title. He then retired, which was short-lived.

MORE: Do we really need Fury vs. Chisora 3?

After calling out Anthony Joshua and Usyk for a fight, with demands for a December 3 fight date, Fury moved on from the two. He will now defend the WBC title against Derek Chisora at Tottenham Hotspur Stadium in England.

Fury is 2-0 against Chisora, beating him in 2011 via unanimous decision and by retirement in 2014. If Fury can get past Chisora, fans are hoping he will face Usyk for all the gold at heavyweight.