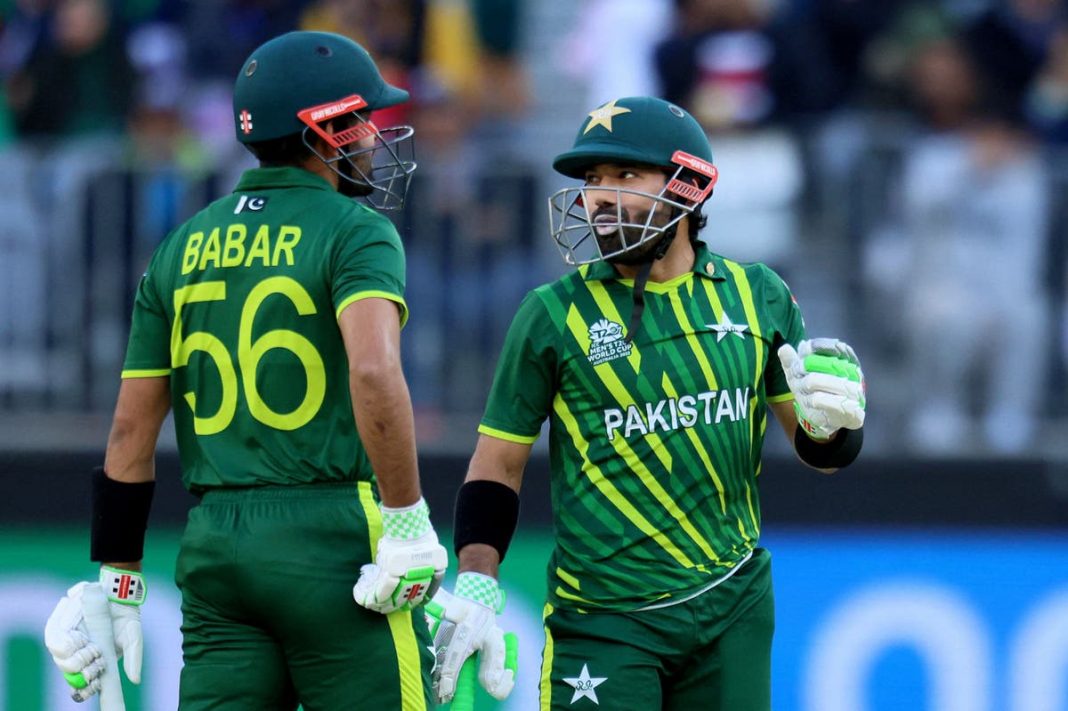 iven all the fretting in the build-up to the tournament about Pakistan’s over-reliance on Babar Azam and Mohammad Rizwan, it is a fair feat that they have reached the semi-finals of this T20 World Cup without either really firing.

Babar and Rizwan arrived in Australia by some distance the world’s most consistent opening pair, having scored almost 3,700 T20i runs between them since the start of last year, and with the only concerns not over whether they would deliver, but, given some pedestrian starts, at what cost.

Instead, Babar in particular has struggled badly, scoring just 39 runs in 63 balls across the Super 12 stage – the tone set by his first-ball duck in the opening defeat by India.

“In any given career, you have significant moments of ups and downs, and the challenges and the humps along the way, they cement you and your greatness, how you achieve under adversity,” said Australian great Matthew Hayden, who is working as a mentor with Pakistan at this tournament. “There’s no question that Babar has been under some adversity.”

Hayden, though, is backing the skipper to come good: “We all know about the weather, once there’s a lull, there’s often a storm that follows. So look out, rest of the world, because I think you’re about to see something very special from Babar.”

Rizwan’s numbers look a little healthier, helped by 49 in chasing a low target against the Dutch, but the 30-year-old made no impact against Group 2’s best attacks in South Africa and India and has surrendered his place at the top of the ICC batting rankings to Suryakumar Yadav since the tournament began.

After choking in that thriller against India and then being upset by Zimbabwe, it is a near-miracle Pakistan are still swinging. Crucial innings from the likes of Shadab Khan and Iftikhar Ahmed have taken up the slack, but it seems unlikely Babar’s men can creep any further without at least one of their big two turning up in tomorrow’s opening semi-final against New Zealand in Sydney.

They will be offered no place to hide by the Kiwis’ timeless new-ball pair of Trent Boult and Tim Southee. New Zealand’s all-format Broad and Anderson (relative spring chickens at 33) have been outstanding at the top of the innings throughout this tournament, if occasionally expensive later on, delivering unplayable powerplay spells against Australia and Sri Lanka that set up the emphatic victories that made qualification for this stage a near formality.

Boult and Southee are among the core of Black Caps who have shared in the agony of three final defeats in four white-ball tournaments (they did win the inaugural World Test Championship last year) and with Boult having stepped back from his central contract, there is no certainty of another chance to make amends further down the line.

“I guess the future is unknown,” Southee said, during the Super 12. “I guess all good things come to an end at some stage. Hopefully it’s not the end and not the last world event that we’re a part of together.

“But we do certainly cherish every game we get to play together, and hopefully there’s still a few more, obviously in this tournament and going beyond.”