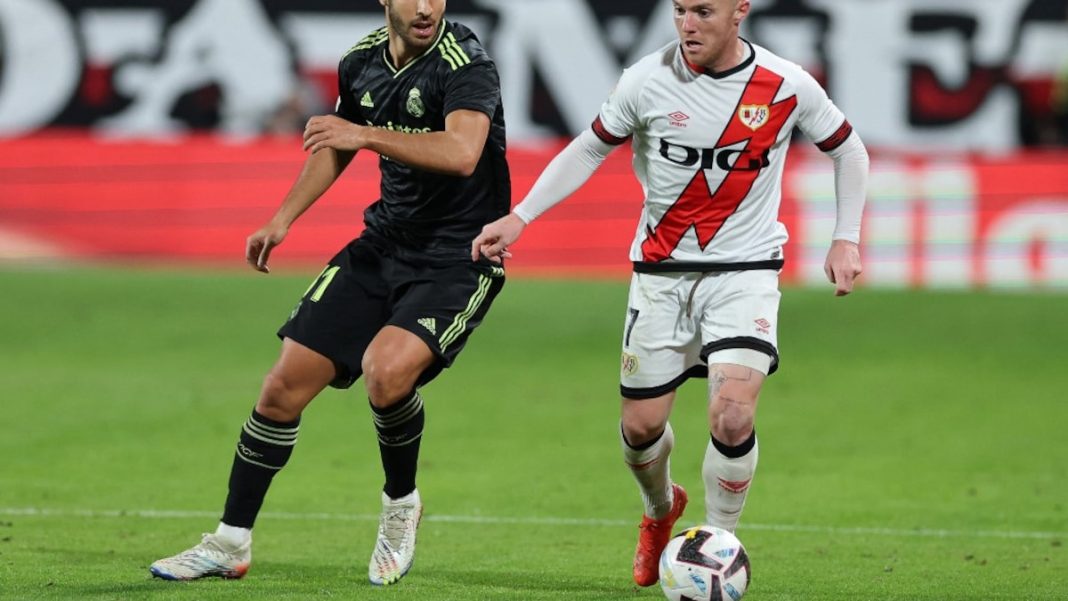 Real Madrid lost their first La Liga game of the season, going down 2-3 in a battle at city-rivals Rayo Vallecano on Monday to leave Barcelona two points clear at the top. Rayo took an early lead in a see-saw game before Real rallied to 2-1 ahead. Rayo equalised before half-time before sealing a famous win with a twice-taken penalty from Oscar Trejo in the 67th minute. After 13 matches, Barcelona are top on 34 points to Real Madrid’s 32. Playing without injured Ballon d’Or winner Karim Benzema, Real Madrid faced a tough opponent in a sold-out stadium in the working class suburb of Vallecas.

Santiago Comesana put the home side ahead to raucous scenes after just five minutes before two goals in the space of four minutes turned the match Madrid’s way.

First Luca Modric levelled from the penalty spot in the 37th minute before Eder Militao fired Carlo Ancelotti’s previously unbeaten side into the lead.

It was not to last, however, as Rayo were level at the break with Alvaro Garcia getting the better of a goalmouth scramble and snapping a shot through a sea of legs.

In a bad tempered and hotly-disputed game Real’s Belgian goalkeeper Thibaut Courtois saved a penalty from Trejo on 67 minutes but was adjudged to have moved early.

“We lost it in the individual duels, and we missed chances we would normally convert,” Ancelotti said.

Named in Brazil’s World Cup squad Rodrygo looked horrified when he fired over the bar from close range in the 90th minute.

Real’s other Brazilian striker Vinicius also fell flat but the Italian coach said the players hadn’t been distracted by the upcoming World Cup in Qatar.

“That’s the way it goes sometimes.”

“I’m upset by this defeat, not with the players, we have done better than ever in this first part of the season,” said Ancelotti.

Barcelona beat Almeria 2-0 with goals from Ousmane Dembele and Frenkie de Jong to move top of La Liga on Saturday on an emotional night as Gerard Pique retired.

Earlier Monday, Real were draw against Liverpool in the Champions League for a double header in February and March.