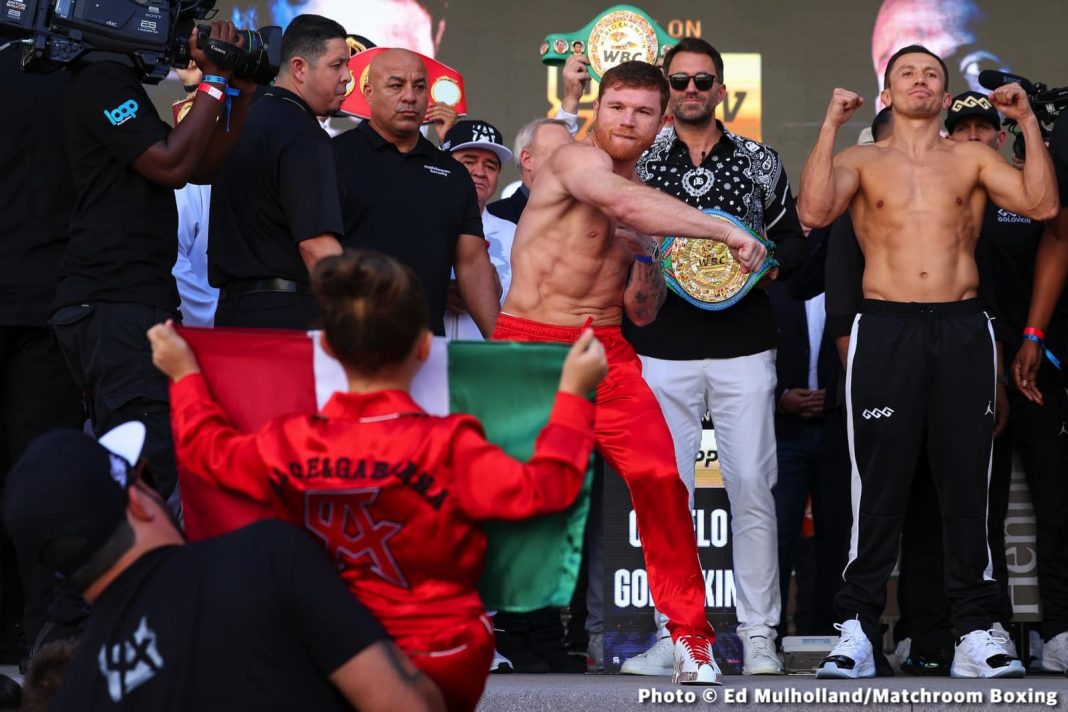 By Jack Tiernan: Eddie Hearn says that a victory for David Benavidez over Caleb ‘Sweethands’ Plant is the type of thing that will put him in a position to get a fight against Canelo Alvarez.

In the next breath, Hearn admits that Canelo is the one that “calls the shots,” and for him, the Benavidez (26-0, 23 KOs) fight doesn’t excite him.

With that said, Hearn thinks there’s always the possibility that Canelo will change his mind about not being interested in fighting Benavidez if he defeats ‘Sweethands’ Plant early next year.

Obviously, for Canelo to change his mind, there would need to be a lot of pressure from the boxing public for him to fight Benavidez, and right now, with him fighting lesser guys, there’s not a huge demand.

While the hardcore boxing fans know who Benavidez is and want to see Canelo face him, the casuals have no clue who he is and don’t care.

You can argue that the casual fans know who Dmitry Bivol is more than they do Benavidez, and he only came to their awareness following his upset win over Canelo last May.

The U.S fans should be more familiar with Benavidez than Bivol, but they’re not because he hasn’t fought anyone well-known enough for them to take notice of him.

Bivol is the guy that Canelo wants to fight next to get revenge for what he did to him, making him look bad in front of his own fans at his usual venue at the T-Mobile Arena.

For Benavidez to jump ahead of Bivol for the Canelo spot, he’s probably going to need an early knockout of Plant next year.

If Benavidez knocks Plant out in the first or second round in January, he should be available to fight Canelo in May.

“It’s a great fight. I don’t think there’s a date or anything. That’s the kind of fight that will put Benavidez in a great position to fight Canelo Alvarez because it’s a fight that will give him profile,” said Eddie Hearn to Fight Hub TV, reacting to David Benavidez fighting Caleb Plant next.

“I don’t know who wins that fight, actually. I think Benavidez, but it’s a really good fight. I’m glad to see it get made. Yeah, business-wise, subject to the deal that everybody wants, but Canelo Alvarez is the boss; he’s the big boss. He’s going to call all the shots always, with me and the fight.

“I know what he’s like. If Benavidez puts in a great performance against Caleb Plant and everyone starts calling for that fight, Saul would have no problem fighting Benavidez, but it’s got to excite him.

“At the moment, he’s never fought anyone, Benavidez. I just don’t think it excites him, but maybe it will after a Plant fight; that’s a great fight,” said Hearn.