Chris Eubank Jr Vs. Liam Smith In Negotiations For Dec.17th At Middleweight 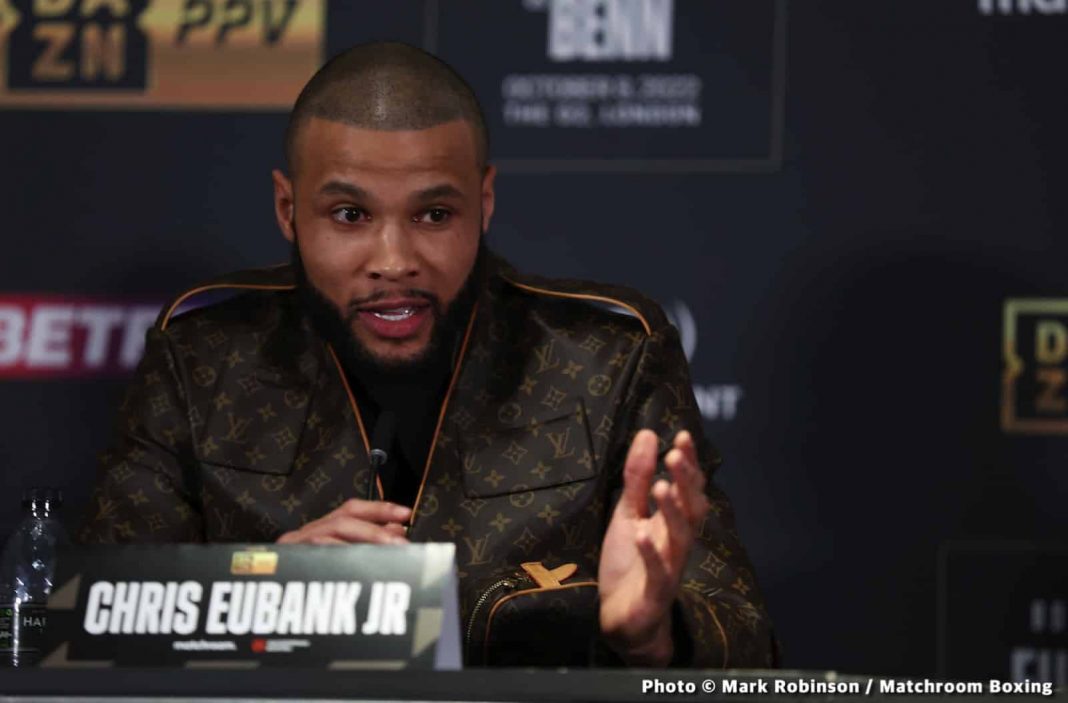 By Charles Brun:  Chris Eubank Jr is negotiating with former WBO junior middleweight champion Liam ‘Beefy’ Smith for a fight that could take place on December 17th or early next year.

If the Eubank Jr vs. Smith fight gets made, it’ll be on box office pay-per-view, which is kind of jarring to think about it.

While British hardcore boxing fans will love the idea of Eubank Jr and ‘Beefy’ Smith mixing it up, people that want to see quality world-level fights will ignore this.

First off, Eubank Jr should be fighting high-level contenders from the 160-lb division at this late stage of his career, not combing the 154-lb ranks for aging past their best fighters.

Eubank Jr, 33, is, once again, aiming low by choosing to take yet another domestic-level opponent in 34-year-old Smith (32-3-1, 19 KOs), but this has been his pattern throughout his 11-year professional career.

Eubank Jr (32-2, 23 KOs) is ready to move forward with his career following his mega-fight with Conor Benn being canceled due to Benn’s positive drug tests for the banned substance clomifene.

Chris Jr going from fighting a welterweight in Benn to now facing a junior middleweight; it makes you wonder if Eubank Jr has self-doubts about whether he can hang with fighters from the 160-lb division.

Instead of fighting Liam Smith, Eubank Jr. should be taking on these guys at middleweight:

It’s unrealistic at this point to expect Eubank Jr to suddenly start aiming high for the world-level contenders at 160. Whatever career ambition Eubank Jr had, it pretty much went out the window after his one-sided 12 round unanimous decision loss to George Groves in the Boxing Super Series in 2018.

“The 33-year-old Brighton middleweight is in talks about a box-office showdown with Liverpool’s Liam Smith. Boxxer and Sky Sports are leading the discussions with December 17 as a proposed date for the duel,” said The Daily Star.

“Negotiations are ongoing with both fighters, and they’ve yet to sign contracts with concerns in both camps about how close the date is. That means it could be pushed back until early next year, but there is an eagerness at Sky to stage the fight in 2022.”

Liam Smith has knocked out his last three opponents, beating Hassan Mwakinyo, Jessie Vargas, and Anthony Fowler. Before that, Smith lost to Magomed Kurbanov by a 12 round decision in 2021.

Smith’s other two losses have come against Munguia and Canelo Alvarez. Interestingly, Smith lost his WBO 154-lb title against Canelo in 2016, and he’s failed to recapture the belt despite that title arguably being the easiest one available during the last six years.