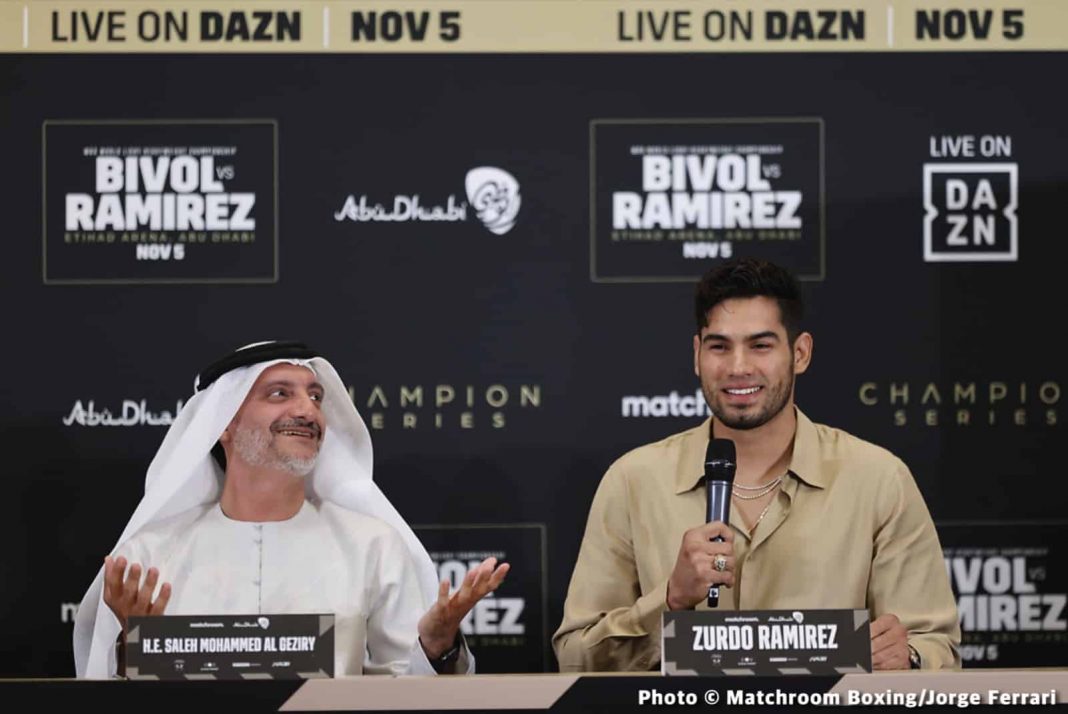 De La Hoya has been dreaming of this moment for the 6’4″ Ramirez (44-0, 30 KOs) since he signed him to his Golden Boy Promotions stable, and now his moment is here.

Ramirez has to make the most of his opportunity because he may not get another one at 175. It took him three years to get to this point, and there are no guarantees he’ll climb his way back into title position if he loses to Bivol on Saturday night.

Ramirez is in a tough spot, given his lack of speed and huge fighting style. He’s not had any experience fighting anyone even close to the ability of Bivol before, and it’s a monstrous step up in class.

Ramirez’s best opponent up to this date is Jesse Hart, who he barely beat on two occasions. Hart would be out of his league against a fighter like Bivol.

“I’ve always felt that Bivol is an amazing fighter and an amazing champion. All my respects to him,” said Oscar De La Hoya to ID Boxing about Saturday’s fight between Dmitry Bivol and Gilberto Ramirez.

If Ramirez loses this fight, he needs to move up to cruiserweight because he doesn’t belong at 175. When you’re rehydrating into the 200s, like Ramirez, that is an indication that you should be fighting at cruiserweight.

“I think this fight is going to be a terrific fight. My guy Zurdo Ramirez he’s in the best shape of his life. He’s ready to go, he’s going to do the best job that he can possibly do, and we’ll see what happens.

“Me as a fan, me as a fighter, I strongly believe Zurdo Ramirez has a tremendous chance of beating Bivol. He has to stay focused; that’s the bottom line,” said De La Hoya when asked what Ramirez must do to beat Bivol.

“I told them just seconds ago, ‘You’re ready, you’re focused, you’re trained hard, this is your moment. The seconds that count are the seconds right before you step into the ring.

“Those are the moments that count. So stay focused, and stay determined; you’ve done all the hard work. Fighters get nervous; they get little butterflies in their stomach. Control them. Once the bell rings, do your job and take care of business.

“I called that fight right from the start. Canelo Alvarez is a small super middleweight at most,” said De La Hoya about Bivol’s win over Canelo last May. “Bivol is a big guy. He’s a big light heavyweight, and so at 175.

“If people are looking at the Canelo fight and judging it and thinking Zurdo Ramirez will be the same test or even easier than Canelo, they have another thing coming. I think Zurdo Ramirez is a bigger fighter, a stronger fighter; he’s a southpaw, and he’s hungrier.

“Guess what? Ramirez is on his way up. Ramirez is hungry. Ramirez is a fighter who wants to taste the glory. That’s going to be the difference right there.

“Look, Canelo has always said that he doesn’t want to fight Mexicans. But even if Bivol wins, I still think Canelo will never beat Bivol. It’s not his style. Styles make fights.

“All I’m hoping for is a great fight on Saturday night. These types of fights that we’re making with Matchroom Boxing, DAZN, and with Golden Boy are the fights that the fans deserve,” said De La Hoya.