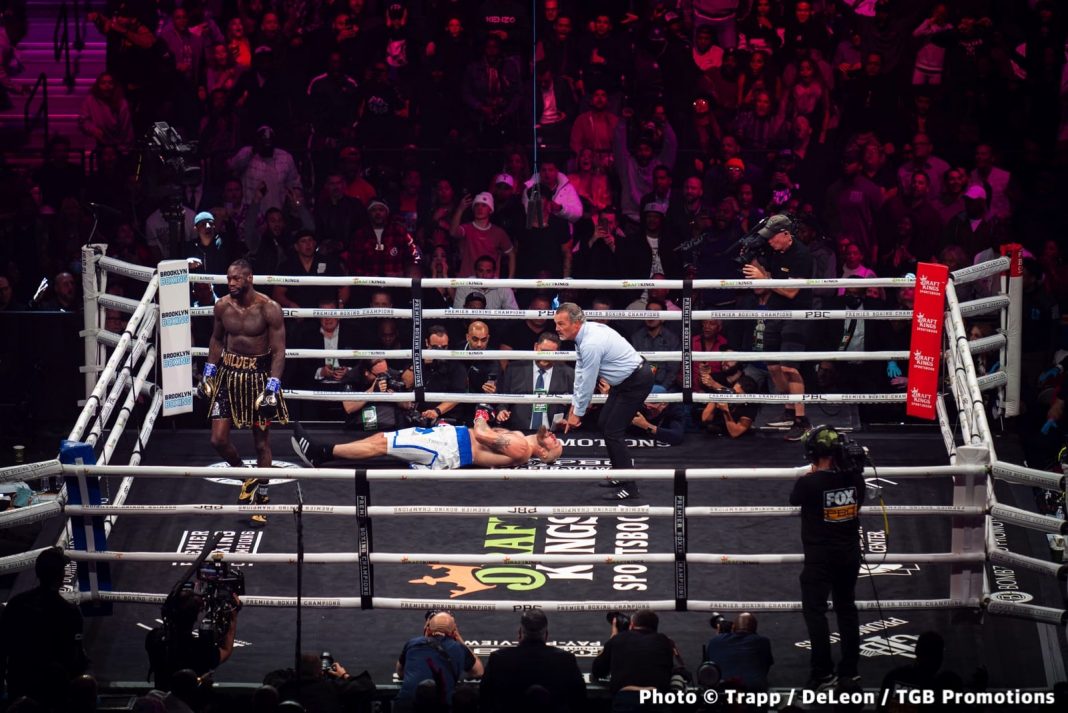 By San Volz: Deontay Wilder’s comeback fight against Robert Helenius pulled in around 75,000 PPV buys for their October 15th contest on FOX Sports pay-per-view at the Barclays Center in Brooklyn, New York.

Wilder knocked out the hapless 38-year-old Helenius in the first round, so the fans didn’t get their money’s worth in this mismatch.

As bad as the main event fight between Wilder and Helenius was on paper, a good proportion of the 75K likely buys on pay-per-view were generated by the co-feature bout between Caleb Plant and Anthony Dirrell. That was the far better fight of the two.

With this arguably non-PPV-worthy fight being sold for $74.99 and competing with the rematch between undisputed lightweight champion Devin Haney and George Kambosos Jr on the same night, the event organizers for Wilder vs. Helenius were asking for trouble.

They should have known going in that Wilder-Helenius wouldn’t interest the boxing fans. We saw the same thing with Andy Ruiz Jr’s last two fights against Luis Ortiz and Chris Arreola being sold on FOX Sports PPV, and neither of those fights pulled in huge numbers, either.

The lesson to be learned from the Wilder vs. Helenius fight is if Deontay wants to fight in pay-per-view fights in the future, he needs to face popular fighters that the boxing public wish to see him compete against.

Wilder’s low pay-per-view numbers could hurt him when it comes to negotiating a fight with Joshua or Fury in the future. Their promoters could look at Wilder’s 75K buys generated for Helenius and view that as their rationale not to give him a good money split.

It would have been a better idea for Wilder’s fight with Helenius to have been shown on regular FOX instead of pay-per-view, but his management went the PPV route.

“The figure includes buys across all platforms, be it linear pay-per-view on cable television and satellite services as well as digital platforms such as PPV. com and FITE. tv.”