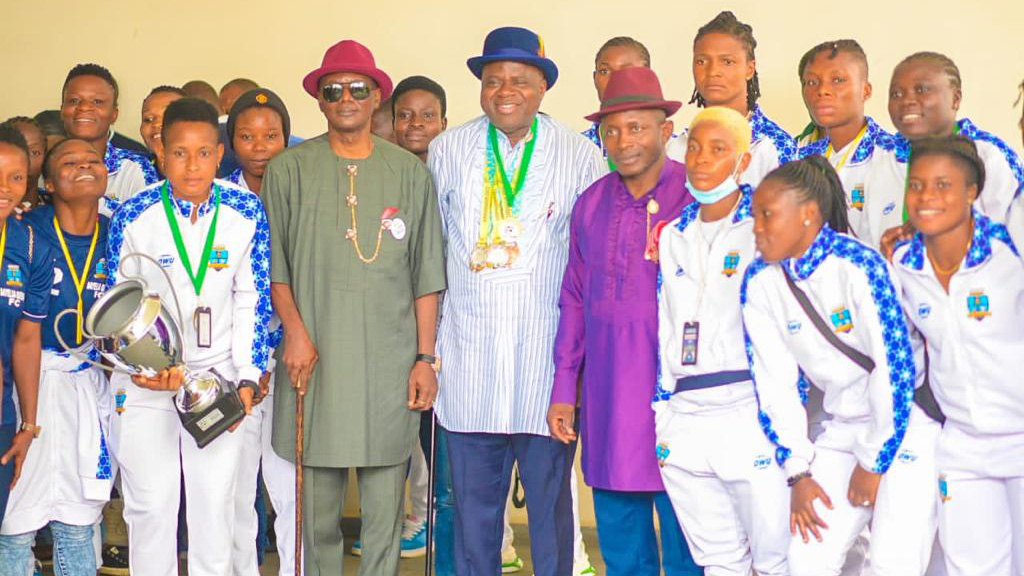 Bayelsa Governor, Senator Douye Diri, yesterday, announced a reward package for sportsmen and women from the state that participated in different competitions recently.

Among the recipients were Olympic silver medalist, Blessing Oborodudu, who won the gold medal in wrestling at the Commonwealth Games, and sprinter, Timma Godbless, who got gold in the 4×100 metres relay for Nigeria in the African Senior Athletics Championships in Mauritius.

Others are teenage table tennis sensation, Samuel Boboye, who won two gold medals for Nigeria in the Africa U-19 Championship in Tunisia and champions of the African Women Champions League WAFU Zone B tournament in Yamoussoukro, Côte d’Ivoire, Bayelsa Queens.

Coaches of the teams were also rewarded.

Diri, while receiving the athletes and footballers inside the executive council chambers of the Government House in Yenagoa, on Tuesday, said they made Nigeria and the state proud.

In a statement by his Chief Press Secretary, Daniel Alabrah, Diri said that the Bayelsa people can hold their heads high because of the sterling performances of the sportsmen and women and urged them to continue on the path of success.

Diri assured that his administration will continue to play its part in supporting sportsmen and women to enable them bring more glory to the state, adding that his government would ensure Bayelsa Queens have hitch-free participation in the African Women Champions League in Morocco.

Similarly, coaches of gold-winning athletes got N2 million each, while their silver and bronze medal counterparts received N1 million and N800, 000 respectively. Non-medal participants at the games also got N300, 000 each.

The governor also motivated Bayelsa Queens with N10 million in addition to $1,000 each for the players and $3,000 for the three goals the team scored in a particular game.

He said: “We are indeed very proud of you. You went out representing not only our state but also Nigeria. You left no one in doubt that you were truly representing Nigeria.

“The people of Bayelsa are holding their heads high because of your sterling performances. Continue on that path. Success is difficult to sustain. People are already planning to overthrow you.

“We followed you, particularly Bayelsa Queens. I spoke with you and made promises, which I have now redeemed. You have done us proud.

“Your state government will make every necessary arrangement for your travel and sustenance. Go to Morocco and conquer. If you deliver, my pronouncement will be more than what I have done today.

“For our commonwealth medalists, we thank you for making Bayelsa and Nigeria proud. We will continue to encourage you in the best way we can. That is the only way you can return to impact value on your state.”

Earlier, Commissioner for Youth and Sports Development, Daniel Igali, thanked the governor for his support for the development of sports in the state, saying it is largely responsible for the successes Bayelsa has had in recent times.

He said winning has become a culture in the state due to the level of motivation from the government and assured that athletes will continue to do their best to make the state proud.