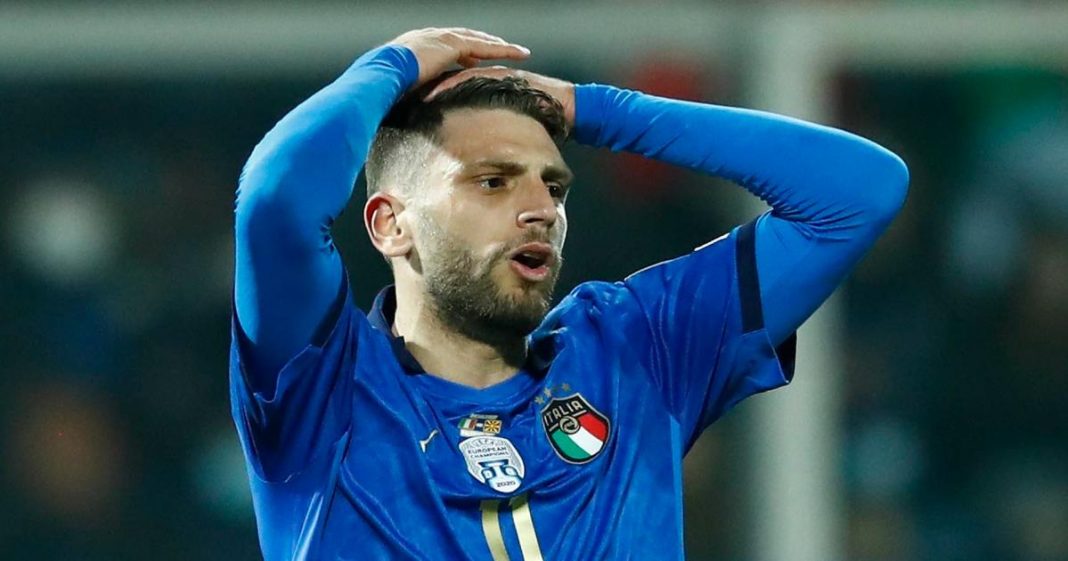 The 2022 World Cup will see 32 nations do battle for one of the most coveted prizes in sport, but while the elite players and teams from all corners of the globe gather in Qatar for a month, some equally famous footballing nations will be forced to watch the action from home.

When the draw was made for the UEFA World Cup qualifying playoffs back in November 2021, we already knew that one of Italy or Portugal would definitely miss out. At one point, we thought we could even see both fail to reach the finals.

Both teams have a long and storied history: Italy have won the World Cup four times, most recently in 2006, and last year claimed the Euro 2020 title, while Portugal were the previous European champions in 2016 and boast the all-time top international men’s goalscorer in Cristiano Ronaldo.

Arguably, both teams should be at the World Cup, but in the end only Portugal made it.

Both finished as runner-up in their respective qualifying groups. Portugal came in second place in Group A, three points behind Serbia. Meanwhile, Italy were second to Switzerland in Group C, with a late penalty miss by Jorginho proving costly as they drew with the Swiss in the penultimate group game.

With each side drawn in the same path in the playoffs, a final between Portugal and Italy appeared to beckon to decide who would reach the World Cup, only for Italy to suffer a shock defeat to North Macedonia in their semifinal.

For Italy, it marked a low point after a period of sustained success. But as we can see here, they will not be alone among top international teams who have failed to qualify for the 2022 World Cup.

These are some of the top sides who will miss out on the 2022 World Cup in Qatar:

Nobody really imagined Italy would fail to qualify for the 2018 finals, so for the Azzurri then to miss out on a second consecutive World Cup was astonishing. After losing to Sweden in the playoffs last time, Italy embarked on a world-record 37-game unbeaten run, winning Euro 2020 at Wembley, but a failure to beat Switzerland and Northern Ireland saw them miss out on an automatic place at this year’s tournament. Then came that remarkable loss to North Macedonia – only their second defeat since September 2018.

Russia were ranked 35th in the previous FIFA rankings. The hosts of the 2018 World Cup came second in 2022 qualifying Group H, one point behind Croatia. They were due to play Poland in the playoffs, but after FIFA and UEFA banned Russian participation amid the conflict in Ukraine, Poland were given a bye and then beat Sweden to book their finals spot.

Twice beaten World Cup finalists, Hungary, who were ranked 41st in the world prior to the World Cup draw, had a poor qualifying campaign. They finished fourth in Group I, behind England, Poland and, notably, Albania. Only Andorra and San Marino, the lowest-ranked team in the world, stopped them from propping up the group.

Norway finished third in Group G. Their 18 points amassed over the course of the campaign are more than five second-placed sides that made it to the playoffs. They will be disappointed to have lost out on a playoff spot to Turkey by a mere three points. Their elimination also means the World Cup will be deprived of talents like Martin Odegaard and Erling Haaland.

Slovakia finished way off the pace in Group H. They were nine points behind group winners Croatia and finished level on 14 points with Slovenia. Slovakia thought they may have had a chance at qualifying after Russia’s ban, but no replacement team was added to the European playoff picture.

Another European team, an indicator of just how competitive UEFA’s qualifying is. Romania missed out by finishing third in Group J. Germany dominated the group, while North Macedonia snuck into second place, with one more point than Romania.

The Republic of Ireland will not be going to the World Cup after coming third in Group A. They finished behind Serbia and Portugal after a disappointing campaign that saw them win just nine points, level with Luxembourg.

The first non-European team on this list, Paraguay had a surprisingly poor campaign. CONMEBOL’s qualifiers are notoriously difficult, and Paraguay struggled. Even with a couple of games still to play, they were already out of the running and won’t be on the plane.

The African qualifiers are just as tricky to navigate, but the two-time African champions will be disappointed with their campaign. They finished second in the group phase, two points behind Cameroon, thereby failing to make the third round.

Mohamed Salah will not be at the World Cup after he was outdone, again, by his former Liverpool teammate Sadio Mane and his Senegal team in the final round of African playoffs, the Senegalese coming through on penalties after two legs in a repeat of the AFCON final.

The World Cup will also be deprived of Algeria’s Riyad Mahrez, after he and his countrymen were surprisingly beaten by Cameroon in their playoff — the Indomitable Lions winning on away goals after a 2-2 aggregate draw to continue their illustrious history at the finals.

Another victim of the CAF playoff structure, Nigeria were denied a place in Qatar after falling to defeat against Ghana in the final round. The Black Stars also used away goals to their advantage after a 1-1 draw over two legs.

World Cup 2022 is taking place in Qatar. Unlike most World Cups, it will not be held during the Northern Hemisphere’s summer. This is because the climate in Qatar is too extreme during that time of year. As such, it will take place from Nov. 20 to Dec. 18.

There has been criticism of the move to reschedule the tournament. The competition will interrupt domestic league seasons that run from July or August to the following May, and there has been concern regarding the workload on players, with the finals condensed into a shorter timeframe and teams given fewer days to prepare.

More: When will the major leagues break for the World Cup?

This World Cup will be the first to be held in the Middle East and only the second in Asia, after the 2002 tournament was co-hosted by South Korea and Japan. It will also be the last tournament to involve 32 teams, with the finals in 2026 set to be expanded to 48 participants.

The games will take place across eight stadia in five different cities in the country. Most of them are being built from scratch, or heavily refurbished, to meet the standards FIFA has in place.