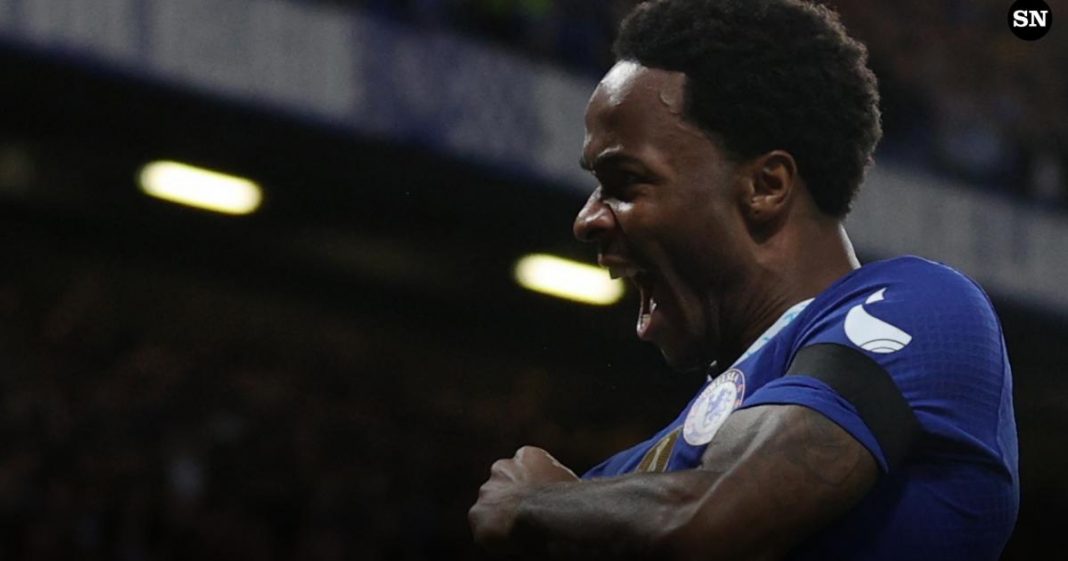 STAMFORD BRIDGE, LONDON — Graham Potter had to settle for a point in his first match in charge of Chelsea as Noah Okafor’s strike earned Salzburg a point at Stamford Bridge.

Raheem Sterling curled in Chelsea’s first goal of their Champions League campaign, sending a classy 48th-minute finish past Philipp Kohn after Salzburg allowed a Mason Mount delivery to roll across the penalty area.

The visitors hit back when Okafor seized on slack defending to steer a low shot beyond Kepa with 15 minutes remaining, sending the Austrian Bundesliga’s noisy supporters wild.

The equaliser ended Potter’s perfect record in his first competitive games in charge of major English clubs, having begun with victories in his previous roles at Swansea and Brighton.

Chelsea, who were booed by small sections of the home crowd at the final whistle, are now two points behind second-placed Dinamo Zagreb in Group E, while unbeaten Salzburg are a point and a place above them.

Chelsea push and push in the final minutes but Salzburg hold on! Boos ring out from a few sections of Stamford Bridge as Potter’s first game in charge ends in a draw.

Our report will appear at the top of this page shortly, and we’ll have more analysis and reaction on the way!

Chelsea are toiling somewhat. Substitute Ziyech goes on a run that produces nothing, then places a header straight at Kohn from a promising position.

Potter rolls the dice in attacking style, Azpilicueta and Kovacic making way for Ziyech and Gallagher.

Salzburg earn a corner on the right. Kepa claims.

Now those away fans are longer than ever! Silva gets it wrong as he tries to stop Adamu reaching a raking long ball, allowing his target to whip in a low cross from the right that Okafor slides beyond Kepa.

Salzburg make a double substitution:  Kameri and Adamu are on for Sesko and Sucic.

Excellent chance for Salzburg! Substitute Gourna-Douath finds Seiwald in space, who plays a cross straight into the feet of Thiago Silva. They’ve been wasteful in attack for most of this game.

The visiting fans will not stop singing. Chelsea fans, in response, are also in full voice.

Salzburg are not out of this and you can guarantee Jaissle will not let them give up.

Sesko shows strength to keep James off him and lofts a shot over the crossbar from a useful position.

Raheem Sterling scores Chelsea’s first goal under Potter! It’s a lovely strike, too, Salzburg’s defence making a hash of clearing a low Mount cross from the right, rolling all the way through to the England forward on the opposite side of the penalty area.

Sterling takes a touch and curls an elegant effort beyond Kohn, dipping under the goalkeeper’s dive and into the far-left hand corner of his net.

Salzburg switch it up for the second half, bringing Gourna-Douath on for Kjaergaard.

Not a huge surprise, given how frustrated their boss looked on the sidelines at times.

Half-time: Chelsea 0-0 Salzburg Chelsea want a penalty right before the break, Cucurella screaming that the ball hit a Salzburg arm from a shot inside the penalty area.

The third minute of injury time ticks by and the game is up for Potter’s first 45 minutes as Chelsea manager! Plenty of endeavour, little cutting edge. The hosts are still seeking their first Champions League goal this season.

Sesko spins outside the penalty area in a central position and curls a low drive towards the far corner of Kepa’s net.

The goalkeeper plunges to tip the effort around the post, and the danger fizzles out from the ensuing corner.​​​​​​

39 min: Mount lashes a shot from the right wide when well-positioned. Chelsea could be two or three ahead by now.

There’s been some sort of issue with the referee’s equipment here, and there’s a break in play while he deals with the problem, during which he calls captains Azpilicueta and Ulmer over.

Chelsea have had seven attempts. Their opponents are yet to have won.

The Salzburg substitutes are warming up.

Jaissle waves his fist and wills his side on after they concede a throw-in deep in Chelsea territory on the right.

Cucurella – Potter’s player of the season at Brighton at the end of the last campaign – has seen plenty of action in this first half.

A perceptive, sharp pass by Sterling finds Aubameyang inside the penalty area, who tries to shoot first time from an angle on the left, only to be denied by an alert Pavlovic block.

The defender springs up, knowing what an important intervention that is.

Sterling looks in the mood tonight, entering the penalty area and releasing Kovacic with a backheel.

The midfielder, who had a miserable return at Zagreb last week, seems taken by surprise by the half-chance.

Sterling shows quick feet inside the penalty area on the left again, failing to get a shot away but winning a corner.

James swings it in and Chelsea fail to capitalise. Then Salzburg bolt down the left and prove equally incapable of adding a shot on target, to the sound of loud cheers from the home fans.

Potter watch: he’s been predominantly standing with arms folded on the touchline, looking less animated on occasion than the frequently gesticulating Jaissle.

The Salzburg manager has gone for white trainers and no socks.

Now Salzburg do try to create something, Kjaergaard entering space on the left and sending in a delivery that no-one is able to meet. That’s more encouraging for the Austrian Bundesliga leaders.

Okafor blocks a Havertz shot from a Cucurella cross. Salzburg are not offering much back at the moment, as boxing parlance might have it.

Chelsea have been dominant with the exception of one early scare: Kepa misplaced a short pass to Jorginho in dangerous territory, and the Blues were rescued by a foul.

Chelsea have made much the better start here, Havertz being at the centre of some of their bright, neat passing in the final third. Aubameyang loses his footing when well-placed, then Sterling cannot quite get a shot away after advancing on the penalty area from the left.

A good early spell of attacking pressure from Chelsea culminates in Aubameyang looping a shot comfortably clear of the crossbar from inside the penalty area on the right. Potter applauds.

A minute’s silence was observed by the entire stadium before kickoff as a mark of respect following the death of Queen Elizabeth II.

15 mins from kickoff: Jaissle looks distinctly cool in the technical area, watching from afar as his players warm up while swigging from a bottle of water.

Members of Chelsea’s new coaching staff, including former full-back Bruno, are out on the turf putting their players through their paces.

30 mins from kickoff: The players are out and warming up!

Ben Chilwell, Wesley Fofana and Kalidou Koulibaly have all been dropped by Potter in his first team selection as Chelsea manager, representing £148 million of signings — the latter two under owner Boehly.

50 mins from kickoff: Both coaches are looking suave in suits tonight. Potter, predictably, took all of the attention as he answered questions from camera crews pitchside, while Salzburg counterpart Matthias Jaissle waited by the tunnel in his.

60 mins from kickoff: Salzburg are three points clear at the top of the Austrian Bundesliga after winning seven of their first eight games of the season, losing the other.

A warning for Potter’s possession philosophy: the visitors took the lead on their way to securing a 1-1 draw at home to AC Milan on Matchday 1 despite only having 34 percent of possession.

90 mins from kickoff: Salzburg’s team is in!

105 mins from kickoff: Potter won his first games in charge of Swansea – with whom he was victorious in his first two Championship games – and Brighton, triumphing 3-0 at Watford in the Premier League.

In the building! 🔵#UCL pic.twitter.com/eJJWZZ6qo3

120 mins from kickoff: Hello and welcome to The Sporting News’ coverage of Chelsea’s first home game and Graham Potter’s first match in charge of the Blues!

The pitch is currently under sprinklers here at Stamford Bridge, presumably the better to welcome the slick style of passing football the coach has become known for during his impressive rise through the ranks, leaving Brighton fourth in the Premier League.

N’Golo Kante remains Chelsea’s major absentee with a hamstring injury. Deadline day signing Denis Zakaria could play in Kante’s defensive midfield role if he is given his debut, the Juventus loanee having been left on the bench in Croatia.

Tuchel admitted that Kepa Arrizabalaga had started against Zagreb partly to give Edouard Mendy a rest, although he also claimed that his regular number one was only fit for the bench because of a patella tendon issue.

Marc Cucurella was player of the season at Potter’s former club, Brighton, last season, which could tempt the new manager to restore the £62 million signing to the starting lineup.

Forward Sekou Koita and defender Kamil Piatkowski did not feature in the 1-1 Champions League draw at home to AC Milan on Tuesday but returned to training afterwards and may have been rested at Ried as a precaution.

MORE: Who owns Chelsea? Who is Todd Boehly and what happened to Roman Abramovich?

How to watch Chelsea vs. RB Salzburg

UK: The Champions League group stage match will be televised on BT Sport 3, and can be streamed on both the BT Sport app and website.

USA: In the United States, the match will be streamed in English on CBS’s subscription-based platform Paramount+ and on the Univision Spanish-language streaming service ViX+.

Canada: Every Champions League match all season long is streamed via DAZN.

Australia: Every Champions League match all season long is streamed via Stan Sport.