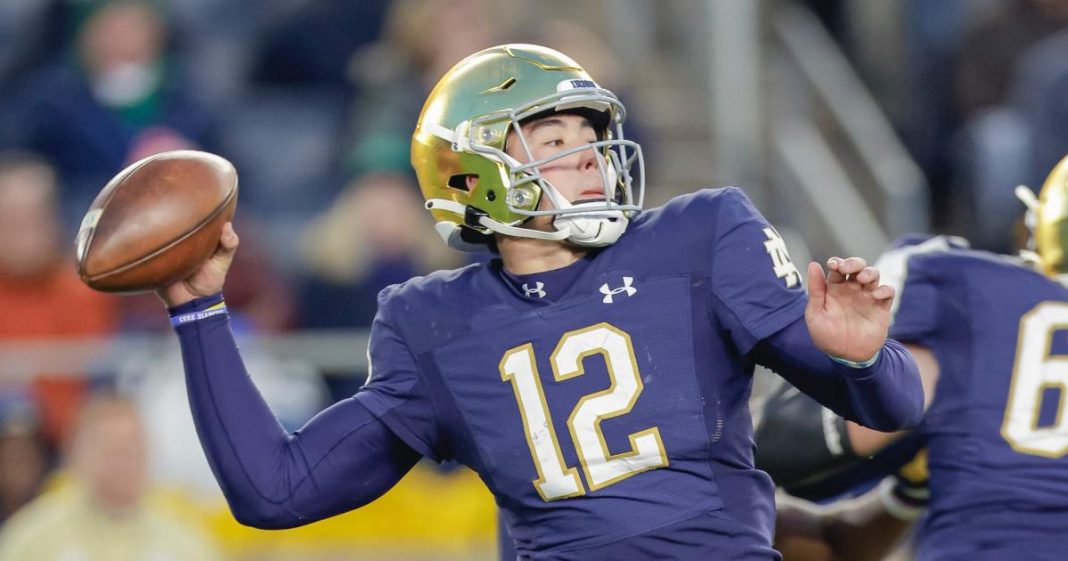 Notre Dame will most likely be without starting quarterback Tyler Buchner for the remainder of the season, coach Marcus Freeman announced on Monday.

Buchner, making only the second start of his Notre Dame career against Marshall on Saturday, exited the 26-21 upset loss late in the fourth quarter. The injury occurred on a quarterback keeper, with Marshall linebacker Eli Neal making the tackle.

It should go without saying, but typically when an arm goes limp like Tyler Buchner’s did after this weight-bearing hit the recovery timeline is substantial.

No official diagnosis on the Notre Dame starting quarterback yet, but that looks like a severe shoulder injury. pic.twitter.com/2vhg7uBdKc

He finished the game completing 18 of 32 passes for two interceptions and 201 yards. For the season, he completed 28 of 50 passes (56 percent) for 378 yards and zero touchdowns to two interceptions.

With that, The Sporting News looks at Buchner’s injury and his timeline to return.

Freeman said at a news conference Monday said Buchner suffered a Grade 5 sprain of the AC joint in his left (non-throwing) shoulder. The injury was serious enough to require surgery and should keep him out around four months — roughly the start of January.

Considering Notre Dame’s 0-2 start to the season, it’s unlikely the Fighting Irish will still be playing in January, the earliest conceivable time Buchner could be cleared to play.

According to UCHealth.com, a joint sprain could be characterized as “an injury of the acromioclavicular (AC) … where the shoulder blade (scapula) meets the collarbone (clavicle).

“The injury typically takes place in the form of a sprain, forcing the tendon apart by some type of blunt force trauma.”

Involves tearing of the joint covering (capsule) and ligaments connecting the shoulder blade (scapula) and collar bone (clavicle), and the end of the collar bone (clavicle) tears through the muscle covering (fascia) above it. Results in a large, permanent bump over the top of the shoulder at the AC joint. Pain typically lasts 4-8 weeks, however chronic discomfort is common. Surgery is frequently recommended.

Who will replace Tyler Buchner?

With Buchner out for the foreseeable future, Notre Dame likely will go with junior backup Drew Pyne, who filled in the final stages of the Marshall loss. He completed 3 of 6 passes for 20 yards and one touchdown to one interception, adding three rushes for 7 yards.

Pyne was the No. 8 pro-style quarterback and No. 225 overall recruit in the 2020 class, per 247Sports’ Composite rankings.

Another option for the Fighting Irish is Steve Angeli, a freshman who ranked as the No. 21 quarterback and 365th-best player in the 2022 recruiting class, per 247Sports Composite.