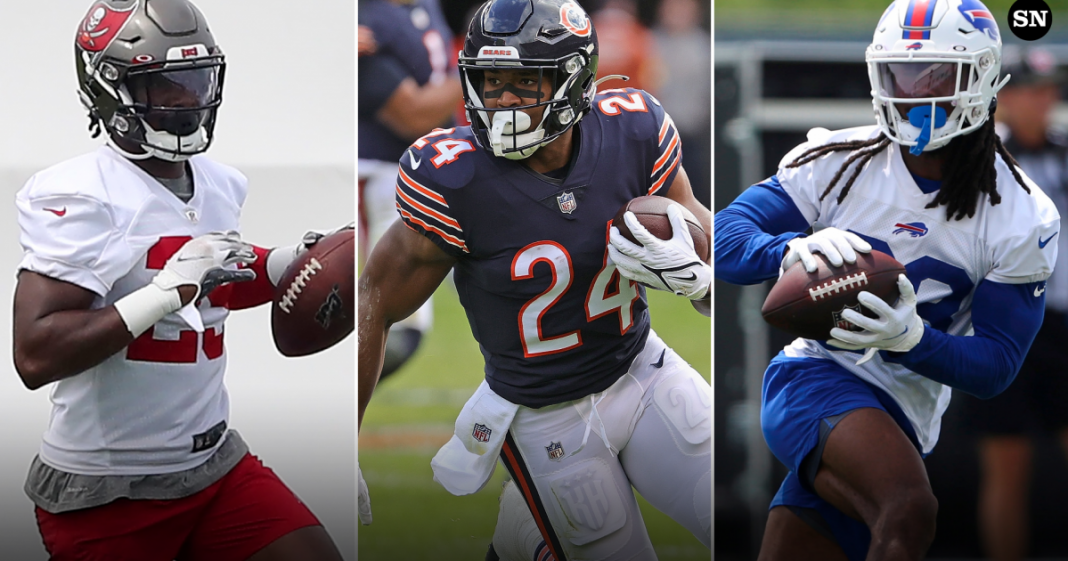 Ahh, the age-old fantasy football term – “sleepers.” Nobody quite knows what it means! We all have some semblance of an idea, but the definition might be a little different for each owner. To some, it means lower-tier, late-round picks who end up being startable assets. To others, it simply means players whose value and production will vastly outperform their preseason rankings and ADPs. Either way, heading into 2022, RB sleepers are once again the hottest commodities heading into drafts, as everyone wants to hit on this year’s big running back breakout.

But, again, the true definition of “sleeper” seems as ambiguous as the true meaning of “MVP.”

The truth is, it doesn’t matter whatsoever how you define “sleeper.” It does, however, matter very much that you get early- to mid-round production from mid- to late-round draft picks. Fantasy championships are rarely won in the first few rounds. It obviously doesn’t hurt to nail your first three picks, but it’s also not the only thing that needs to happen to win it all. Top-heavy teams don’t win in fantasy football.

A sleeper could be a rookie your leaguemates haven’t taken the time to research (Tyler Allgeier or Dameon Pierce, anyone?); it could be an undervalued stud who recently recovered from a major injury (remember Travis Etienne Jr.?); or maybe it’s just a player who seems destined for a bigger role, whether because of talent or the departure of a teammate (see Khalil Herbert, AJ Dillon).

Sometimes, a sleeper is just an extremely valuable handcuff or a back who vaults into RB1/RB2 status the moment the lead back in his offense gets hurt. And plenty of running backs will get hurt. We’re looking at you, Christian McCaffrey, Ezekiel Elliott, and Aaron Jones! These studs’ injuries have paved the way to fantasy relevance for the likes of Chuba Hubbard, Tony Pollard, and the aforementioned Dillon. Those guys weren’t necessarily league-winners, but they certainly helped win a lot of weeks for a lot of teams.

Again, everyone is free to have their own rules and parameters for the term “sleeper,” but there’s one thing we can all agree on: The more sleepers you research, draft, and turn into week-winning starters, the better your chances of achieving fantasy glory this winter. You don’t have to enjoy vocabulary to comprehend the science of winning.

Let’s get to our sleepers. The following 12 RBs stand out to us as potential X-factors who seem to be too low on most rankings lists, mock drafts, or ADPs.

Dameon Pierce, Texans. A bruising beast of a 5-10, 220-pound back, Pierce’s highlight reel at Florida makes him look like a distant relative of Marshawn Lynch. He obviously doesn’t have the downhill speed or between-the-tackle abilities of Beast Mode, but he could certainly be good enough to surmount Marlon Mack and Rex Burkhead on the Texans’ depth chart. (Update: Mack was cut in late August.) And even if Houston’s offensive line has another terrible campaign, Pierce should get the majority of whatever goal-line snaps the Texans rack up.

Travis Etienne Jr, Jaguars. After an outstanding college career at Clemson, Etienne was selected No. 25 overall by the Jaguars in the 2021 NFL Draft. Expectations were high for his reunion with Jags QB and former Clemson teammate Trevor Lawrence, but a Lisfranc injury in Etienne’s left foot sidelined him for the entire season. Etienne should be ready for Week 1 while fellow Jacksonville RB James Robinson recovers from a torn left Achilles sustained last December.

At 5-10, 210 pounds, Etienne has the size, speed, and hands to be an immediate impact-player in Doug Pederson’s brand-new offense. He has 4.45-speed and elite pass-catching skills, owning all sorts of NCAA records. In 55 career games with the Tigers (1,852 snaps), Etienne rushed 686 times for 4,952 yards with 70 rushing touchdowns, and caught 102 passes for 1,155 and eight receiving touchdowns. He’s a stud with RB1 upside in what should be a revamped offense, but most owners are leery after the injury. Take advantage.

Rachaad White, Buccaneers. Here’s another rookie who should walk right into the No. 2 RB role for a strong offensive team. Leonard Fournette seems to have a good season every other year, and last year was a good year for the five-year back (it’s science!). Plus, the 27-year-old has played just 63 games over five NFL seasons (12.6 games per season). Not great, Bob!

White might not profile as a highlight-reel guy, but he has decent speed and vision for a 6-0, 214-pound back, and Tom Brady should get the most out of him. White showed his all-around skills during his final season at Arizona State when he ran for 1,000 yards (5.5 yards per carry), caught 43 passes for 456 yards, and scored 16 total TDs. For a late-round flier, you’re better off with White than with another Darrel Williams’ dart throw.

AJ Dillon, Packers. With Packers lead back Aaron Jones seemingly always getting dinged with injuries, Dillon serves as one of the most intriguing handcuffs in fantasy. The 6-0, 250-pound BC product known as ‘Quadzilla’ scored 109.5 non-PPR fantasy points between Week 1 and Week 14 of ’21 (25th among RBs), and 144.5 standard points through Week 17 (20th). That puts him in RB2/flex territory!

Also worth consideration, Jones scored just four TDs in 32 red-zone attempts last season, while Dillon scored five TDs in just 21 attempts inside the opponents’ 10. There’s also the possibility Green Bay simply runs more given the loss of Davante Adams. Dillon could be hot fire this NFL season as he continues his ascent in the Packers backfield, but his price tag still is that of a mere “high-usage handcuff.”

James Cook, Bills. Another talented rookie RB, Cook could supplant Devin Singletary and Zack Moss on the Bills’ depth chart by Week 3. The Georgia product might not have the vision of the aforementioned Walker, but he makes up for it with 4.4-speed and phenomenal pass-catching skills. Cook averaged 6.4 yards per carry and 10.5 yards per reception in his senior season with the Bulldogs, and he could be an instant-impact player in Josh Allen’s electric offense. Cook in the late middle rounds would be quite the get.

​​Tyler Allgeier, Falcons. Allgeier has great instincts for a back with a 5-11, 224-pound frame. He’s a good cutter and very tough off tackles, but he lacks elite burst. Either way, the cupboard is pretty barren in the Atlanta RB room, as 31-year-old converted WR Cordarrelle Patterson is still the leader. Allgeier could pave his way to a decent role in a Falcons offense that doesn’t have much to lose.

We have a tough time envisioning Patterson recreating the magic run he enjoyed in 2021, Mike Davis has moved his mediocrity to Baltimore, and Damien Williams never poses much of a threat to the playing time of any halfway-decent back. After running for 1,601 yards (5.8 yards per carry), catching a respectable 28 passes for 199 yards, and scoring 23 total TDs during his final season at BYU, Allgeier seems ready to take the next step. He’s bound to be undervalued in drafts.

Khalil Herbert, Bears. Herbert made the most of his 103 carries and 16 targets in his rookie season, netting 4.2 yards per carry and hauling in 14 catches. He only scored one touchdown, but touchdown dances are pretty rare for guys getting eight total red-zone attempts. Chicago (6-11) averaged just 1.4 red-zone touchdowns and just 18.3 total points per game last season, so there’s plenty of room for positive offensive regression. David Montgomery has averaged just 11.6 starts across his three NFL seasons, so there might be room for Herbert to make some noise and even potentially take over the lead role.

Clyde Edwards-Helaire, Chiefs. Yes, we’re calling this former fantasy bust a sleeper. The Chiefs look much different without speedy three-time All-Pro Tyreek Hill, and Edwards-Helaire could be the primary benefactor of the wideout’s departure. Still just 23, CEH has certainly underwhelmed through two NFL seasons, but it’s important to note that he can’t help injuries or his own usage rate.

Known as a strong pass-catcher out of the backfield from his LSU days, Edwards-Helaire only garnered 23 targets across his 10 games in 2021. That’s a 6.3-percent target share. His role in the passing game last season makes zero sense and seems destined for positive regression. Edwards-Helaire caught 82.6 percent of his targets in ‘21, gaining an average of 6.8 yards per reception. He also hovered right around his ‘20 average of 4.4 yards per carry, and scored four touchdowns in his measly seven carries inside the opponents’ 10-yard line (he had just 12 red-zone attempts all season).

Patrick Mahomes will need to utilize his feature back if he wants to once again maintain the league’s top red-zone and third- and fourth-down offense. Edwards-Helaire still has RB1 upside, only now you can get it for a fraction of the price you paid two years ago.

Kenneth Walker III, Seahawks. Walker has elusive change-of-direction abilities, amazing quickness to get to the edge, and tremendous breakaway speed. His vision, footwork, and burst with Michigan State last year — where he scored 19 total touchdowns — made him look like LaDainian Tomlinson lite. Seahawks fans lamenting the loss of Russell Wilson to Denver should take solace in the fact that they finally have an above-average rusher on their depth chart.

Walker’s current ADP of 90 is either a sign that most fair-weather football fans have never heard of him or that Seattle’s o-line and semi-jumbled backfield scares the crap out of everyone. Rookies tend to pick up steam throughout August, so it’s tough to say where his final ADP will wind up, but he has the potential to outproduce a mid-round valuation if he’s getting the bulk of the carries. A slow start to the season after hernia issues is likely, but it’s all about the long game with Walker.

Tony Pollard, Cowboys. Like Dillon, Pollard seems like a very valuable asset as a handcuff. Ezekiel Elliott seems to have aged in dog years, exemplified by both his usage and production last season. Despite playing the most games of any season in his professional career, Zeke averaged a career-low 13.9 rushing attempts per game. He also had career lows in rushing yards per game (58.9) and receiving yards per game (16.9) and maintained his second-worst catch rate (72.3 percent).

Pollard, meanwhile, tied for second among NFL RBs with 5.5 yards per carry. Pollard is a spry 25, while Zeke often looks like an old 27. With the Cowboys’ relatively-easy schedule and strong o-line, Pollard is a high-upside “handcuff” who could be an every-week fantasy starter with just a slightly increased role.

Granted, that’s not saying much with Joshua Kelley and Larry Rountree III on the depth chart. Spiller is probably a ways away from being an effective three-down back, and the Bolts have a brutal schedule for the ground game, so temper your expectations a bit. Still, a handcuff is a handcuff, and Justin Herbert’s No. 2 RB will always have value. We expect Spiller to have that role relatively early in the season.