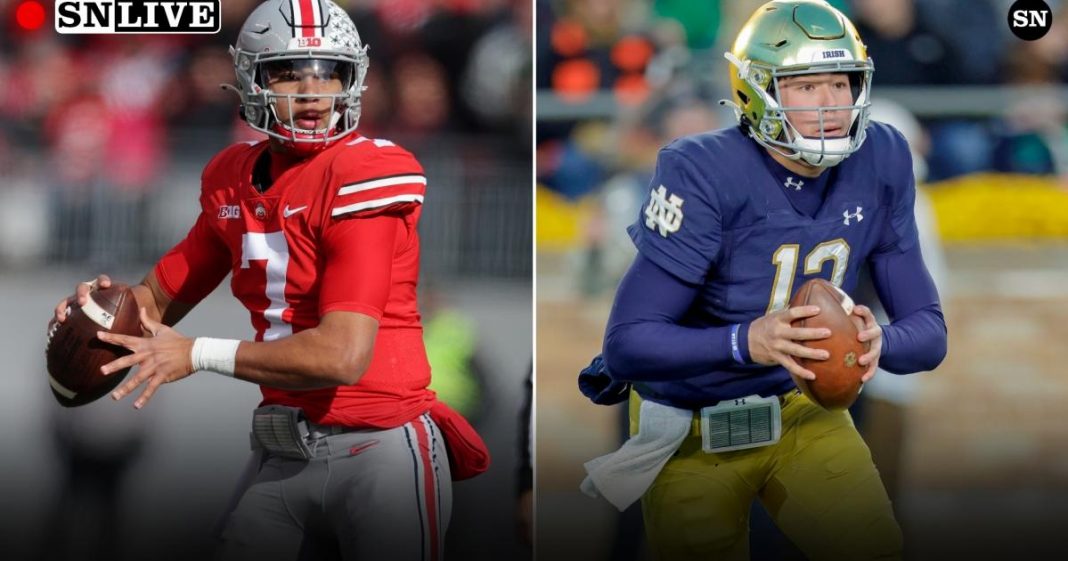 That’s what’s on tap on Saturday, as No. 2 Ohio State hosts No. 5 Notre Dame in a showdown of perennial title contenders.

The Buckeyes come into the season off a relatively disappointing 2021 season. While they boasted the No. 1 scoring and yardage offense in college football, they lost an early non-conference matchup to Oregon and dropped its first Big Ten game in the Ryan Day era to rival Michigan. But with C.J. Stroud returning under center, Jaxon Smith-Njigba leading a deep receiving corps and TreVeyon Henderson at running back, Ohio State should remain one of the most explosive offenses in the sport.

Notre Dame is coming into the season in a year of change. The Fighting Irish will be entering the Marcus Freeman era, officially, in his first season as the team’s head coach. Notre Dame will be replacing both starters in the backfield, as quarterback Jack Coan and running back Kyren Williams are off to the NFL. Tyler Buchner, last season’s backup, will start at quarterback and Audric Estime and Chris Tyree enter the year as the lead running backs.

The Sporting News is tracking live updates and highlights from Ohio State vs. Notre Dame. Follow along for complete results.

8:15 p.m.: Two straight passes out to Mayer only gets them up to the 31. 3rd-and-4 with under five minutes left in the quarter.

8:14 p.m.: Kickoff after another Notre Dame penalty is a touchback, and the Fighting Irish will come out to the 25.

8:09 p.m. Ohio State scoring play: Egbuka catches a short pass behind the corner, and takes it to the end zone for a touchdown. Ohio State takes a 7-3 lead.

8:07 p.m.: Stroud throws a dime to Marvin Harrison Jr. in the end zone, and he nearly had it, but Harrison couldn’t hold onto the catch after he hit the ground. Incomplete pass.

8:05 p.m.: Ohio State will start its second drive from its own 46. Smith-Njigba catches a short pass for a gain of four out to the 50. Stroud’s next pass is incomplete, but Notre Dame is hit with a pass interference penalty trying to cover Egbuka. Ohio State first down at the Notre Dame 35 with less than 6:26 in the quarter.

8:04 p.m.: Buchner finds Michael Mayer for the star tight end’s first reception of the game, but it’s for only six yards, and he’s stopped by Lathan Ransom a yard shy of the first. Notre Dame out to punt from Notre Dame’s 14.

8 p.m.: Notre Dame has to burn a timeout as the Fighting Irish nearly took a delay of game penalty.

7:58 p.m.: False start by Notre Dame backs them up half the distance to the goal, and the Fighting Irish will move back to their own 2.

7:57 p.m.: J.T. Tuimoloau again breaks through the line and stops Estime for a loss of two.

7:57 p.m.: Great punt from Jesse Mirco as his punt bounces at the 3 and rolls back to the Notre Dame 5, where it is stopped. Fighting Irish will take over possession with 10:04 in the quarter.

7:56 p.m.: Stround finds Egbuka for a gain of 8, but it’s not enough for the first down. Ohio State will have to punt from its own 47 with just over 10 minutes left in the quarter.

7:55 p.m.: Notre Dame dials up a blitz, and it gets to C.J. Stroud, and he’s sacked for a loss of five. His next pass is incomplete out to Jaxon Smith-Njigba. Third-and-15 for the Buckeyes.

7:53 p.m.: TreVeyon Henderson rushes ahead for four yards, and there’s a penalty. Penalty on Notre Dame moves the Buckeyes up 15 yards to the Ohio State 44.

7:52 p.m.: Emeke Egbuka returns the kickoff out to the 25-yard line, and the Ohio State offense will come out for the first time today.

7:49 p.m. Notre Dame scoring play: Notre Dame is on the board with a 33-yard field goal. Big play to start the drive, but stalled out after the lone first down. Notre Dame takes a 3-0 lead.

7:49 p.m.: Tyler Buchner tackled on a QB draw for a gain of one, and Notre Dame will bring out the field goal unit.

7:46 p.m.: Big play for Notre Dame to start the game on offense as Lorenzo Styles takes the reception 54 yards down the sideline. Tack on 15 yards for a penalty, and Notre Dame is out at Ohio State’s 16.

Notre Dame gained huge yards on the first play of the game 😤 pic.twitter.com/At7xaIOn0Y

7:45 p.m.: The kick is away, and this game is underway. Chris Tyree returned the kick and was stopped right around the 15-yard line.

7:42 p.m.: Notre Dame will start the game on offense after Ohio State won the toss, and deferred.

7:37 p.m.: Ohio State is taking the field for its game against Notre Dame. Packed house in Columbus welcomes them with a loud ovation.

7:07 p.m.: The former Buckeyes and big-name athletes are in Columbus for this contest. LeBron James, Justin Fields, Joe Burrow, Ezekiel Elliott and more spotted at the game.

.@KingJames is feelin’ the energy as his son Bronny James visits Ohio State.

The No. 2 #Buckeyes kick off against No. 5 #NotreDame in Ohio State’s first-ever top-five season opener tonight.@LanternSports pic.twitter.com/sHJ0K2UGXw

Joe Burrow in the house. pic.twitter.com/kIQyE22XUO

Name a former Buckeye and they are IN THE BUILDING tonight.

How to watch Ohio State vs. Notre Dame

The matchup between the Buckeyes and the Fighting Irish will be broadcast nationally on ABC. Chris Fowler and Kirk Herbstreit will be on the call of the game.

Viewers can stream the game on the ESPN app or with ESPN+. Viewers will also have the option to stream ABC’s coverage with fuboTV, which offers a free trial.

What time does Ohio State vs. Notre Dame start?