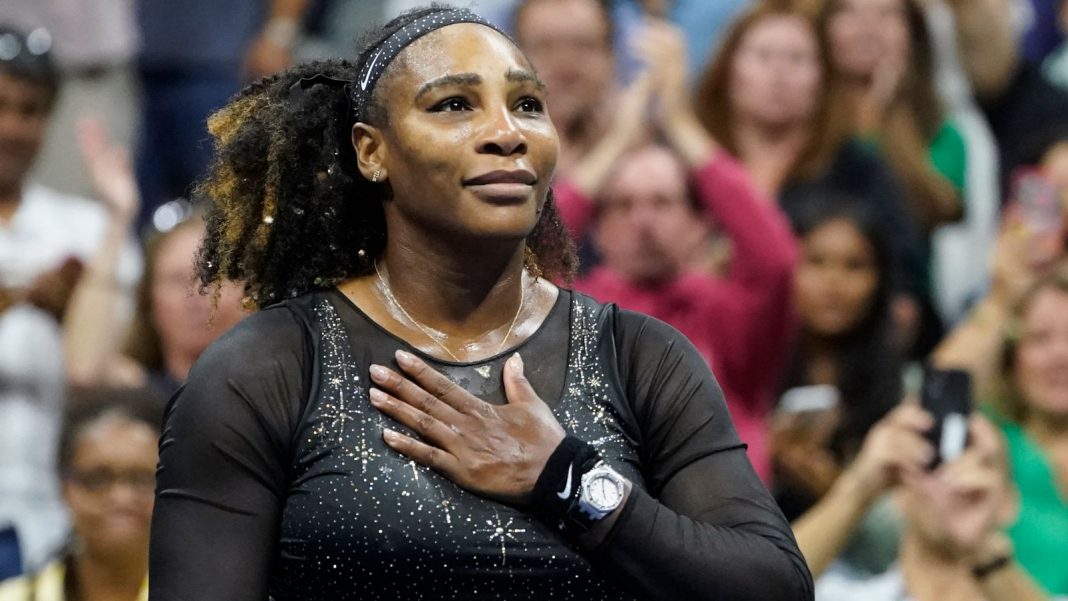 Serena Williams saw her US Open dreams shattered in the third round to Ajla Tomljanovic in what is expected to be her final competitive tennis match.

Williams’ performances against Danka Kovinic and Anett Kontaveit had given hope to the tens of thousands who have flocked to Flushing Meadows hoping her swansong could have a fairy-tale ending.

But, despite a memorable second-set fightback in a raucous atmosphere, there will be no record-equalling 24th Grand Slam singles title.

The gritty Tomljanovic needed six match points to deliver the knockout punch and bring an end to an engrossing three-plus-hour slugfest, winning 7-5 6-7 (7-4) 6-1.

The 40-year-old, who played her first professional tennis match back in 1995, walked calmly to the net before waving to all sides of Arthur Ashe Stadium while ‘Simply The Best’ played over the loudspeakers.

Addressing the crowd through tears, Williams said: “Thank you so much, you guys were amazing. I tried. Thank you Daddy, I know you’re watching. Thanks Mom.

“I just thank everyone that’s here, that’s been on my side for so many years, literally decades, But it all started with my parents and they deserve everything so I’m really grateful for them. And I wouldn’t be Serena if there wasn’t Venus, so thank you Venus. It’s been a fun ride.”

Asked whether there could be another chapter, Williams added: “I don’t think so, but you never know.”

Williams, who again took her entrance after a montage hailing her greatness, made a nervous start and dropped serve straight away but she quickly rallied, broke Tomljanovic back again and began to get on top.

Williams’ movement was sharp and her groundstrokes strong, and Arthur Ashe was ready to celebrate another set in the bag when she broke serve again to lead 5-3.

But Williams, who has played very little tennis in the last 18 months, tightened up at just the wrong moment, struggled to find her serve and Tomljanovic clinched the set with four games in a row.

The 29-year-old was looking to reach the fourth round in New York for the first time but she is no stranger to the second week of slams having made back-to-back Wimbledon quarter-finals.

This occasion, of course, was something completely new and she felt the full force of Williams’ frustration at having let the first set slip away.

With her serve now engaged, the 40-year-old stormed into a 4-0 lead. Back came Tomljanovic with two games in a row, and the Australian pushed for another break but Williams dug deep and roared long and loud when she held on.

But again she struggled to get over the line, failing to convert four set points in a long eighth game and then giving up her serve as Tomljanovic levelled at 5-5.

At 4-4 in the tie-break, Williams was three points away from the end, but she took a deep breath, served an ace and forced a decider.

The delirious crowd were on their feet, and Williams began the third set in perfect fashion by again breaking the Tomljanovic serve.

But, with the match approaching the three-hour mark, the physical effort Williams had put in began to take its toll and she had little more left to give.

At 5-1, Williams was given a pre-emptive standing ovation. She hung on grimly, saving five match points in vintage fashion, but with the sixth it was all over.

Tomljanovic, who will next play Liudmila Samsonova, described the moment as “surreal”.

She said: “I’m feeling really sorry just because I love Serena just as much as you guys do. What she’s done for the sport of tennis is incredible. I never thought I’d have the chance to play her in her last match when I was a kid watching all those finals.”

Coco Gauff proved too strong for former finalist Madison Keys in their all-American duel, racing to a 6-2 6-3 win in just over an hour.

The 18-year-old Gauff, who was once again called on to warm up Arthur Ashe Stadium court for Serena Williams ahead of her compatriot’s highly-anticipated night match, has now made the second week of all four Grand Slams.

The French Open finalist, who improved to 11-3 at majors this year, said she was honoured to open up for Williams at Flushing Meadows for the third time and would be again glued to her idol’s match.

“It’s been amazing. I haven’t missed it,” Gauff said.

“Even the day when I watched it on TV I had to order room service. I know she’s on my side of the draw and I don’t know when I might face her but that’s the goal.”

Gauff will be the favourite when she takes on China’s Zhang Shuai on Sunday.

“Crazy match,” Jabeur said. “Even down 5-1, 40-love she doesn’t make the mission easy for me. I’m very happy that I kept fighting and went until the end.”