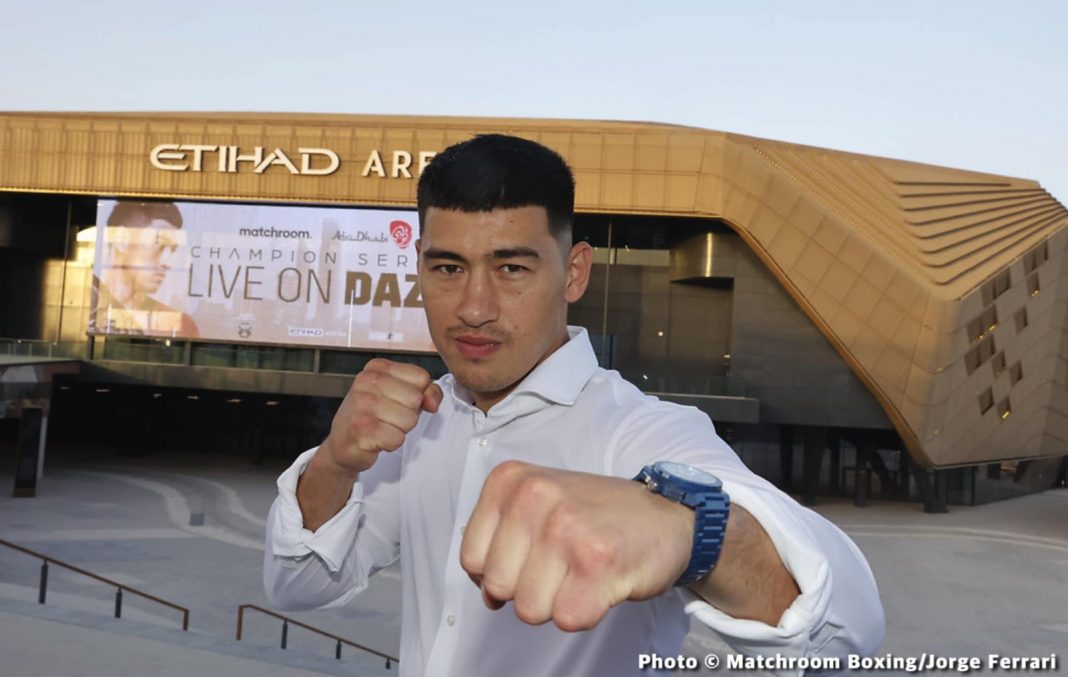 By Brian Webber: Dmitry Bivol isn’t sure if a rematch between him and Canelo Alvarez will happen because there are a lot of variables that could get in the way of the fight happening.

Canelo himself has already set a condition for the Bivol (21-0, 10 KOs) taking place, saying that he needs to defeat his WBA mandatory challenger Gilberto ‘Zurdo’ Ramirez on November 5th for it to happen.

However, WBA light heavyweight champion Bivol says he has his own path that he’s following and isn’t dependent on a second fight with Canelo.

Bivol says he’s happy with his win last May over the Mexican superstar, and he’s content to go his way, fighting Zurdo on November 5th and then potentially IBF/WBC/WBO light heavyweight champion Artur Beterbiev.

The one that needs the rematch is Canelo, as he was soundly beaten by Bivol, and he has a lot of proving to do to his boxing fans to show that the loss was just an aberration.

Interestingly, Canelo appears to be setting up hoops for Bivol to jump through for the rematch, which is an odd thing to do. The way that Canelo is talking, it’s as if Bivol were the one that lost last May instead of himself.

It’s going to look bad for Canelo if he doesn’t at least try and avenge his loss to Bivol. The scores were razor-close at 115-113 x 3, and you would think that Canelo would be able to make minor corrections to his game to get the victory in the rematch.

Of course, many boxing fans disagreed with the scoring for the Canelo-Bivol fight, believing that Bivol deserved a wide 119-109 victory instead of the three 115-113 scores handed in by the Nevada State judges that worked the fight in Las Vegas.

“I will have a long training camp, and all of my sparring partners will be southpaws,” said Dmitry Bivol to Fighthype about his preparation for his November 5th fight against challenger Gilberto Ramirez.

“We will create something. I got too much respect for this fight. Many people glad for me who don’t believe me, and I did it,” said Bivol about his upset victory over Canelo Alvarez.

“Some people are glad for me because they put money on me. People know me not much more than before, but in American supermarkets, many people know me, and many Mexicans know me.

“I don’t know if there will be a rematch [with Canelo] or not. Now, it doesn’t matter to me because I’m focused on Zurdo. He’s a dangerous opponent. I have to beat him.

“Of course, why not? If he wants, we can make a deal,” Bivol said about fighting Canelo.

“I wanted a fight against Buatsi because I had an offer. You have a date, you have an opponent, and you have a place; of course, I wanted to fight, but then things changed.

“I was a little bit confused when this fight would be and where. Now I’m glad things happened like this because I wanted to fight Zurdo. Many years ago. Every fight, I think, ‘Maybe my next fight will be Zurdo.’

“He talks about our fight, and he’s a good opponent. I want to fight an opponent like Zurdo because he has 44 fights and no defeats. It’s a good challenge.

“Last year, Zurdo talked many things. If we believe in what he said, it’s not good. Of course, he’s one of the best at light heavyweight, and me one of the best, and Artur Beterbiev. We will see on November 5th.

“He had a deal to fight me and Golovkin. It makes business sense. It’s okay. I have my own road. I beat him, and I’m glad. I have to move forward. I don’t need this fight against Canelo.

“Maybe earn money. It’s not the main thing. Of course, money is one of the main things, but it’s not main. If I thought only about money, I wouldn’t be here.

“For this fight, I earned the same money against Canelo. Of course, it’s a little bit harder because I spent a lot of emotions on the fight against Canelo, and now I have to push myself, be focused, and push myself in training and forget about Canelo and think about only Zurdo.

“Your right, 100%. They are two different fighters, except that they’re both Mexicans,” said Bivol about Ramirez and Canelo.

“Of course, I think Zurdo will push more and try and use his size and try and punch my body more than Canelo. He has longer arms than Canelo, and I think he’s going to bet on his side and all on pushing me.

“We support GGG,” said Bivol when asked who wins the trilogy match between Canelo Alvarez and Gennadiy Golovkin. “I’m glad. I feel like I’m getting to the point where I was going towards.

“I accomplished some kind of recognition that I was aiming towards in the boxing game,” said Bivol.