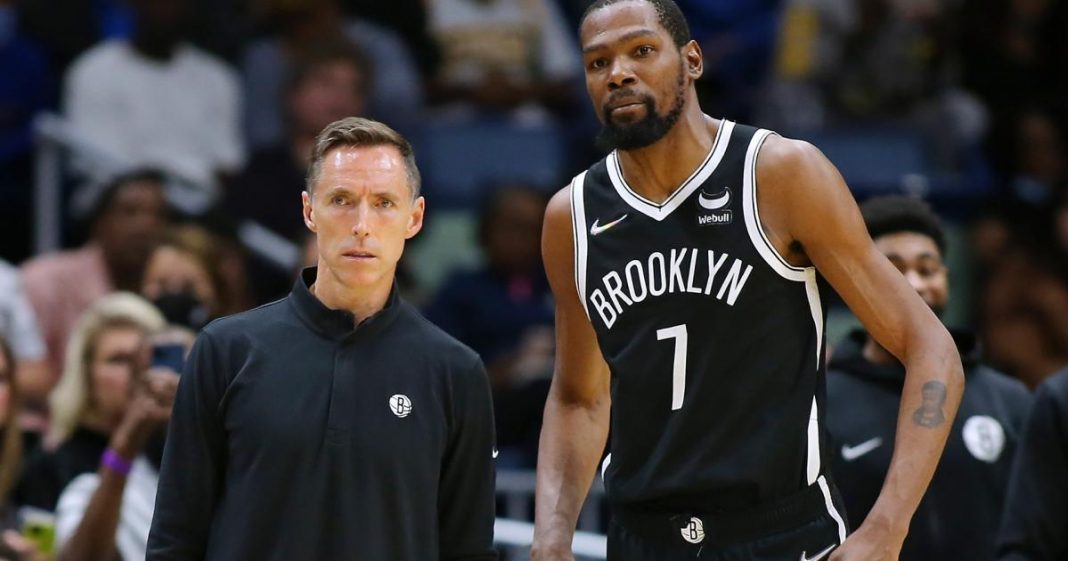 The biggest story of the 2022 NBA offseason has officially come to a close.

On Tuesday, Nets general manager Sean Marks shared a press release stating that All-Star forward Kevin Durant — who reportedly requested a trade back on June 30 — will remain in Brooklyn.

“Steve Nash and I, together with Joe Tsai and Clara Wu Tsai, met with Kevin Durant and Rich Kleiman in Los Angeles yesterday. We have agreed to move forward with our partnership. We are focusing on basketball, with one collective goal in mind: build a lasting franchise to bring a championship to Brooklyn.”

A back-and-forth saga that took nearly the entire offseason to be settled, take a look at the step-by-step timeline as it all unfolded, from the very first trade request through to the mutual decision to remain in Brooklyn.

MORE: What Durant’s decision means for Nets and rest of NBA

Kyrie Irving, Nets at an “impasse”

The Nets’ offseason started with Irving, who faced the decision of picking up his player option to remain in Brooklyn, signing a contract extension with the Nets or entering unrestricted free agency.

The Athletic’s Shams Charania reported that Irving and the Nets were at an “impasse” that could clear the way for Irving to “consider the open marketplace.”

The Lakers, Knicks and Clippers were expected to be among the suitors for Irving if he left the Nets.

A few days after the report that Irving and the Nets were at an “impasse” in contract discussions, The Athletic’s Shams Charania reported that Durant was “monitoring” the team’s situation and “considering options with his future.”

At that time, it was unclear whether Durant, who is under contract through the 2025-26 season, would request a trade if Irving didn’t re-sign with the Nets.

Just one week after it was reported that Irving and the Nets were at an “impasse” in contract discussions, causing Durant to “consider options with his future,” Irving surprisingly picked up his $37 million player option to remain in Brooklyn for the 2022-23 season.

On June 30, The Athletic’s Shams Charania reported that Durant had requested a trade from the Nets despite Irving picking up his player option for the 2022-23 season.

Shortly after his trade request went public, ESPN’s Adrian Wojnarowski reported that the Suns and Heat were “among two of the teams” on Durant’s wish list, but the Nets planned to move the 12-time All-Star “where they can get the best possible deal.”

He added that in wake of Durant’s trade request, Brooklyn’s entire roster was available to discuss in trades.

Kevin Durant “gone dark” on communication with others

A week after his trade request, Yahoo Sports’ Chris Haynes reported that numerous stars tried to get in touch with Durant to “pick his brain,” but Durant had “gone dark” and was not answering anyone’s texts or phone calls.

While you would expect the trade market to be booming for one of the best players in the league, ESPN’s Brian Windhorst reported that the bidding war “(wasn’t) really hot right now” on July 7. He added there could be a “restart in action” as team executives gathered to meet in Las Vegas for Summer League, but as we know now, it never truly heated up.

The Nets were reportedly not happy with the trade offers they had received for the two-time Finals MVP and began to prepare to keep Durant on the roster into the 2022-23 season. They were willing to be patient to receive “an appropriate return for a player who still had four years left on his contract.”

Trade talks “slowed to a trickle”

Trade talks involving Durant had “slowed to a trickle,” according to ESPN’s Brian Windhorst. The Nets weren’t aggressively making outgoing calls and the league was ready to go on their “first significant vacation in two years.”

Five days after Durant trade talks reportedly “slowed to a trickle,” rumors heated up quickly when ESPN’s Adrian Wojnarowski reported that the Eastern Conference champion Celtics “emerged among teams engaged in talks” on a deal for the four-time scoring champion.

Hours after Wojnarowski’s report, The Athletic’s Shams Charania added that the Celtics had already offered a package centered around All-Star guard Jaylen Brown, spicing things up on the Durant trade front.

“They don’t just want a star young player. They want all of your picks. They want more. They want a trade package that would be up there with the very deepest in terms of assets that we have seen in this modern era,” Wojnarowski said.

“That right now is why there is not a deal because teams are not bidding against themselves right now. Teams are not so far willing to just gut their rosters for Kevin Durant because obviously as much as they might want Durant, they want to believe they could still win a championship and it would have enough left after doing a trade to acquire him.”

It was reported that Durant was set to have a face-to-face meeting with Nets owner Joe Tsai, and the information that came out of that meeting sent shockwaves around the league.

“In a meeting with Nets owner Joe Tsai, Kevin Durant reiterated his trade request and informed Tsai that Tsai needs to choose between Durant or the pairing of general manager Sean Marks and coach Steve Nash,” The Athletic’s Shams Charania reported.

Along with the Celtics, the Heat and Raptors were said to “remain the most significant candidates to acquire Durant.”

A few hours after reports surfaced about the ultimatum Durant gave the Nets, team owner Joe Tsai — in a rare move — took to Twitter to back general manager Sean Marks and head coach Steve Nash.

Our front office and coaching staff have my support. We will make decisions in the best interest of the Brooklyn Nets.

After a few weeks without much news surrounding Durant, The Athletic’s Shams Charania reported that the Grizzlies were the most recent team to inquire about the superstar’s availability.

However, the deal was never likely to go anywhere because, despite having multiple first-round draft picks to offer, the Grizzlies would not include Jaren Jackson Jr. or Desmond Bane in a potential offer for Durant, according to Charania.

Charania added that along with the Celtics, Heat and Raptors, the 76ers, Bucks and Nuggets had also inquired about Durant since his trade request.

Nets, Kevin Durant agree to “move forward” with their partnership

And finally, it all came to an end.

On Tuesday, Aug. 23, the Nets announced that Durant will remain in Brooklyn.