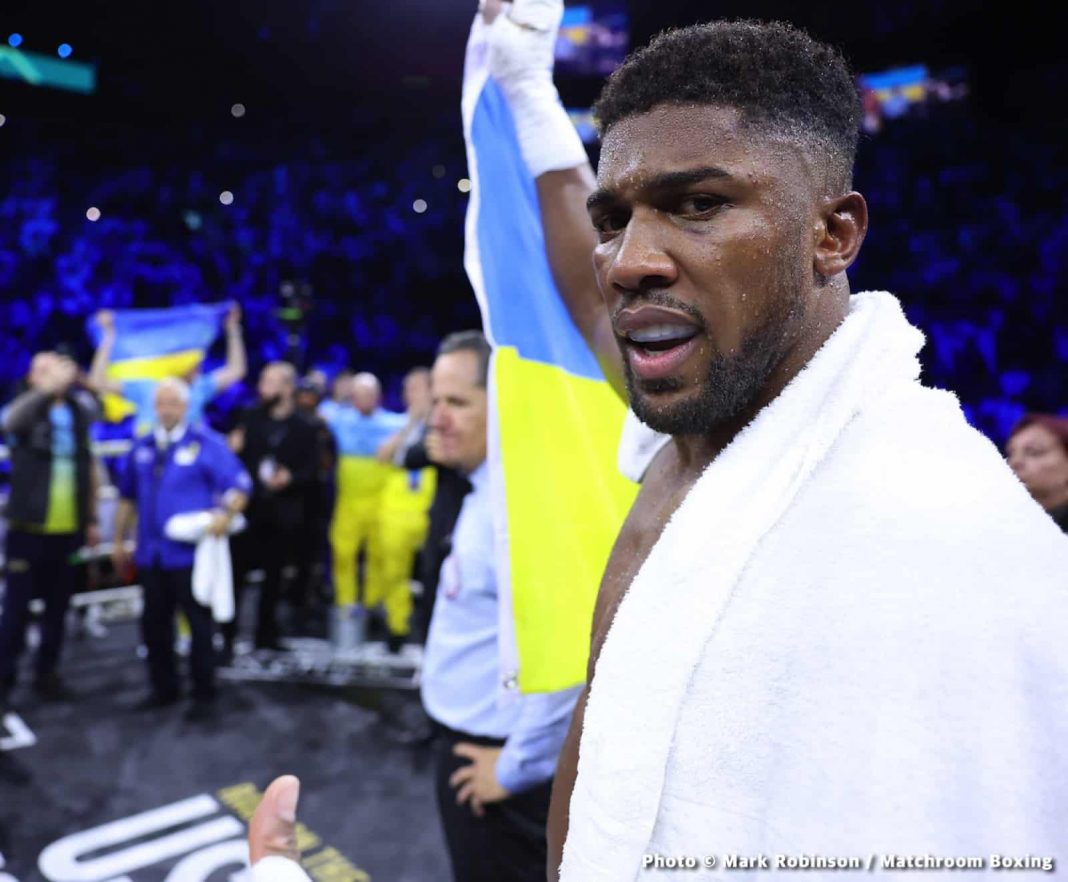 By Vince Dwriter: Eleven months after losing the WBA, WBO, and IBF heavyweight titles, Anthony Joshua finally received his opportunity to avenge his loss to the current champion Oleksandr Usyk in the “Rage on the Red Sea” at the Jeddah Superdome in Saudi Arabia. Joshua fought a better fight, but unfortunately for him, it wasn’t enough as he lost the rematch by way of a split decision.

AJ started the first round looking like a different fighter as he was moving his head and changing levels by bending his knees. For the first couple of rounds, Joshua used his jab and targeted Usyk’s body.

AJ was doing well until Usyk started landing the left hand. Usyk was dictating the tone of the fight as he didn’t give Joshua the opportunity to assert the bullying tactics, and he was also successful at keeping the boxing match in the center of the ring.

In the ninth round, Anthony Joshua finally imposed his will by bullying Usyk onto the ropes and connecting multiple shots to Usyk’s head and body. Joshua came out for the tenth round looking to take over the fight, but Usyk was able to bounce back by stinging Joshua with sharp combinations.

As the fight entered the championship rounds, Usyk consistently cracked Joshua with the left cross mixed with a flurry of combinations. When the final bell sounded, Usyk had a confident look on his face, and Joshua had a look of uncertainty. While the two fighters waited for the judge’s scorecards to be tallied, Joshua started to display some awkward behavior.

While Usyk’s corner man was taking his gloves off, Joshua walked to Usyk, gave him a hug, and offered to help with relief efforts for Usyk’s country, Ukraine. Joshua walked away for a brief moment, and when he noticed Usyk placing the Ukrainian flag on his shoulders, Joshua gave Usyk a hand signal. Usyk handed the corner of the flag to Joshua, and the two fighters hoisted the flag up in the air.

A few moments later, the scores were computed, and on one card, Anthony Joshua won by the score of 115-113, but that judge’s score was overruled by the other two judges that scored the bout 115-113 and 116-112, both in favor of Oleksandr Usyk.

After Usyk was declared the winner, Joshua became enraged. He picked up the WBA and ring magazine belts, held them up in the air, and threw them out of the ring. Then a frustrated Anthony Joshua exited the ring and was walking to the dressing room, but suddenly he decided to make a U-turn, and marched back to the ring.

Once he got back into the ring, he grabbed the microphone and delivered an uncut WWE-style promo.

“Usyk, one hell of a f***ing fighter, let’s give him a round of applause. That’s just emotion. If you knew my story, you would understand my passion. I ain’t no f***ing amateur boxer from five years old that was an elite prospect from a youth. I was going to jail. I got bail and started training my ass off because if I got sentenced, I wouldn’t be able to fight. The f***ing passion we put into this s**t man.”

Joshua went on to say: “This guy beat me tonight, maybe I could have done better, but it shows the levels of hard work he must have put in, so please give him a round of applause as our heavyweight champion of the world. Woo! Motherf****r!” Joshua stated. AJ ended his uncomfortable speech by leading the crowd with a “hip hop hooray! ” chant for Usyk.

Anthony Joshua desperately wanted to win this fight and regain the unified heavyweight championship, but unfortunately, he fell short, and as a result, he displayed a terrible case of poor sportsmanship. Once AJ calms down and gets his emotions in check, he needs to give Oleksandr Usyk a sincere public apology due to the fact that he ruined Usyk’s crowning moment.