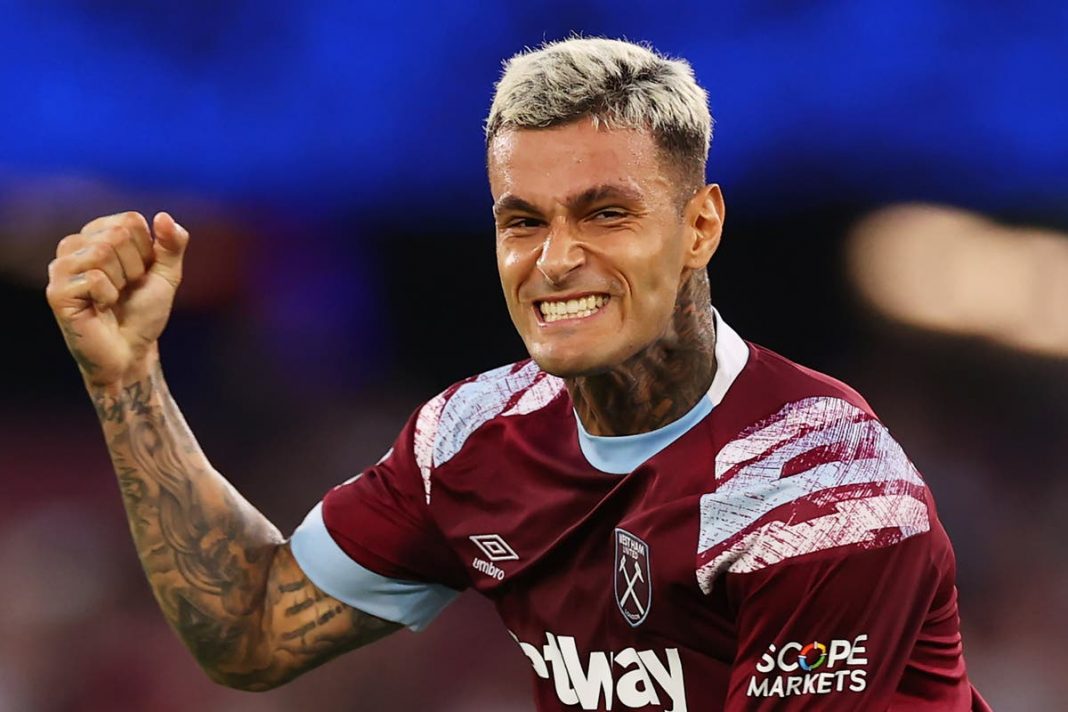 n the giant game of European football snakes and ladders, West Ham found themselves within touching distance of a memorable triumph last season, only to be sent sliding back to square one at the last.

Three months on from an agonising defeat in Frankfurt, and starting out on a different board, the Hammers are rolling again, halfway towards the group stages of the Europa Conference League after a 3-1 first-leg victory in their play-off tie against Viborg.

It was not the resounding, tie-ending, success some might of hoped for against a little-known outfit who only earned promotion to the Danish top-flight last year. But thanks to a first West Ham goal from Gianluca Scamacca, and strikes from more familiar scorers in Jarrod Bowen and Michail Antonio, the Hammers know only an implosion in Denmark will deny them another European adventure spanning the first-half of the season at least.

A teamsheet which advertised much in the way of intrigue and excitement delivered on its headline promise as new signings Maxwel Cornet and Scamacca, both making their first starts, combined to open the scoring.

Bowen’s strike shortly after the hour-mark put the Hammers in charge, and while they switched off to allow substitute Nils Mortimer to peg one back, sensational work from Said Benrahma teed up Antonio to re-establish a two-goal cushion ahead of next week’s return in Jutland.

Given the plethora of bizarre circumstances around what would have been a novel fixture in any case, it was perhaps unsurprising that things took a while to come to life.

The Hammers, for one, were missing three regular figures through suspensions for progressively more obscene offences: Aaron Cresswell for a straight red card in last season’s Europa League semi-final defeat to Eintracht Frankfurt, Declan Rice, who was caught on a tunnel camera suggesting the referee that brandished it had “probably been f****** paid”, and Moyes, for pinging a half-volley at a ballboy as his side crashed out.

Viborg had absences of their own, Nigerian winger Ibrahim Said and Gambia forward Alassana Jatta unable to obtain visas in time to travel, though the logistical complexities of passports, home offices and embassies could not hold a torch to those concocted by the footballing bureaucracy that have allowed Jacob Friis’ side to get even this far.

Viborg were in the bottom half of the Danish Superliga when it split in half, SPL style, after 22 games of last season, but then finished top of the relegation section to earn a play-off against fifth-placed Aalborg. They won that match on penalties to earn passage into the second qualifying round of the Conference League, and have since beaten teams from Lithuania and the Faroe Islands to get this far. Simple.

As for the London Stadium, well, with train strikes on and this unglamorous tie hardly demanding of an attendance in the midst of a cost of living crisis, it was not even half full.

Those who had made it got what they came for midway through the first-half as Cornet twisted and teased his man before lifting a floaty cross into the middle that was begging to be attacked. Scamacca, all six-foot-five of him, did not have to get off the ground to head home.

Bowen has endured a slow start to the season by the high standards against which he will now be judged, but his goal was reminiscent of his best moments last term, a positive turn and strike so precise it fell into that rare category of an effort from outside the box still worthy of being described as a “finish”.

The goal prompted a triple change, Angelo Ogbonna’s successful return to action for the first time since November ending on the hour-mark, as did Scamacca’s full debut and Bowen’s evening.

Thilo Kehrer was sent on for a debut, the day after signing from Paris Saint-Germain, but it was the introductions of Benrahma and Antonio alongside him that would prove vital as they combined to complete a 3-1 win Jacob Bonde nodded in Christian Sorensen’s cross.

West Ham are not quite there yet, and one need only whisper the name Astra Giurgiu to have Hammers fans nodding in acknowledgement that this a job that will still take a bit of finishing. But barring any major hiccup, Moyes’ men will be watching the group-stage draw with much more than a passing interest.