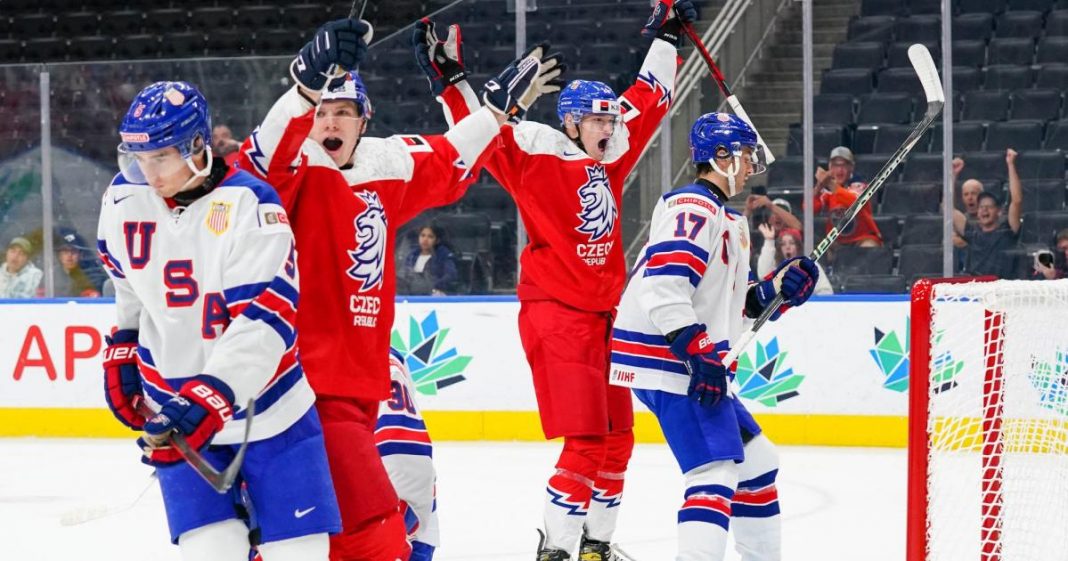 On Monday, Czechia was stunned by Latvia to close out group play in the World Junior Championship. It became the first team to lose to Latvia in the preliminary round. Two days later, Czechia upset the USA in the quarterfinals 4-2 to advance to the semifinals against Canada.

“I think we learned a lesson against Latvia,” Czechia captain Jan Mysak said after the win. “They wanted it more than us. Today we tried to do the same.”

The Czechs played a nearly flawless defensive game, limiting the Americans in the offensive zone and frustrating them with their physical play. The second period was the game-changer; Czechia held the USA to just four shots on goal while building a 3-1 lead.

Tomas Suchanek was strong in net for Czechia. He had to make a couple of big saves, but for the most part, Czechia’s defense made life easy for him. He was able to track and see shots clearly and his rebound control was solid. He did not allow the Americans secondary chances.

While Czechia advances to face Canada on Friday, the USA is left leaving Edmonton not only without a second consecutive gold medal, but also no medal at all.

The Sporting News has three main takeaways from the USA’s upset loss to Czechia:

Czechia shut down the USA’s forecheck

The USA’s strength at the tournament was its forecheck. The Americans used their speed to get the puck deep into their opponent’s zone, body off their defensemen from the puck and get control.

Czechia wasn’t letting that happen, starting in the neutral zone. While previous teams would sink back and allow the USA to fly through the middle of the ice and gain speed into the offensive zone, the Czechs were frustrating the play, stepping up and getting bodies on USA skaters. This made it difficult to not only gain that high velocity into the forecheck, but also to get the puck into the Czech zone.

Even when the USA did get the puck below Czechia’s goal line, the team wasn’t winning the 1-on-1 battles like it did in previous games. Czechia is a big team that plays the physical game as well as anyone. The USA got a taste of that, and it wasn’t able to adjust.

Czechia took care of the puck

You want to know Step 1 to beating a team like the USA? Don’t shoot yourself in the foot with turnovers and giveaways.

Czechia was responsible with the puck the entire game. It made smart plays in all three zones, never forcing a pass or shot when it wasn’t necessary. There were no risky stretch passes, no extra dekes at the blue line, no blind drop passes. The team was efficient in moving the puck and getting it out of the zone.

The USA’s first goal was a fluke. Goalie Tomas Suchanek’s pass from behind the net hit a stanchion and went right to Matt Coronato, who fired it on net. Logan Cooley completed the play by potting the rebound. The second goal came on the power play.

The prelims showed that if teams turned the puck over and gave the Americans extra chances, they were going to make those opponents pay by putting the puck up in the back of the net. Czechia did not do that, and it’s moving on to the semifinals as a result.

Luke Hughes was limited by a lower-body injury

What makes Hughes great is his skating ability. He can flat-out fly with the puck, and his skating helps out in the transition game.

So it was fairly easy to tell something was not right with him during the second and third periods against Czechia. Hughes appeared to hurt his knee on a fluke play, hitting it into a Czech player’s leg late in the first period. He left toward the end of the period but came back out for the second and played the rest of the game.

But it was clear he was laboring and not playing at 100 percent. Hughes wasn’t jumping up into the play as often. He wasn’t opening his hips and squaring up to defenders when they attacked him on the outside.

MORE: Why are the World Juniors being played in August?

Even in the third period, where he looked more comfortable, he still wasn’t his dynamic self. The USA had a five-minute power play in the third period, but it was clear that Hughes wasn’t risking walking the blue line and spinning away from opponents like he usually does. He simply was not the game-changing Luke Hughes who helped make the USA a dangerous team.

If there’s one positive for the USA being eliminated, it’s that Hughes won’t be playing any more on that hurt leg. We’ll see what the extent of the injury is in the coming days, but the hope is that it isn’t anything serious for the Devils prospect.