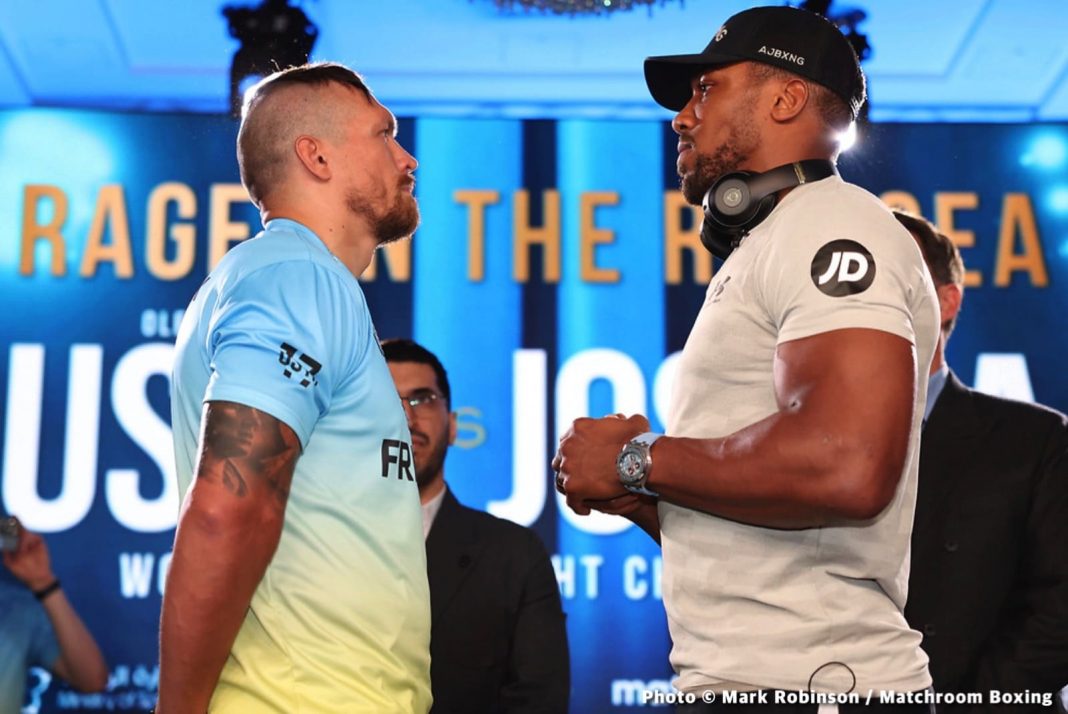 By Adam Baskin: Anthony Joshua regrets that he failed to fight with more aggression in his fight against Oleksandr Usyk last September in London.

Joshua (24-2, 22 KOs) firmly believes he lost the fight against Usyk (19-0, 13 KOs) when he made the decision to try and outbox him over 12 rounds instead of using his power game, which is what has gotten him this far in his career.

On Saturday, we’ll find out if Joshua’s theory about being aggressive is accurate when he faces Usyk in a rematch in Jeddah, Saudi Arabia.

“Yeah, for the wrong reasons because when I’m here, I took a loss,” said Anthony Joshua to Secondsout about whether it’s beginning to feel like home fighting in Saudi Arabia.

“God willing, we flip that and make it a positive. I’ve been here four and a half weeks now, so it’s feeling like a second home. I’m settled. I know everyone around my local area and all that stuff, so I’m cool, I’m pretty settled in.

“In sports, the standard is that high,” said Joshua when asked if he feels disrespected by the fans after his fights. “Through the past like champions in my sport, the same thing happens to them as well.

“What happens is you only retire when you don’t want to chase greatness and don’t want to challenge yourself anymore. So if you ask me where I’m at, I’m still chasing a goal. I’m saying I’ve got a goal set on Saturday night.

“I’m going to go beyond that as well, so I’m far from thinking it’s time to finish. But it’s entertainment, and as long as people want to watch, then I’ll always be willing to fight.

“I just like to be in the background sometimes. I’ve always been in the forefront of conversations as well, to a certain degree. Sometimes when I’m watching boxing and not fighting, my name is mentioned. I’m like, ‘I’m here to relax.’

“For him [Usyk], it’s good. He needs that fire, and I respect everyone in Ukraine. My heart goes out to them for real. That’s what would have won the fight.

“Aggression doesn’t mean swinging with windmills. It’s about competition. You’ve got to compete. If a man hits you, you’ve got to hit him back twice. It’s not about boxing. It’s just about competition, that’s all. That’s why I wish I had competed to a better standard,” said Joshua.