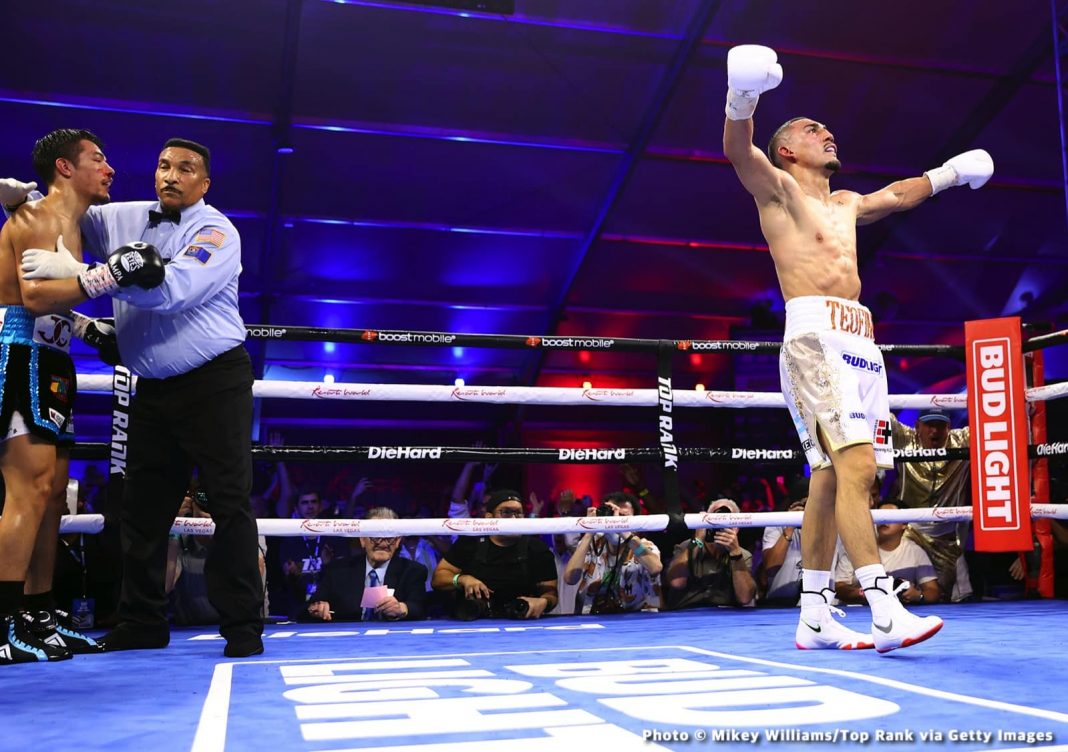 By Dan Ambrose: Former 135-lb champion Teofimo Lopez (17-1, 13 KOs) got back to his winning ways with a seventh round stoppage victory over Pedro Campa (34-2-1, 23 KOs) in a confidence-builder level fight at the Resorts Las Vegas.

Teofimo struggled in rounds five & six, getting outworked by his opponent Campa, and looking similar to how he had fallen apart against George Kambosos Jr.

In the seventh round, Teofimo dropped Campa with a right hand, followed by a jab that put him on his backside. To his credit, Campa got off the deck and fought well. However, after getting hit with three consecutive rabbit punches from Teofimo, Campa was pulled out of the fight by the referee Tony Weeks.

In hindsight, the referee should have stopped the action and warned Teofimo about the illegal punches to the back of the head, as he’d been using this punch since the early rounds of the fight.

“Hopefully, we fight in December, and it’s going to be an amazing show like tonight,” said Teofimo Lopez Sr to Fighthype. “Whoever has the belts, that’s what we want.

“If we have to fight for the vacant belts, we’ll take the vacant belts as well. After this performance, of course. That would be a great fight, and it would be for a lot of money. Why not? Let’s do it,” said Teofimo Sr when asked if he’d be interested in Teo fighting Ryan Garcia in December.

“He’s just getting started at 140. He was comfortable in there and he had fun. This guy [Campa] just comes to fight, so that’s why he had that style. Ryan is more like a boxer as well. They’ll match up good.

“I was screaming, ‘Entertain, entertain.’ That’s what I’ve told him since he was a little kid. You’ve got to entertain the crowd, and that’s when he started doing his thing.

“I’m just so glad. I even called the round. I said, ‘You got him in this round,’ and he did it. I knew what was wrong with him in that fight with [George Kambosos Jr]. In that fight, I knew it was the sickness that did that to him.

“That’s why he fought all frustrated in that fight. But we’re back at 140. He’s comfortable. I see us there for about a year and a half or two years and get all the belts,” said Teofimo Sr.