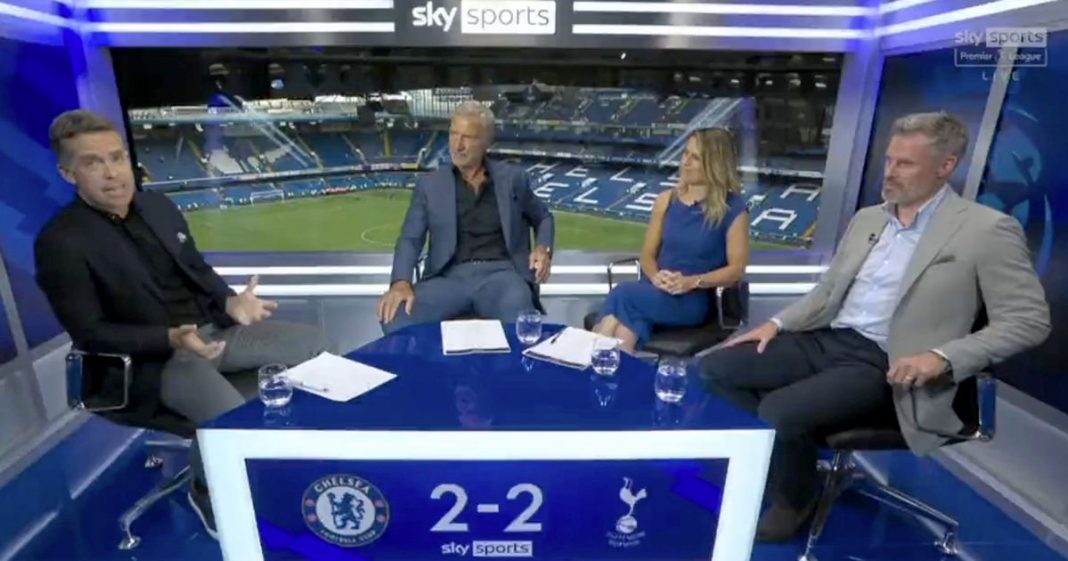 The cliche “a man’s game” is used to justify perceptions of physicality within football and to highlight that it is a contact sport. The implication is that men should be used to physical contact and women should not be, even if the comment may have been a throwaway remark by the experienced pundit.

The saying was used after Chelsea boss Thomas Tuchel clashed with Tottenham counterpart Antonio Conte on the sidelines during the fiery encounter at Stamford Bridge and after the game ended, with Spurs netting a last-minute equaliser to rescue a dramatic and controversial draw.

It was a game that was bad-tempered throughout, with Tuchel initially infuriated by the first Spurs goal being allowed to stand following a challenge from Rodrigo Bentancur. The home side were also left furious after visiting defender Cristian Romero faced no punishment for dragging his opponent Marc Cucurella to the ground by pulling his hair in an off-the-ball incident.

Discussing the game after the full-time whistle, Sky Sports pundit Jamie Carragher praised the intensity and quality of the Premier League on the verge of its 30th birthday, saying: “The anniversary is tomorrow and it never ceases to amaze you. Week in, week out and things that happens, that’s why it’s a huge success story, for games like that.”

Carney then added, speaking specifically of the end of the encounter at Stamford Bridge with Spurs scoring and then Conte’s clash with Tuchel on the sidelines: “You saw at the end when we don’t agree with the end, but Conte’s trying to bring that intimidating factor. They never gave up.”

That is when Souness chipped in, saying of both the managers: “Referees are letting a lot more go and it allows for a better watch. It’s a mans game all of a sudden now. I thoroughly enjoyed both games today.” The comment came just weeks after the England Lionesses won their first major international tournament, defeating Germany in a memorable Euro 2022 showpiece at Wembley.

Chelsea Women star and England Lionesses international Bethany England respond on Twitter : “’It’s a man’s game’. ‘Men at it’. Get in the [bin emoji] what a disgraceful thing to say after the summer this country has just seen.”