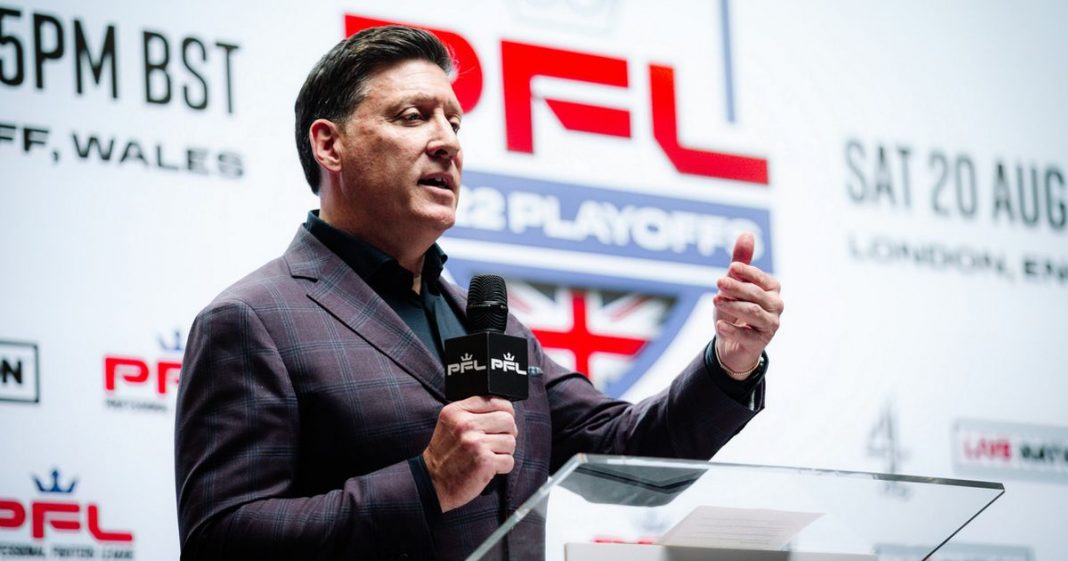 PFL boss Peter Murray has insisted the promotion’s decision to host events in Cardiff and London was a no-brainer because of the “passionate” UK fanbase.

The promotion host their semi-final playoff events in the UK starting at the Motorpoint Arena in Cardiff this weekend before visiting the Copper Box Arena in London on August 20. PFL have never hosted an event outside of the US before, previously holding their tournament finals in the likes of Las Vegas and Florida.

PFL have been on a mission to globally expand as a promotion and signed a deal to air fights on UK network Channel 4 earlier this year. They also recently announced the launch of a new European league that will see fighters from across the continent compete for the chance to earn a spot on the promotion’s main roster.

What are your thoughts on the PFL hosting their first two events in the UK? Let us know in the comments section below

Speaking with Mirror Fighting before their debut events in the UK, Murray said: “UK fans are passionate, Cardiff is a sports market and a fighting town. There is an increased amount of excitement and anticipation for more MMA in the market beyond boxing, alongside a top sport here in the UK there is a major role in MMA for fans. There’s a pent-up demand beyond fighters having limitations and we’re solving something for the fighters. exciting about the appearance.

“I’ve had the opportunity to attend many events here in the UK from football to boxing, there is passion, singing and a lot of beer drinking. We’re going to have that and then some in Cardiff and London, so we’re looking forward to turning UK fans onto the PFL.

The first contracts for PFL’s European league will be handed out to several fighters competing on the UK playoff events this and next weekend. Murray explained why he feels that PFL’s debut events in the UK is a groundbreaking moment for the promotion.

“Until you really execute outside of your home market, which for us is the US, you’re truly not international so it’s a really important moment for the PFL and we’re ready to launch our next playoff events in the UK,” Murray added. Not only on this card do we have the semi-final fights which are the main events. Also on the card contracts will be handed out for the very first PFL Europe qualifier fights. Every fight on this card has purpose, it’s win and get into PFL Europe and those who lose they will not make it into the league.”