Iyene Essien, the making of an emerging golf star | 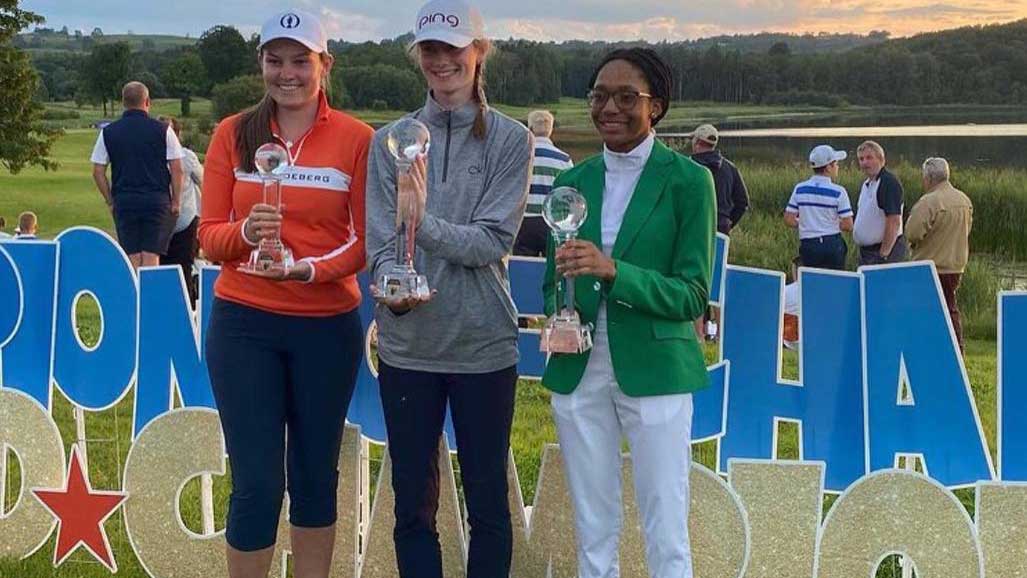 The lines are beginning to fall in pleasant places for Iyeneobong Essien. From the starry-eyed infant, who first took a tiny step into golf at the IBB Golf and Country Club, Abuja, a few years ago, Iyene, as she is simply known, is growing into a much sought after player, who never fails to do something noteworthy at every given opportunity.

A few weeks ago in Northern Ireland, the Akwa Ibom State-born daughter of a golf enthusiast gave her admirers reason to celebrate once again, when she finished as first runner up at the Champion of Champions Golf Championship Invitational.

The 16-year-old girl competed in the 16 to 19 years category at the invitational, playing on two challenging courses, the Faldo Course and the Castle Hume Course at the Lough Erne Resort in Enniskillen, Fermanagh, Northern Ireland.

The latest feat has once again shown that the teenager is right on the way to stardom; and she is doing it in a remarkable way.

Since winning her first medal aged five, Essien has added almost two dozen more medals to her coffers and has represented Nigeria 11 times at tournaments in Africa, Europe, and the United States.

But her performance at the Champion of Champions Championship Invitational in Enniskillen, Northern Ireland last month was so remarkable that it even got the attention of President Muhammadu Buhari, who ordinarily leaves sports matters to his aides.

In a congratulatory message to the U.S.-based budding star, Buhari commended the achievements of the youngster, who currently tops the junior player cadre in Nigeria.

The president noted that Essien’s achievement were as a result of hard work, dedication and perseverance, adding that the girl, who was the only teenager among 177 golfers at the 2019 Nigeria Ladies Golf Open Championship, where she was the 10th best player, has become a role model to other aspiring golfers.

Essien’s journey to stardom is not fortuitous. Although she took her first step into golf glory at the IBB Golf and Country Club when she was barely out of her diapers, Iyene has towed a well-planned path to growth, playing and learning from some of the best teachers of the game in Nigeria and overseas.

Born in New York, United States on May 17, 2006, she returned to Nigeria with her mother when she was still a toddler.

According to her father, Eyo Essien, a consultant economist, the golf prodigy was virtually raised by her mother when she was still a toddler. But she took her first steps into golf stardom when he returned to the country a couple of years later.

He said: “When I came back to Nigeria, I didn’t have anywhere to go to for recreation. I asked around and I was introduced to the IBB Golf Club.

“Iyene, who was five years old then, usually accompanied me there. One day, I noticed she was attracted to the way some white guys were playing golf at the club. So, I asked her if she wanted to play and she said ‘yes.’

“She wanted to take their club to play, so, I had to order for a kit for her. From there, she started her lessons at the IBB Golf Club.”

From the tender steps at the IBB Golf Club, Iyene soon became a known figure among members of the club and from there, she started participating in junior competitions.

Essien said: “After winning a junior championship at the IBB Club, I started taking her to junior competitions across Nigeria.

“Later, I took her to the United States, where she started training and participating in major youth championships.

“I applied for a school where they have golf as part of the curriculum. It is a normal school, where you will have all the sports. She applied for scholarship to combine her academics with sports. Since then, she has been representing her school and also playing for Nigeria.”

A serial winner of the yearly Awa Ibraheem Junior Championship hosted by Ikeja Golf Club, Essien started representing Nigeria when she was just 11 years old. Her first foray in international golf was at the Africa Junior Golf Championship.

Essien had to look for a more advanced coach for her daughter when it became clear that her game had advanced beyond what he and her local coach could handle.

He sent her to Johannesburg, South Africa, to work with a PGA-certified professional coach, John Dickson, to rid her of a slice and improve her putting.

She also outgrew the local competition, so, her parents started sending her each summer to tournaments abroad in Scotland, South Africa, Morocco and Botswana as well as the United States, where she played in North Carolina, Florida and California multiple times.

Essien explained that he had to send her to the United States because he knew that she would be in better hands there, especially, since she stood the chance of securing a scholarship that would give her opportunity to have an excellent education while playing golf.

According to Essien, Iyene applied to 13 private schools in the U.S., including Taft, which eventually took her.
Since going to the United states, Iyene has continued to grow in the sport that she is almost always one of the first names in the roster when the Nigerian Golf Federation (NGF) is selecting players for competitions.

Essien was recently selected as one of the best under-16 junior players to represent Nigeria at R&A Junior Golf Championship in Monifieth, Scotland, from July 11 to 13, 2022.

Before then, she was selected to represent Nigeria at the Summer Youth Olympics, which was scheduled to hold in Dakar, Senegal, in summer 2022 but now postponed to the summer of 2026.

“The contract I have with Iyene is that she will only turn professional if she wants. I don’t want to push her into a profession she is not comfortable in.

“With a degree, I know that she could fall back on her certificate if golf doesn’t work for her.” While her father is trying to guide Essien to a successful golf career, some members of the Nigeria Golf Federation believe that the golf prodigy, like many others with special talents, will grow faster if government and institutions pay attention to her development.

An official of the federation, who pleaded anonymity, told The Guardian that it would be helpful if Akwa Ibom State government, her state of origin, supports her quest for excellence. She said: “We have approached Governor Udom Emmanuel to help Essien, but he did not respond.

“This is what Delta State does for her indigenes. Akwa Ibom can key into the adopt-a-talent programme, which paid off for Nigeria at the last Commonwealth Games.”