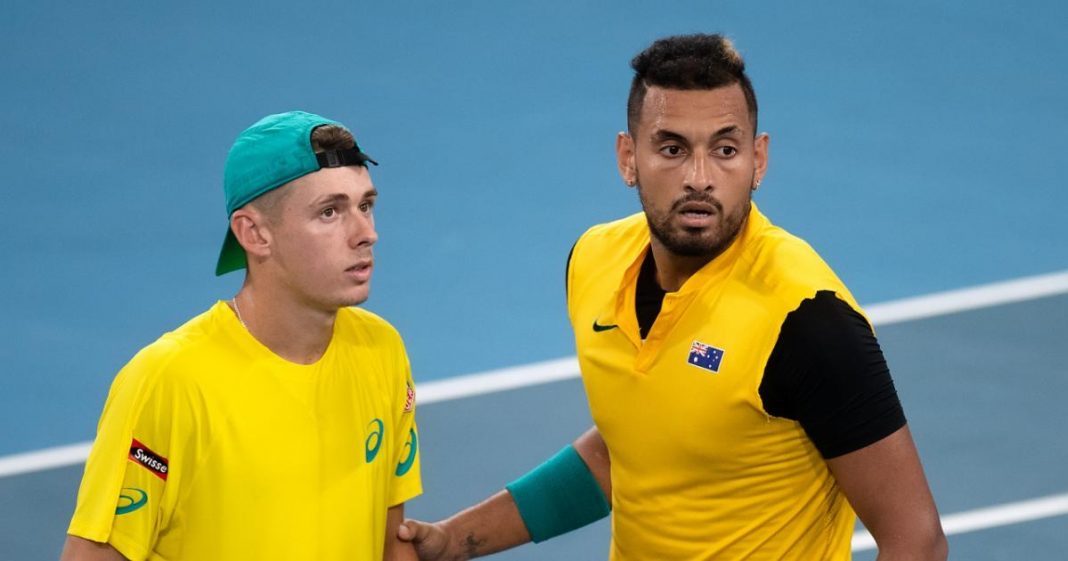 Australia’s current two best male tennis players Nick Kyrgios and Alex de Minaur will finally play each other for the first time at the Canadian Open on Thursday (local time).

While they’re both Aussies and capable of beating anyone at the top of their game, that’s pretty much where the similarities between the two players end.

Kyrgios is a fiery player on and off the court, capable of mind-blowing shots but also allowing his temper to get the best of him.

De Minaur, on the other hand, rarely loses his cool, keeps his shots simple and makes up for a lack of overwhelming power with sheer hard work.

Their career trajectories have also been quite different with Kyrgios’ rollercoaster ranking seeing him reach as high as 13 in 2016 and as low as 137 earlier this year. De Minaur has been a much steadier climber, reaching 15 in 2021 and not falling out of the top 50 since August 2018.

There’s a near four-year age gap between the two too with De Minaur only just hitting his prime now at 23 and Kyrgios looking to make up for lost time at 27.

Neither are yet to win a Grand Slam tournament despite their undoubted potential and are finding form at the right time before the US Open begins in late August.

De Minaur won his first ATP title in over a year at the Atlanta Open earlier this month, while Kyrgios ended his three-year singles title drought with victory at the Citi Open.

While De Minaur has been consistent for the past few years, Kyrgios has generally been a wildcard but has stumbled upon some much-needed stability in 2022.

Early success at the Australian Open in men’s doubles with Thanasi Kokkinakis has seemingly brought out a new side in the 27-year-old, who has won two further titles in doubles since.

Kyrgios and De Minaur looked set to do battle in Wimbledon earlier this year but Cristian Garin came from two sets down to beat De Minaur in the round of 16.

Kyrgios had no such trouble against the Chilean before ultimately coming up short in the final against Novak Djokovic.

While Kyrgios and De Minaur haven’t played against each other to date, they have previously played together at the ATP Cup in early 2020.

The unlikely doubles pairing came from a set down to beat Great Britain’s Jamie Murray and Joe Salisbury 3-6 6-3 18-16 in a decisive match that saw the two Aussies celebrate wildly.

Speaking after their win together, De Minaur heaped praise on Kyrgios as he acknowledged the differences between them but stressed they could bring out the best of each other.

“We’ve always had a great relationship. Nick’s always done everything in his power to help me out and I’m always grateful for that,” De Minaur said at the time.

“As everyone knows, we are not the same person. We’re actually quite different but we complement each other very well.

“When it comes to team environments, there is no one out there you’d rather have than Nick.

“He’s always going to have your back at all stages and he’ll do anything for you. It’s the sort of stuff you don’t see because it’s all behind closed doors and in the shadows. You almost wish we could have a camera in the locker room, in the team room, in the bus rides and you’d see how he gets everyone involved.”

De Minaur subsequently had to pull out of the Australian Open in 2020 after their ATP Cup success with Kyrgios dedicating his first round win at the tournament to him.

“If he’s watching this, that was for you little fella.”@NickKyrgios dedicates his first round win to countryman @alexdeminaur who is unfortunately missing #AO2020 due to an abdominal injury#AusOpen | 👑 x 👿 pic.twitter.com/MsiGdkanQ9

While they may be friends off the court, the two can’t be much different on it and Australia will finally get to see which style comes out on top at the Canadian Open.

Will Kyrgios prove he really can be king? Or will De Minaur show the power of dogged determination?

It’s the match Australia has been waiting for and the result could well dictate which of these players can be a serious US Open contender this year.