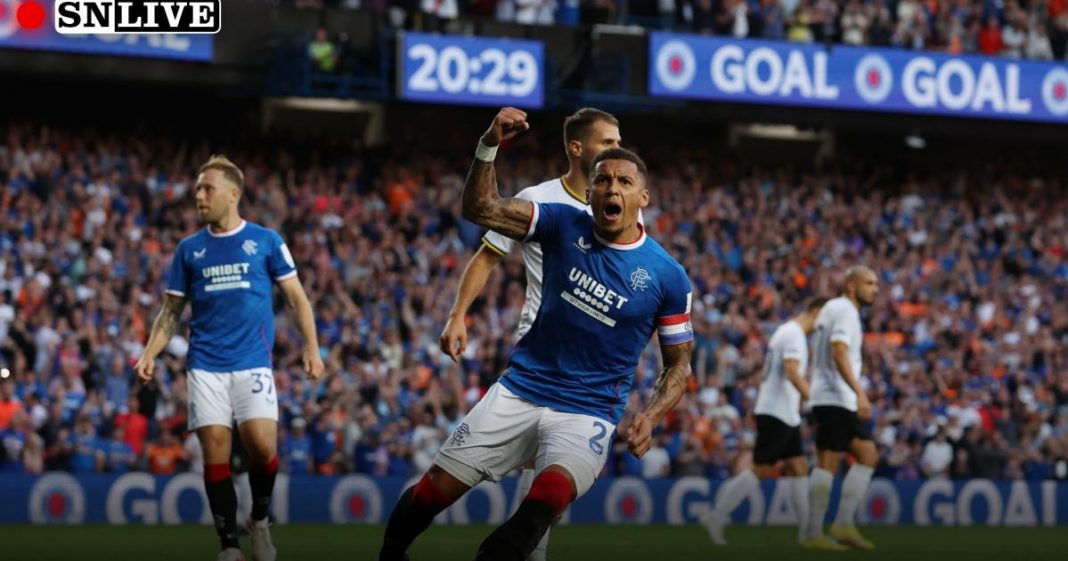 Rangers host Union Saint-Gilloise at Ibrox on Tuesday night with Giovanni van Bronckhorst’s tasked with overturning a 2-0 deficit from the first leg of the Champions League third qualifying round tie.

Last season’s Europa League finalists were well below their best in last week’s first-leg defeat in Belgium with van Bronckhorst even admitting Rangers were “lucky” to only conceded two goals.

Ibrox was something of a fortress for Rangers in European competition last season and the Scottish side will need the backing of their fans to get back into the Champions League third qualifying round. Rangers must perform at a much higher level in the second leg.

Alfredo Morelos and Ryan Kent could return to the Rangers lineup after missing the first leg through injury with the former coming off the bench to score in the Scottish Premiership win over Kilmarnock at the weekend.

An incredible night of European action at Ibrox as Rangers completing turn the tide to reach the Champions League play offs.

Tavernier’s first half spot kick forced them back into the contest before Colak and Tillman eventually wore down their Belgian visitors in Glasgow.

PSV Eindhoven or AS Monaco await in the next round!!

90th +2 Mins: Barisic picks up a silly booking as the Rangers fans now look a little nervous as the clock ticks down.

90th Min: Morelos breaks in behind but Moris is quick off his line to thwart him……FIVE MINUTES ADDED ON!!

85th Min: Extra time in Eindhoven between PSV and AS Monaco as Ibrox kicks off their play off party…….

Morelos tests Moris from distance and Glen Kamara comes on for Lawrence.

82nd Min: Sensible stuff from van Bronckhorst as Alfredo Morelos and Ben Davies come on for goal scorer Colak and the cautioned Sands.

WHAT A TURNAROUND FOR RANGERS!!!

Barisic floats one into the box and Malik Tillman gambles to head home his first Rangers goal!!!

74th Min: Another goal in the Netherlands as Eric Gutierrez levels for PSV, 2-2 on the night, 3-3 on aggregate…..extra time INCOMING!!

Things are getting tense here in Glasgow as Lawrence and Amani both go into the book.

70th Min: A let of for Sands as he appears to receive a second booking…….but the referee agrees on a warning after a quick chat with his assistant.

62nd Min: That goal has completely shifted the momentum for Rangers as John Lundstrum fierce strike is tipped around the post superbly by Moris

Moris could only parry away Scott Arfield’s drive inside the six-yard box but Colak stays alive to nod home a HUGE goal for Rangers!!!

GOAL! GOAL! We are level at Ibrox!

55 Mins: Very little to report from Ibrox since the restart but Wissam Ben Yedder has doubled AS Monaco’s lead on the night (3-2 on aggregate).

50 Mins: No changes for either side at the break as Jean Lazare Amani lashes one over the top for Union.

Key goal in the Netherlands as AS Monaco are level at 1-1 at PSV Eindhoven (2-2 on aggregate) with 30 minutes of normal time remaining.

Can Rangers turn this around around or will Union secure a first ever Champions League play off spot?

The second-half is underway at Ibrox.

📲 Follow the second-half live in our Match Hub: https://t.co/qvE9KDfisF pic.twitter.com/1EjPiQXDcf

A change in the team talks at half time as Tavernier’s spot kick puts Rangers right back into the contest!!!

Rangers still have work to do to revive their Champions League dream and Union will look to dig in for the next 45 minutes as they push for history.

Out of nowhere Rangers have the advantage!!!!!

Boris Barisic’s cross into the box struck Van Der Heyden on the hand and Tavernier calmly sticks away the penalty!!!

40 Mins: Rangers are bossing possession but Union still pose a threat on the break as James Sands is booked for a cynical foul.

Union’s Ryan Sykes then joins him in the book for a late challenge.

35 Mins: Tom Lawrence lines up a spectacular effort from distance but Moris watches it wide of the upright.

A huge chance for Rangers as Colak slips away from his marker from Tavernier’s free kick but Anthony Moris springs into action to claw away his header.

28′ A brilliant save from Moris as Colak looked certain to score with a powerful header.

24 Mins: A chance for Union from a second corner as Siebe Van Der Heyden flashes a header wide but skipper Teddy Teuma is down injured and needs treatment.

21 Mins: Union’s first break upfield results in a corner but Rangers easily deal with the threat. However, there is no way through a drilled away defence so far with 11 players behind the ball for the Belgians.

15 Mins: Update from the Phillips Stadion……PSV Eindhoven lead 1-0 on the night, and 2-1 on aggregate, over AS Monaco.

Rangers or Union will face the winners of that game in the Champions League play offs.

12 Mins: Early pressure and half chances for the hosts as they know a first half goal could be crucial in this tie. Free kick into the box is headed just over the top by Antonio Colak!!

9′ Colak sends a header inches over the bar from a Tavernier delivery.

A positive start at Ibrox.

5 Mins: A slow start here in Glasgow with some nervy early touches from the home side.

KICK OFF: WE ARE UNDERWAY ON A HUGE NIGHT AT IBROX!!

⏰ KICK-OFF: We are underway at Ibrox.

20 Mins to KO: Union Saint-Gilloise are gearing up for what could be a historic night for the visitors in Glasgow.

45 Mins to KO: A huge night in store for Rangers as they aim to keep alive their Champions League hopes for 2022/23.

The Glasgow giants last reached the Champions League group stages in 2010, however, they have lost at this stage twice before since then, against Malmo in 2011 and 2021.

Three starting changes for Rangers from the first leg with Tom Lawrence, Scott Arfield and Ryan Kent all come in for the home side with Rabbi Matondo, Ryan Jack and Glen Kamara all dropping to the bench.

90 mins from KO: Good evening and welcome to The Sporting News’ live coverage of the Champions League third qualifying round second leg between Rangers and Union Saint-Gilloise.

Last season’s Europa League finalists have a tough task on their hands this evening – they must overturn a 2-0 deficit from last week’s first leg in Belgium to progress to the playoff round. Can the Ibrox crowd help Rangers mount a comeback as van Bronckhorst sends a message to the home fans ahead of KO in Glasgow?

Read a full match preview from the boss 👇

Morelos and Kent could return to the Rangers team after missing last week’s Champions League third qualifying round first leg against Union Saint-Gilloise. This would give the Scottish team a significant boost and strengthen their attacking line when they need goals to get back into the tie.

“Ryan did some parts of the training today [Monday],” said van Bronckhorst. “We have to assess tomorrow if he’s fit enough to start.” Fashion Sakala is also back in the Rangers squad.

Union Saint-Gilloise head coach Karel Geraerts made several changes for the league game against Mechelen at the weekend. Geraerts was unhappy with his team’s performance as they lost 3-0, but his key performers should be well-rested.

New signing Oussama El Azzouzi could feature for the Belgian side, but Victor Boniface was registered too late to play against Rangers at Ibrox on Tuesday night.