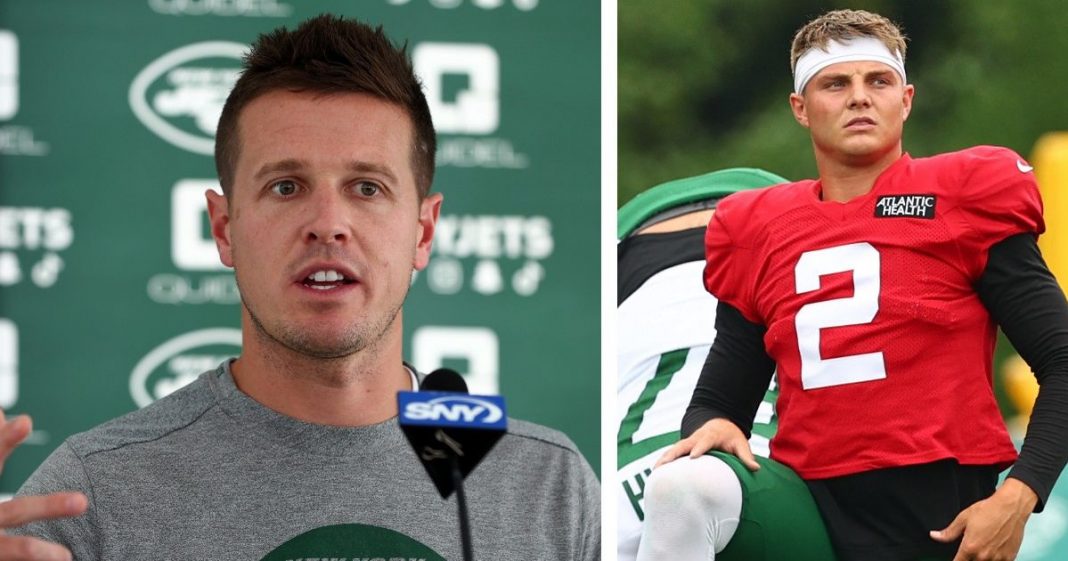 Hope hasn’t been easy to find on the green side of New York in recent years.

The Jets have endured a miserable decade, recording just one winning season since 2010 and hitting rock bottom as they went 2-14 in 2020.

But, whisper it quietly, there is some cautious optimism entering the 2022 season. The main reason for that is a young, exciting offence bolstered with even more talent entering Zach Wilson’s second season.

At the helm is Mike LaFleur, a young offensive co-ordinator brought in by Robert Salah. LaFleur has worked closely with Kyle Shanahan and Mike McDaniel whilst his brother, Matt LaFleur is Green Bay Packers head coach.

Now, however, he has chance to carve out his own identity as an offensive mastermind having been given a “blank slate” with the Jets in rebuild mode.

Have your say! How many games will the New York Jets win this season? Join the discussion in the comments section!

“It’s cool because, like you said, it is a blank slate,” he tells British media on a call ahead of the start of Jets training camp. “It’s different than anything I’ve been a part of in any building, you know.

“We got to to Cleveland in 2014 and it was more of an established, veteran group. 2015, getting to Atlanta with Matt Ryan and Julio (Jones), I mean they had been there, done that. 2017 we brought we bring in Hoyer, there was just more vets on that offence with Pierre Garcon and all that, but it was more of a rebuild-type deal.

“But then you get here and it was as young as I’ve ever been around. And like you said, I think the word is correct, it’s a blank slate and that’s what’s exciting about it because you get to do it together.

“That’s what’s so cool about this sport, is not one player can just absolutely take over a game and that’s the thing.

“You’re working together as coaches and players, trying to get this thing to be our offence and our identity, so it’s been fun. It’ll be fun to watch these guys grow throughout training camp going into year two.”

Whilst the nature of the NFL means no single player can win a game alone, the quarterback position remains crucial.

And at the heart of LaFleur’s vision is second-year starter Zach Wilson, looking to build on flashes of his significant potential during his rookie campaign.

Holding the second overall pick in the 2021 Draft, Wilson quickly established himself as the Jets’ top choice. He missed a stint last season with injury but returned to piece together a strong run and give high hopes for year two.

LaFleur explains: “After after the injury and just being able to sit back for those four weeks, I think I’ve said said it numerous times, just for him to be able to just take a breath (was important).

“All rookies, you play that that that last season in college football then you go straight to training and you’ve got the Combine, you’ve got your pro day and then you got all your visits and then boom, it’s rookie minicamp, then you don’t get as much time in the summer as everyone.

“There’s just so much to being a rookie and oh, by the way, you’re the you’re the starting quarterback. You’re one of 32 in this league. So there just was a lot on his plate, obviously.

“To be able to sit back in those last of those four weeks in the middle of the season, watch some veterans do some things and like I said, take a deep breath, I think that was so big for him.

“I think he just came back just a calmer, more in charge quarterback. And you can see that there were games that were better than others, but there was growth amongst those games, especially the totality of it.

“Now going into year two, the really cool part about training camp is it’s not his first training camp. He knows the speed of this league. He knows what defences are doing. It’s really just honing in on what he needs to get done within this offence, both fundamentally and schematically.

“We’re excited about it, he made strides in OTAs, and this six weeks (in training camp) will be big for him.”

The Jets drafted another wide receiver, Garrett Wilson, in the first round this year
(
David Becker/Getty Images)

It’s not just Wilson, but those around him that are generating excitement. Rookie wide receiver Elijah Moore shone last season and is now joined by Garrett Wilson, an Ohio State standout picked 10th overall in the latest draft.

Running back Michael Carter, a fourth round draft pick out of North Carolina, impressed as a rookie last year.

“We couldn’t believe he was sitting there in the fourth round,” LaFleur admits. This time around, lightening struck twice and they snapped up Iowa State’s Breece Hall in the second round to form a one-two punch in the running game.

“I thought there was no way Breece would be there, especially a couple of days and weeks before the Draft started,” LaFleur says. “To be able to get those guys when we did.

“Two special football players that produced at a high level in college, but also very, very good human beings that come to work every day.

“Very impressed at their age with what they bring on a day to day basis and how they understand what needs to get done from a work standpoint at a professional level.

“It will be fun to use those guys,” he adds.

Despite all eyes on their young talent, LaFleur recognises the need for experience. That’s why they spent big on Corey Davis as a free agent last off-season and added Laken Tomlinson and CJ Uzomah this time around.

“There’s nothing like experience, not just in the NFL, but in any walk of life, in my opinion,” LaFleur says. “You know, I thought it was a pretty good coach in 2013 when I was coaching in college, and then you get to the league and you realise you really don’t know anything.

“Then you just learn as you go and the experiences that you learn from throughout those years. And it’s the same for these players, you know.

“The college game is so different than the NFL game. So the more that you just play, whether it be in practice or on Sundays, just stacking those games in those years is critical.

Any optimism and excitement surrounding the Jets will be kept under wraps, after all fans have become all too familiar with disappointment in recent years. For LaFleur and his players, the focus is simply on the next few weeks of training camp which will prove vital to their success.

“This is the foundation,” he declares. “We have basically eight days of install (at the start of training camp) and our offence will be 98% in during those eight days.

“So the first two blocks and 10 days, the guys will have everything and it’s going to be a lot, but then you have the next few weeks to continue to build on that foundation and improve.

“When you look at the end of the year in February, let’s say, and you’re starting to watch cut ups. Yeah, we spend a lot of time in the league and even in college football on game planning and coming up with different stuff, and people don’t understand why we’re in here (team facility) so late.

“But it’s just the time gets away from you, and next thing you know, you’re trying to figure out what what you believe is the best thing for your players to make them successful on Sunday.

“But then when you look at it in February in the totality, it still goes back to your foundation, those first eight days of training camp, and you just hope you bank enough reps throughout training camp that when it gets into the season, that stuff they’re so used to it that they can go back to those experiences that they had in training camp.”