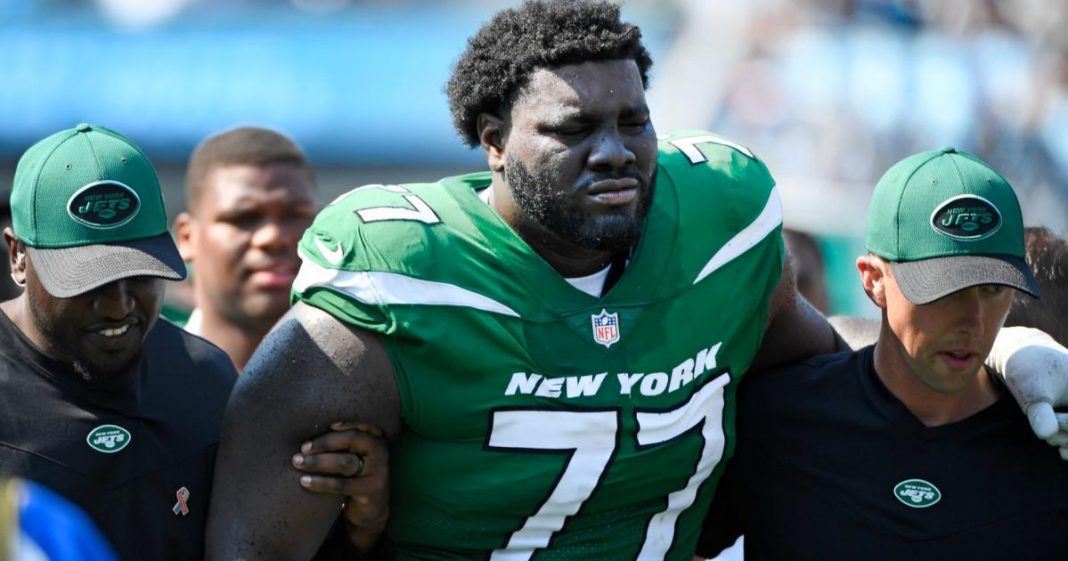 The New York Jets are entering 2022 with some lofty expectations. Despite going 4-13 last season, Zach Wilson entering his sophomore year with a new No. 1 receiver in Elijah Moore and a highly-touted rookie running back in Breece Hall has optimism brewing in the Big Apple.

That optimism might take a hit, however, depending on the MRI for 2020 first round pick Mekhi Becton on Tuesday. Becton, who missed nearly all of last season after undergoing surgery on his right knee, which he sustained during Week 1 against the Panthers, left training camp on the second play of practice on Monday.

Now, his 2022 season is reportedly in jeopardy.

After head coach Robert Saleh said Becton’s knee was “stable,” the injury is reportedly “more concerning” than initially thought, per Mike Garafolo of the NFL Network.

According to Connor Hughes, there is “legitimate fear” Becton could be sidelined for the season.

The injury would leave a hole at right tackle for the Jets, who have pursued Pro Bowl tackle Duane Brown. Signing Brown would become an emergency need if tests Tuesday reveal more significant damage to Becton’s knee.

Regardless, if Becton misses time in training camp, it is significant. He is currently converting to right tackle from left tackle, and the Jets have expressed concern about his conditioning in the past.

Next man up for the Jets would (technically) be Conor McDermott if they decide to stay in-house. McDermott started last season on injured reserve, but he did close out the year before being re-signed in March.

What’s next for the Jets?

Regarding that aforementioned optimism, the Jets are rolling out a new-look in 2022.

Between Hall and Moore on offense along with Jermaine Johnson and Ahmad Gardner on defense, New York feels optimistic it and Wilson can turn a corner this year.

While there will undoubtedly be some growing pains, the intensity is up this year.

MORE: Why Jets’ Zach Wilson is deleting social media ahead of training camp

In fact, Saleh has stopped practice when the team’s intensity isn’t where it should be.

“It was just a reminder of why we’re doing what we’re doing and the expectation of how we come out of the locker room, how a lot of games are lost just by coming out of the locker room with that slight lull,” Saleh said, per The Athletic. “I thought the guys did a great job responding. I thought [Wednesday’s] practice was really good except for that one-minute lapse.”

Wilson has also been impressive with his throws in training camp, although that should always be taken with a grain of salt.

Losing Becton, an already-named starter, would undoubtedly affect the Jets’ plans, but it doesn’t have to be devastating. He had to earn his starting role over George Fant at left tackle last year. Even though Saleh endorsed him this year, McDermott, Brown, or whoever the Jets pick up at right tackle this year should be up to the task.