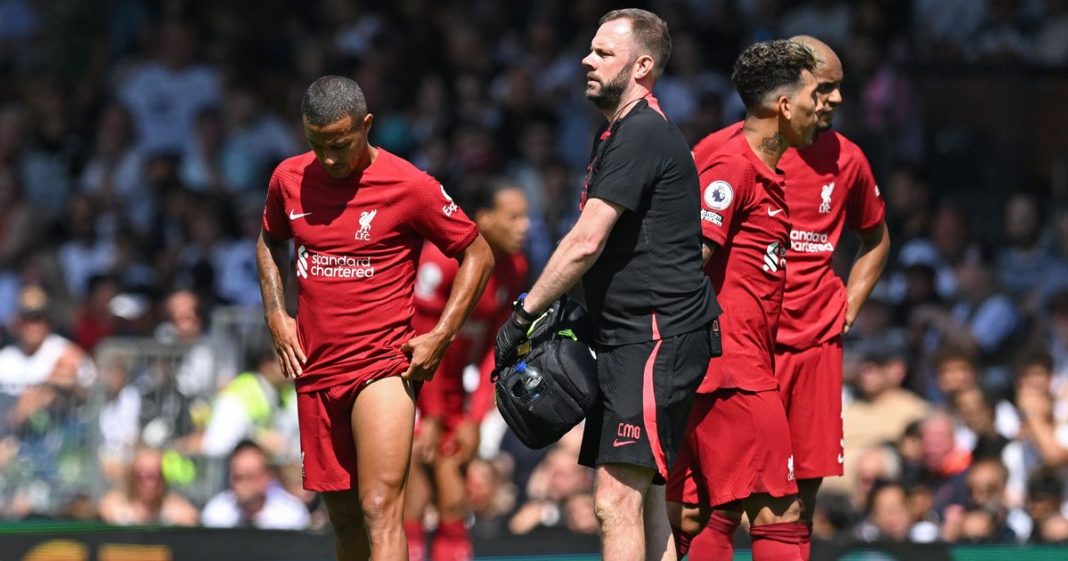 Liverpool’s opening game of the Premier League season did not go to plan for Jurgen Klopp, who left Craven Cottage annoyed by what he’d seen against Fulham.

The Reds departed London with a solitary point from their game against the newly-promoted side and were glad to avoid defeat in a 2-2 draw after facing an inspired Aleksandar Mitrovic. The draw means Liverpool are already playing catch up in what’s expected to be another title tussle with Manchester City, who put in a controlled performance to brush aside West Ham 2-0.

To make matters worse, Saturday’s draw also came with another sting in the tail in the form of an injury to Thiago Alcantara. Klopp started the game with Thiago, Fabinho and Jordan Henderson – his well-established favourite midfield three – only for the Spain international to go down in the 51st minute with a hamstring injury, which is expected to keep him out around six weeks.

Discussing the injury in his post-match press conference, Klopp bristled at the suggestion that Thiago’s misfortune could prompt Liverpool to dip into the transfer market for a new midfielder.

“I know what will now come up, it’s clear,” he began. “We said we don’t need a midfielder because we have enough – and we actually have enough, but the problem now is we get punished for something that is not our responsibility really because things like this can happen.”

He went on to list the various other injuries his midfield group are currently burdened with after Thiago joined Curtis Jones, Naby Keita and Alex Oxlade-Chamberlain on the sidelines.

“Nobody could imagine that Curtis gets the thing he gets; it is nothing serious but he is a young boy and it is a kind of stress reaction,” he said. “Bodies are like this. Naby is only ill and he will now be back definitely next week again. Oxlade happened early and now with Thiago that is, of course, not good and we will see.

“Look, a transfer must make sense now and in the long term; we have midfielders, we have still enough midfielders.

“It is not that we lack midfielders, but it’s just some of them are injured. This is not a good situation, I don’t like it at all, but we have to see how we react on that – but for sure not panicking.”

As Klopp said, Keita will be back in contention for Monday’s fixture against Crystal Palace, but the German’s change on Saturday offers a hit at his future plans. Harvey Elliott was the player given the chance to play in midfield as Liverpool tried to reverse a 1-0 deficit and the 19-year-old perhaps should be given further opportunities to flourish in that area.

HAVE YOUR SAY! What midfield should Jurgen Klopp start against Crystal Palace on Monday? Comment below.

Alongside Jones and new arrival Fabio Carvalho, Elliott carries the hopes of Liverpool’s future in the middle of the park. With James Milner now 36 and Henderson (32) and Thiago (31) both the wrong side of the 30, Klopp needs to have one eye fixed firmly on his side’s evolution.

While that might well involve a big-money transfer for Borussia Dortmund’s Jude Bellingham next summer, it currently means giving Elliott, Jones and Carvalho the opportunity to shine on the biggest stage.

The early signs are positive: Klopp has often spoken of his love for Elliott, the left-footed schemer capable of unlocking defences with a clever pass, while Carvalho was given the final 15 minutes to make an impression against his former club, could have scored with his first touch and has shown no little X-factor during pre-season.

Thiago’s injury is extremely bad timing and any absence is of course a blow. But for Klopp there is certainly a silver lining to be found in the cloud that his bad luck has created.