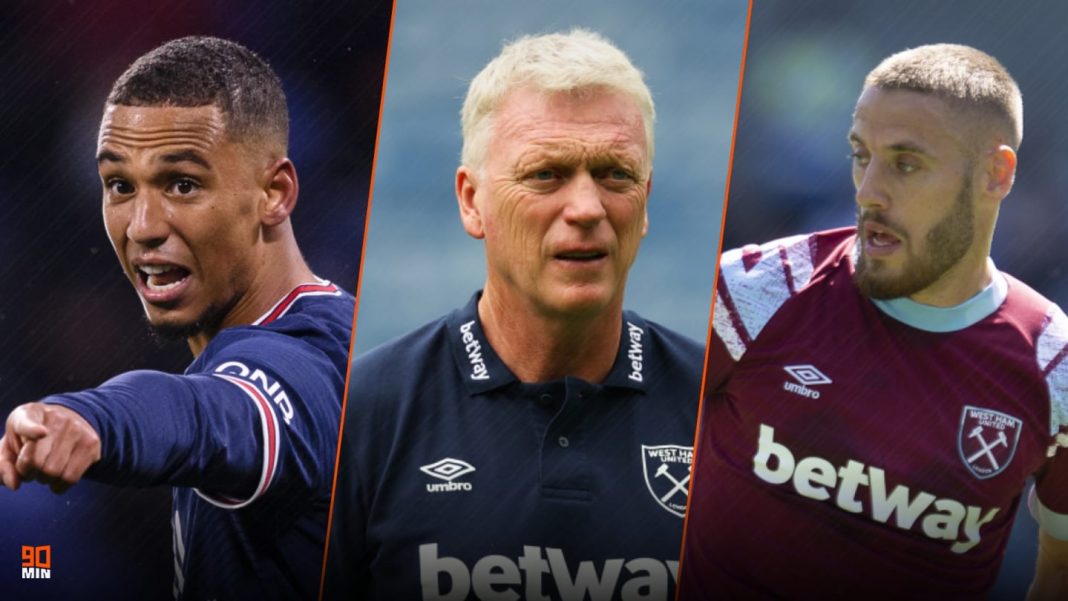 West Ham’s search for additional reinforcements shows no sign of letting up, with manager David Moyes looking to sanction a number of incomings as well as outgoings before the summer transfer window slams shut.

The Hammers kicked off their 2022/23 Premier League campaign with a 2-0 defeat to champions Manchester City at London Stadium, but the absence of key personnel on Sunday was the main takeaway from the game – from a West Ham perspective at least – rather than the result itself.

Moyes was without summer signing Nayef Aguerd and Craig Dawson through injury, and with Angelo Ogbonna not fit after a long-term knee injury and Issa Diop not in the right frame of mind to play, Ben Johnson was forced to fill in alongside Kurt Zouma in central defence – who himself didn’t look to be 100% fit.

Signing a new centre-back has become a key priority for Moyes as a result, particularly as a move to Premier League new boys Fulham is all but completed for Diop.

There’s also an imminent outgoing in attacking midfield, but Moyes, head of recruitment Rob Newman and the West Ham hierarchy are hopeful of bringing in at least three new faces before the deadline.

90min understands that West Ham have made an offer for Paris Saint-Germain centre-back Thilo Kehrer.

The 25-year-old Germany international is one of a number of players under consideration and offers crucial experience of playing at the highest level. He has featured prominently for PSG in the Champions League, while he’s got used to playing in a winnings side after lifting the Ligue 1 title in three of his four seasons at the Parc des Princes.

Kehrer is also capable of playing at right-back, which prove useful if Moyes opts to switch systems, and has just one year remaining on his contract in the French capital.

The Frenchman, who joined Bayern from PSG two years ago, has two years remaining on his contract in Munich but faces stiff competition for a first team place from the likes of Matthijs de Ligt, Dayot Upamecano and Lucas Hernandez. Benjamin Pavard, who shot to fame as a right-back for France at the 2018 World Cup, is also comfortable playing in that position.

Nianzou has played just 23 times in the Bundesliga since joining Bayern, having spent time on the treatment table, and could be a player West Ham move for if they’re unable to land Kehrer from PSG.

Fenerbahce’s Attila Szalai and Manchester United’s Eric Bailly are two of a number of other players who have been linked with moves to London Stadium.

One player heading out of the door at West Ham is Issa Diop, who, despite the crisis Moyes is facing in central defence, is being allowed to join Fulham.

90min understands that a £15m fee has been agreed for the 25-year-old, with a deal expected to be announced once personal terms have been agreed. Diop has been pushing for an exit from West Ham after sliding down the pecking order under Moyes, and he was not involved in the game with Manchester City on Sunday despite being fit to play.

90min revealed on Monday that Napoli had entered the race for attacking midfielder Nikola Vlasic, with sources indicating that the Serie A giants were confident of agreeing a deal ahead of Torino.

However, the Turin-based club have agreed to a loan with option to buy – West Ham are happy with the fee put forward to them – and the Croatian is now flying to Italy ahead of a medical with Torino.

Vlasic’s exit will be hugely disappointing to many West Ham fans after he arrived to much fanfare for £30m last summer. He signed a five-year deal at the time, but played just 552 minutes of Premier League football under Moyes – he also struggled for minutes in the club’s run to the semi-finals of the Europa League.

Once the move is finalised, West Ham are expected to dip back into the market for an attacking midfielder or wide forward – Moyes wanting to strengthen further after the addition of Maxwel Cornet.

West Ham, as well as Crystal Palace and Newcastle, have seen an enquiry about the availability of Chelsea midfielder Conor Gallagher knocked back.

The Hammers have been tracking the England international for a number of months, having been impressed with his spell at Crystal Palace last season. As it stands, Blues boss Thomas Tuchel intends to keep Gallagher as part of his squad, but things could change between now and the end of August.

Depending on any signings Chelsea may make, Gallagher’s prospects of first team minutes could diminish, and any chance of him making England’s World Cup squad could hinge on whether or not he secures a move away from west London.

Crystal Palace, Newcastle and West Ham have enquired about the availability of Conor Gallagher, 90min understands.

Napoli have jumped ahead of Torino in the race to sign attacking midfielder Nikola Vlasic on loan from West Ham, 90min understands.

David Moyes has admitted his “surprise” at Jesse Lingard turning down a return to West Ham in favour of joining Nottingham Forest.