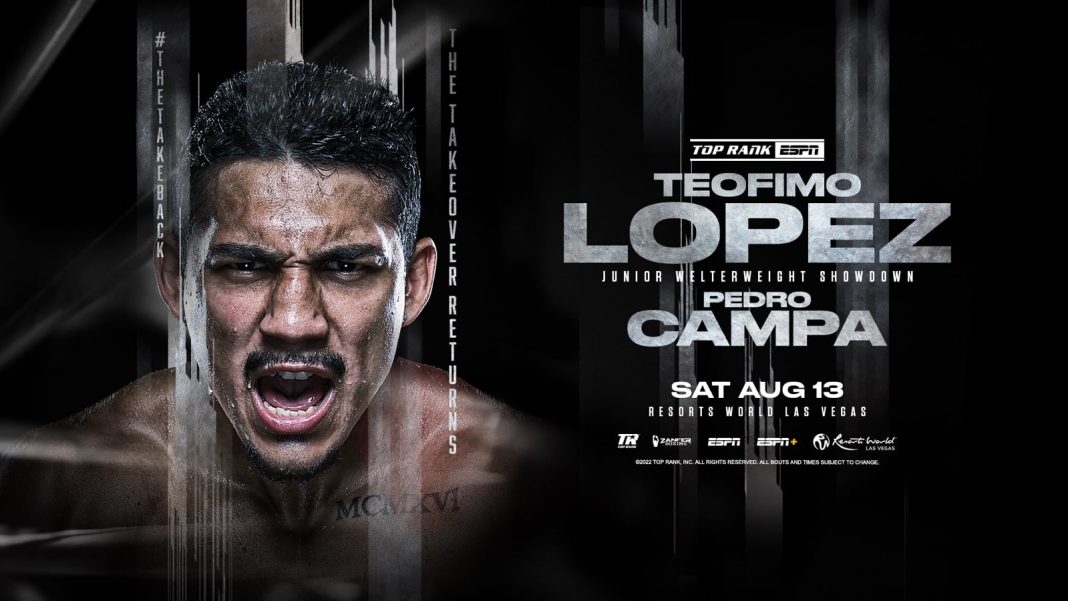 By Allan Fox: Teofimo Lopez says he’d be open to a fight against Ryan Garcia if it were offered to him. The unbeaten Ryan (23-0, 19 KOs) is moving up to 140, and the former unified lightweight champion Teofimo interests him.

Instead of wasting energy trying to put that fight together, De La Hoya says he wants to match Ryan against Teofimo (16-1, 12 KOs), and he’ll be attending his fight this Saturday.

Teofimo is fighting Pedro Campa (34-1-1, 23 KOs) in the main event this Saturday, August 13th, at the Resorts Las Vegas, Las Vegas. Teofimo vs. Campa will be shown on ESPN and ESPN+.

“It’s been like I’ve been reminding my body that we don’t have to go back down to 135,” said Teofimo Lopez to Max On Boxing about his move up to 140.

“We will be at 140. I’ve been working a lot on conditioning and trying to build that stamina and everything because of everything that has happened in the past with the Kambosos fight.

“What do you hope to achieve in the sport?” said Max Kellerman.

“Honestly, everything and the world and everything in it,” said Teofimo. “I’m just trying to become, and I’m not trying, I already am, that elusive fighter, a dynamic fighter that you can rely on. Not just in the boxing world but all around.

“I’m someone that definitely outspoken. I go out there and give the fans what they want to see. The back flips and the Fortnite dances. I’m just an entertainer overall, and I keep myself out of trouble, which I think is the most important part,” said Lopez.

“Honestly, to be real, I’m willing to take on anyone,” said Teofimo. “I’ve always been that way. It’s the Takeover. Nothing really changes from this point forward,” said Teofimo.