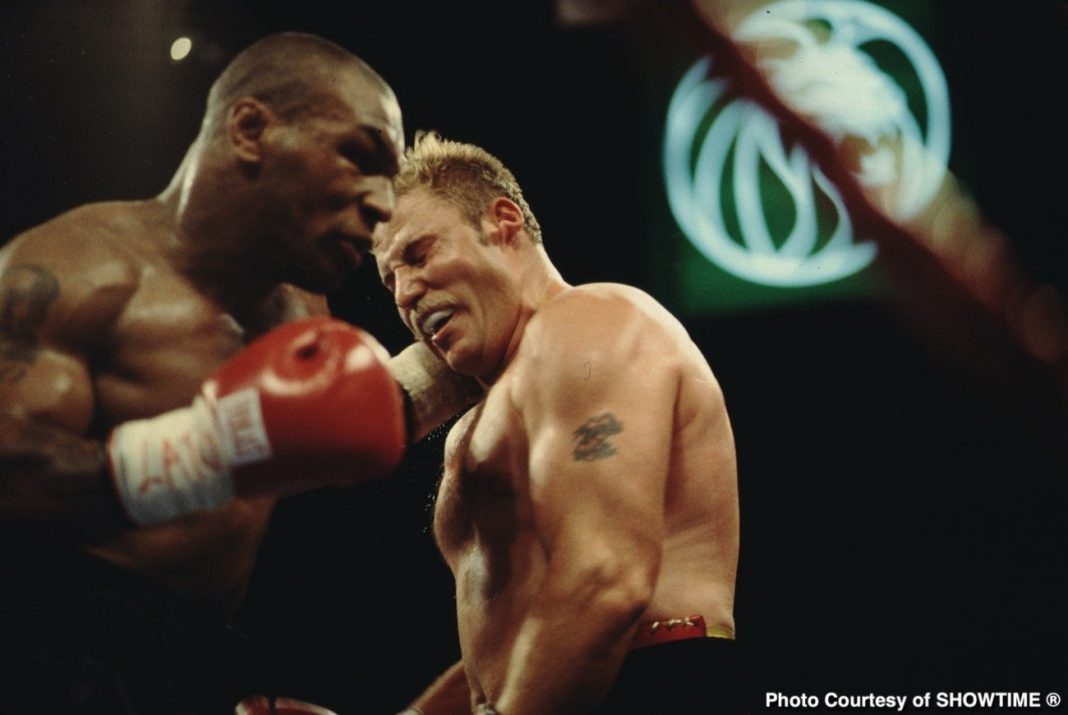 By Vince Dwriter: Mike Tyson is a Hall of Fame boxer who is a polarizing figure. In the mid-1980s, Tyson exploded on the scene with pure athleticism and raw punching power. At the age of 20, he became the youngest heavyweight champion in history, and a year later, he became the first heavyweight to hold the three major belts, WBA, WBC, and IBF, all at the same time.

Tyson would go on to beat Michael Spinks in 1988 and become the lineal heavyweight champion. He was living the dream until a toxic celebrity marriage, drug use, his first professional loss, and a 1992 rape conviction derailed his career. After serving three years in prison, Tyson was released, and he immediately resumed his boxing career.

Iron Mike would make his return to glory as he beat Frank Bruno and recaptured the WBC heavyweight title in March 1996. He added to his hardware collection six months later by knocking out Bruce Seldon in the first round and winning the WBA belt. Tyson was briefly back on top until he suffered back-to-back losses to Evander “Real Deal” Holyfield, and a one-sided loss to Lennox Lewis.

In the third round of the second Tyson-Holyfield bout, back in June 1997, an irate Mike Tyson bit off part of Evander Holyfield’s ear. During the promotion for his June 2002 bout with Lennox Lewis, Tyson threatened to eat Lewis’s children. Tyson concluded his professional career as a boxer on the decline, but once again, when the chips were down, Iron Mike was able to bounce back.

Tyson began a new chapter of his life by having cameos in movies and professional wrestling events, and he went on tour performing his one-man show Mike Tyson: The Undisputed Truth. Iron Mike has lived the type of life that movies are made of, and currently, Tyson is very upset with a popular streaming service.

Hulu, is preparing to release its eight-episode series “Mike” starting August 25. Tyson posted multiple tweets to express his frustration in regards to the series. “Hulu tried to desperately pay my brother @danawhite millions without offering me a dollar to promote their slave master take over a story about my life.”

Tyson continued to articulate his anger and disapproval on social media by posting the statement, “Don’t let Hulu fool you. I don’t support their story about my life. It’s not 1822. It’s 2022. They stole my life story and didn’t pay me. To Hulu executives, I’m just a n****r they can sell on the auction block.”

Hulu describes the series as an unauthorized no-holds-barred look at the life of Mike Tyson. Unfortunately for Tyson, he doesn’t have a possible course of action in regards to “Mike” because a scripted series about the life of a famous person is routinely done without that person’s authorization.