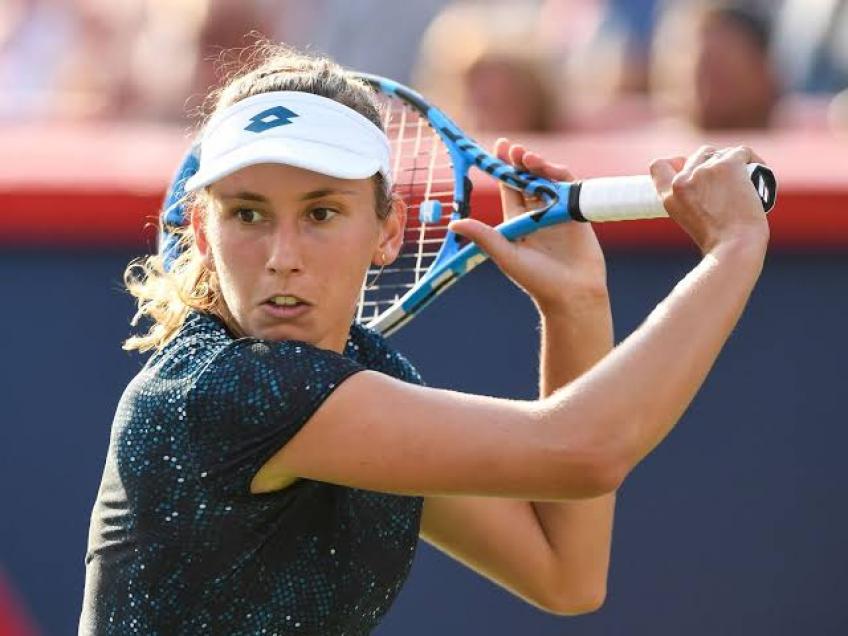 Magda Linette posted the biggest upset of the tournament yet at the Prague Open on Monday. The Pole defeated third seed, Elise Mertens, in their first-round clash, 6-3, 2-6, 6-2. Linette needed two hours and four minutes to complete the win.

Linette won 62% points on return on Mertens’ second serve while winning 61% points on her second serve. She won 56% of first-serve points to Mertens’ 64%. And although she lost her serve four times in the match, she converted five breaks on Mertens’ serve to secure the win for herself.

In the second round, Linette will play either Daria Snigur of Ukraine or Bulgaria’s Viktoriya Tomova.
Slovenia’s Dalila Jakupovic advanced to the second round after her opponent, the sixth-seeded Alison Van Uytvanck retired in their match.

Jakupovic, who qualified for the main draw, was leading the Belgian 5-2 in the first set when Van Uytvanck decides to stop the match.

For a place in the quarter-finals, Jakupovic will take on another qualifier, China’s Qiang Wang.

Wang came from a set down to oust Sweden’s Rebecca Peterson, 1-6, 6-3, 7-6(4). Wang needed two hours and 10 minutes for the win. Wang’s compatriot Lin Zhu also won her first-round match against Vitalia Diatchenko. After an hour and 10 minutes of play, Zhu posted a 6-1, 6-1 win.

The 100th-ranked 28-year-old saved all five break points she faced while securing five breaks for herself on Diatchenko’s serve. Next up for Zhu will be either fellow Chinese player, Xinyu Wang or seventh seed, Anastasia Potapova.

Chloe Paquet posted the other comeback win of the day over Tereza Martincova. The Frenchwoman won 2-6, 6-4, 6-3 and now awaits either qualifier Oksana Selekhmetova or Romanian fourth seed, Sorana Cirstea. Nao Hibino of Japan also won her opener against Mihaela Buzarnescu.

Hibino who entered the main draw as a lucky loser posted a 6-2, 6-2 win and will next play either Anna Blinkova or second seed, Barbora Krejcikova. Lastly, the Czech Republic’s Marie Bouzkova took her place in the second round of the Prague Open.