Ryan Garcia angry at Tank Davis for comment about his parents 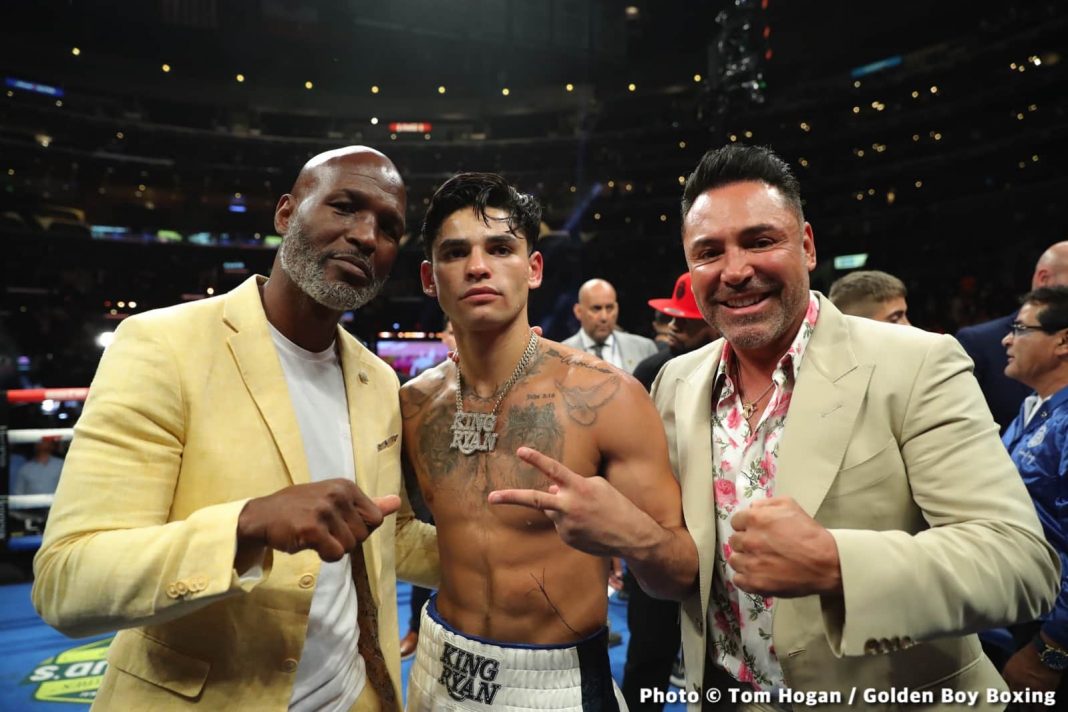 By Craig Daly: Gervonta ‘Tank’ Davis got Ryan Garcia upset on Tuesday by saying that the reason he’s retarded is that his parents are cousins. In reaction, Ryan said he’s going to knockout Tank (27-0, 25 KOs) for one minute, and when he wakes, he’ll apologize for those words.

Ryan (23-0, 19KOs) is trying real hard to make WBA ‘regular’ lightweight champion Tank Davis angry enough to where he’ll agree to a fight against him.

The problem that Ryan has is he’s fighting on a different network than Tank Davis, and he wants him to come up to 140 rather than meeting him in his division.

Tank is too small for the 140lb division, and that was already established when he struggled to defeat former paper champion Mario Barrios last year.

Since Ryan is the one that badly wants the fight with Tank Davis, it only makes sense for him to come down to his weight class at 135. If Ryan can’t or won’t fight at lightweight, then he needs to focus on fighting 140-lb fighters and leave  Tank alone.

“I feel like ima have to go full Ali Vibes when he had to chase down Sonny Liston to make him fight. This man is terrified deep down, AND I’M TALKING ABOUT YOU @Gervontaa. I know you see my tweets; saying nothing or something won’t save you from this whooping!!!” said Ryan Garcia on Twitter.

It would be better for Ryan to build up a solid resume by proving that he can beat A & B level fighters to help entice Gervonta to fight him because he’s been focusing too much on C-level fighters on their way out of the sport like Javier Fortuna, Chris Algieri, Chris Van Heerden and Samuel Vargas.

‘He locked himself in the bunker once he saw the TRUTH!!! I’m knocking you out NO MERCY. Gervonta come out, come out, wherever you are,” said Ryan.

It’s not looking good for Ryan that he’s going to get the fight against Tank Davis this year. Ryan is on the wrong side of the pond than Tank Davis, and he lacks the strong resume needed for him to get the fight.

“The moment @Gervontaa called my Parents “retarded looking” my eyes fixed on making those words cost him, Yeah it was years ago something’s you don’t forget, you will eat that disrespect,” said Ryan.

Just so you have a reference, I’m beating your ass, 2018 going to cost your Consciousness, you will go to sleep for over 1 min. Wake up and then say you are sorry for those words. https://t.co/4tzKK6SKLd