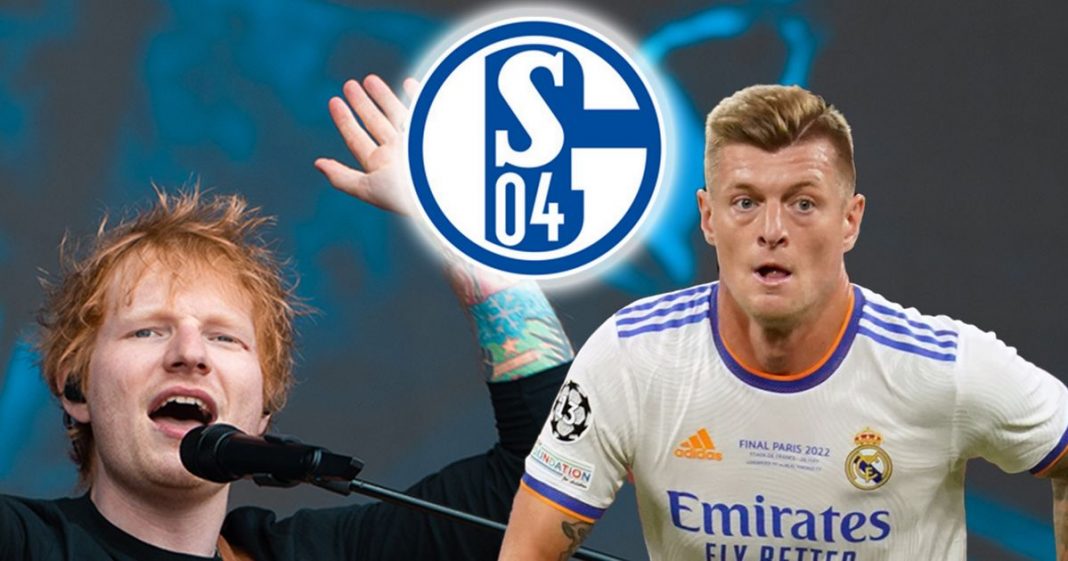 Toni Kroos has aimed a subtle dig at newly-promoted Bundesliga side Schalke in his own podcast, with pop star Ed Sheeran the main focus of attention.

The Real Madrid midfielder also got thrown back a comment from the German club about the tantrum he threw in the Champions League final, causing some friendly back-and-forth on social media. Kroos made a jibe at Schalke for their misfortunes in recent years, as they suffered relegation to the second tier for the first time in 2020.

However, they bounced back last season by winning 2. Bundesliga thanks to an inspired late run of form. Schalke pipped Werder Bremen on the final day to lift the title, with fellow German giants Hamburg finishing in third. It is a league full of big-name clubs including Nurnberg, Hannover, Paderborn, Fortuna Dusseldorf and Darmstadt, but Schalke were able to come out on top.

Ed Sheeran recently performed at Schalke’s Veltins Arena in Gelsenkirchen and managed to fill the 62,000-seater stadium on three occasions. His concerts were met with a great reception and fans were delighted by the performance of the British pop artist, who is touring around the globe.

This led to former Bayern Munich star Kroos mocking Schalke as he appeared on his podcast with his brother Felix. Speaking about the concerts, he said: “Ed Sheeran has achieved something that I have seen very rarely: that people leave happy from an event in the Schalke stadium.”

Will you be tuning in to the Bundesliga this season? Have your say in the comments!

Schalke did not take long to react and posted a tweet on their official account in which the player Simon Terodde is seen giving an interview in the most passionate way. “At least we know how to give cool interviews after the games,” the club wrote. “Kroos against Schalke: 1-1,” wrote the Bild newspaper in a cheeky response.

Kroos was slammed by the German media after clashing with a journalist after May’s Champions League final, when Los Blancos beat Liverpool 1-0. After being asked about Real’s defensive-minded style, he said: “You had 90 minutes to think about sensible questions. And then you ask me two s****y questions. That’s crazy.

“It’s really bad. Really bad, really. First you ask three negative questions. You already know that you come from Germany. It’s not surprising that you get into trouble against Liverpool. What is that a question? We’re not playing a group game somewhere, we’re playing the Champions League final.”