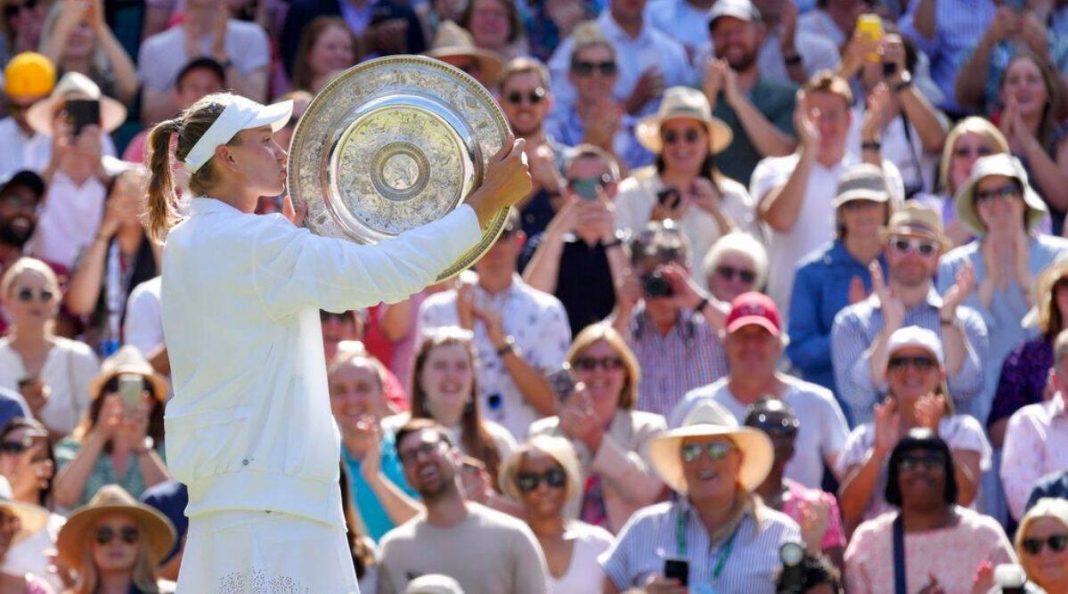 Ahead of the Championships at Wimbledon this year, the All England Club said they “remain unwilling to accept success or participation at Wimbledon being used to benefit the propaganda machine of the Russian regime” as they banned Russian and Belarusian players from the event. With Elena Rybakina’s breakthrough triumph on Saturday, things have not quite gone the way they would have liked.

Rybakina was born in Russia and still has a home in Moscow. The 23-year-old, who became the first player from Kazakhstan to win a Grand Slam title, emigrated to her neighbouring country to take advantage of top tennis facilities, a paid stipend, and many other things offered to her by the Kazakhstan tennis federation.

The All England Club’s ban was unpopular not just in Russia, but all over the world and eventually rebuked by the men’s and women’s tours. And now some Russians have announced Rybakina’s triumph as one of their own.

Elena Rybakina then won five points in a row and never looked back 👏#Wimbledon | #CentreCourt100 pic.twitter.com/34BldgqEo8

In the hours that followed Rybakina’s remarkable Wimbledon triumph, both Russians and Kazakhstanis jumped to take credit for her win. Qassym-Jomart Tokayev, Kazakhstan’s President, tweeted: “Kazakhstani tennis player Elena Rybakina has won a historic victory in the most prestigious Wimbledon tournament. I sincerely congratulate our athlete.”

But Russian tennis federation president Shamil Tarpischev, who had called the 23-year-old “our product” prior to the final, said “It’s the Russian school, after all. She played here with us for a long time,” after the win per AP. Russia Today, a state-controlled media outlet, led with the headline ‘Russian-born Rybakina triumphs at Wimbledon’ on their website.

“They would be super proud” 😊

Elena Rybakina was asked how her parents would react to her being crowned Wimbledon champion#Wimbledon | #CentreCourt100 pic.twitter.com/HOKUL4pFfQ

There has been plenty of backlash to Wimbledon’s move, not followed by any other event on tour, and its critics categorising it as an unfair punishment to athletes competing in an individual capacity for the actions of their political leaders. But the All England Club’s stance was solid, and with Russian commentators now taking credit for Rybakina’s triumph, their decision has effectively resulted in the very outcome they were trying to prevent.

At the age of 18, Rybakina was put in a difficult position with regard to her future. An extremely promising junior player, who had played the Wimbledon juniors event under the Russian flag, she was presented two opportunities.

Elena Rybakina addressing the crowd after her win.#Wimbledonpic.twitter.com/hUtbhu4mei

Ultimately, she switched allegiances to Kazakhstan and has represented them on the international stage since 2019 – even narrowly missing out on a medal at the Tokyo Olympics last year.

Perhaps unfairly, Rybakina’s nationality has been a dominant theme around her Wimbledon run this year. But she has been decisive in the face of some difficult questions. “I didn’t choose where I was born. People believed in me. Kazakhstan supported me so much. Even today, I heard so much support. I saw the flags, so I don’t know how to answer these questions,” she said after the final.

There have been no official statements from the Kremlin on Rybakina’s triumph so far, and it is difficult to see them taking credit for her success when it was their lack of support that drove her to another country.

Rybakina is not alone in accepting Kazakhstan’s offer. Yulia Putintseva, who has won 2 singles titles and has a career-high ranking of No.27 also switched allegiances. So did Alexander Bublik, whose showmanship and flashy shot-making have made him a dangerous opponent on the men’s tour, and a regular feature in popular tennis compilations on YouTube.

The men’s and women’s tours reacted strictly to the All England Club’s ban, stripping Wimbledon of ranking points this year. Thanks to that, Russian tennis can not only stake claim on the reigning women’s Wimbledon champion, but perhaps more legitimately, also the men’s World No. 1 Daniil Medvedev.

Despite Novak Djokovic’s Wimbledon triumph, he will be dropping to seventh in the World rankings, giving the Russian a huge margin for error at the top.

He is over 900 points ahead of No. 2 Alexander Zverev and nearly 2,000 points ahead of No. 3 Rafael Nadal, both of whom have uncertain seasons ahead of them due to injury. Djokovic, who can still gain ground in the rankings, has his participation in the American hardcourt swing and subsequent US Open in doubt due to his unvaccinated status, putting things further in his favour.

The 26-year-old Medvedev is a well-known hardcourt specialist. And America has been his favourite hunting ground. With his path clear over the next four months, he is the heavy favourite to finish the year as World No. 1 for the first time – one of the sport’s biggest achievements.