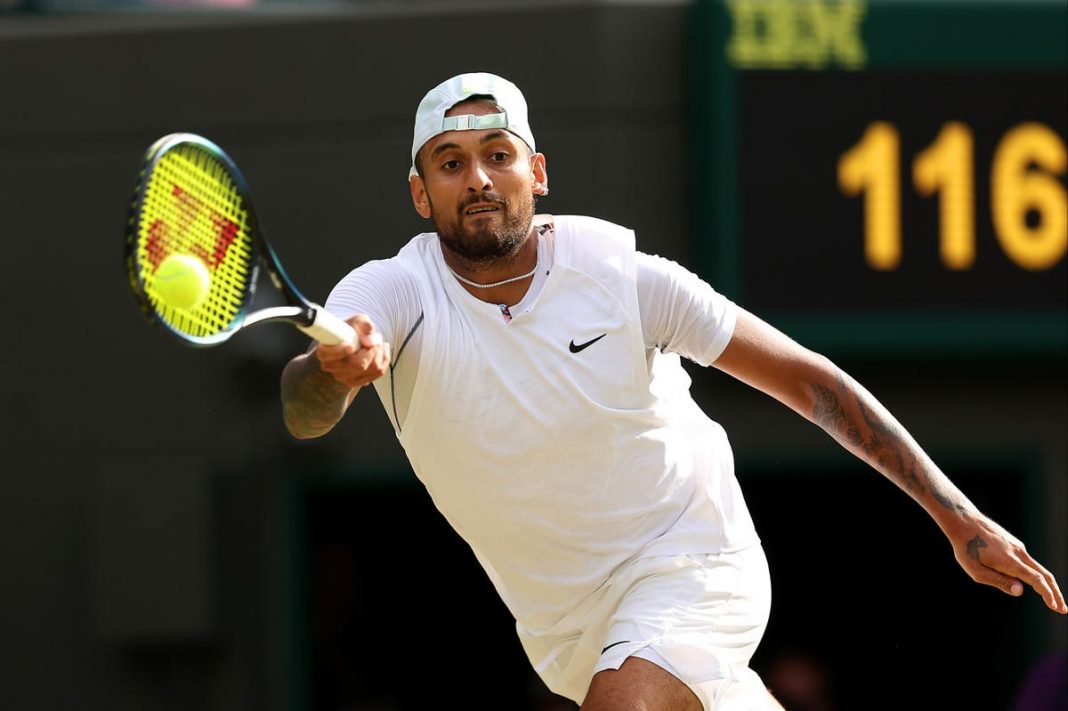 ick Kyrgios marched into his first Wimbledon semi-final without too much drama, the threat of a fine to add to the list or a sign of those red Air Jordans.

And yet at times he still acted like the world is out to get him as he repeatedly berated his box for not cheering him on enough, dissatisfied until they were out of their seats every point.

For them, it was must have been an exhausting experience, for Kyrgios it looked like a relatively straightforward 6-4, 6-3, 7-6 win. He now has an excellent chance of finally fulfilling his massive potential.

Garin had done well to get to this stage but had no real answer to Kyrgios until the third set. How can you when your opponent throws in second serves in excess of 120mph, monstrous forehands and perfectly placed drop shots?

The biggest obstacle to a Kyrgios win perhaps was inside his head. As well as criticising his team, he castigated himself and inexplicably umpire James Keothavong about the hoo-ha over the colourful trainers he had worn leaving the court for his last match.

It was an inauspicious start as he was broken in his opening service game and lost nine points in a row. He stopped the rot with two rapid aces – he served 17 in all in the match.

The Australian got his break back chance in game six, taking it at the third time of asking. In a tight opening set, Garin had a chance for another break but slipped the grass, with that the chance quickly went begging and, before he knew it, he was a set behind.

Having been aggressive and consistent up to that point, he hit four consecutive wayward forehands – three long and one into the tramlines – to concede the set.

The second set ended in much the same way with Garin unsuccessfully serving to stay in it having been broken earlier on to love when both players had approached the net in a rally. Kyrgios got the ball over, Garin didn’t.

At that point, the only player after the second set that appeared to be doubtful of a Kyrgios win was the man himself, warning his team Garin had previously from two sets down at these championships against Alex di Minaur to win.

There were times when he threatened to do just that and launch a fightback as Kyrgios’ level and intensity dipped.

Garin had three break points in gave six of the third set but couldn’t convert any of them. In truth, his failure to convert break points – he managed just one of nine – proved his undoing, so too Kyrgios’ ability to pull out monstrous serves at key moments.

A drop shot brought a mini break for Kyrgios in the tiebreak but a rare double fault negated it. They swapped shanked forehands on each other’s subsequent serves.

With the pressure of what was at stake for both players, their best play eluded them until Kyrigos had the confidence to come to the net and give himself a match point, which he converted for the win.