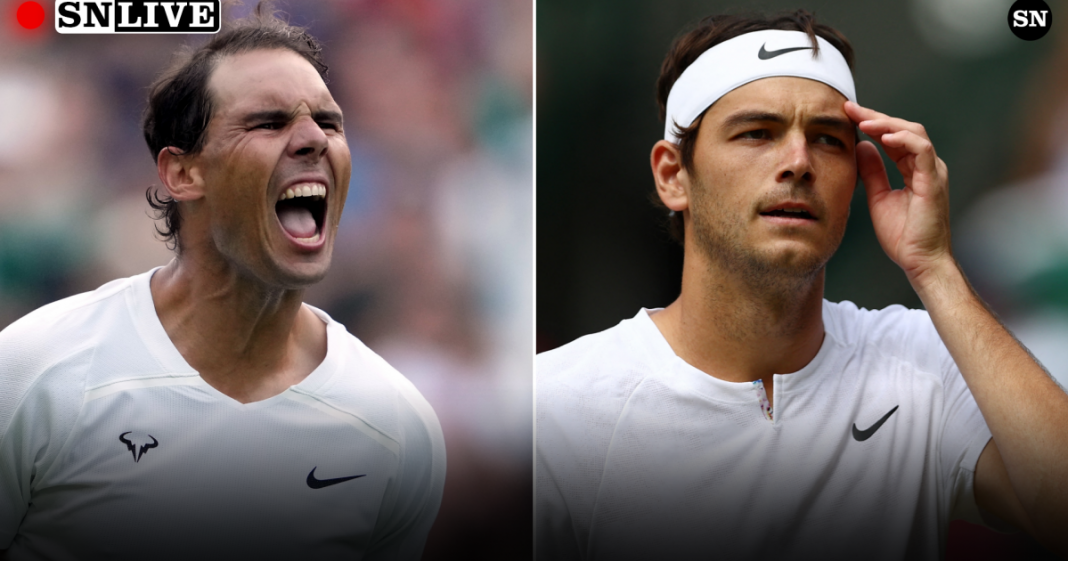 Rafael Nadal will hope he has an easier time of things than Novak Djokovic did yesterday when he takes on American Taylor Fritz for a place in the Wimbledon semifinals.

Djokovic had to come from two sets down to beat Jannik Sinner on Tuesday and Nadal will be hoping for a much smoother journey to the last four to keep his Calendar Grand Slam chances alive when he takes to Centre Court this afternoon.

Fritz may have the slight psychological advantage though knowing he beat Nadal in straight sets the last time the pair met in March at Indian Wells, although Nadal was suffering with a rib injury on that occasion.

Unlike Nadal, who has gone four sets in two of his four matches at SW19 this year, 11th seed Fritz is yet to drop a set in his wins over Lorenzo Musetti, Alastair Gray, Alex Molcan and Jason Kubler.

The Sporting News will be live from Centre Court to bring you all the game-by-game updates below.

Rafael Nadal vs. Taylor Fritz updates and highlights from Wimbledon 2022

Nadal should do better with a backhand volley at the net but his approach is too slow and he hits it into the net, 15-5. Fritz hits another winner, 15-30. Nadal then sends one long and Fritz has two set points. Nadal goes for the big shot again but it’s wide and Fritz leads two sets to one! Perhaps any potential painkillers he had at the previous medical timeout are wearing off a little now…

Fritz opens up his body to hit a sweet forehand winner, 30-15 before Nadal hits a forehand beyond the base line. Fritz is again devastating with the forehand to pick Nadal off once more.

Nadal shows agility to hit a controlled backhand volley, 30-15. Fritz hits one long at the next and then wide. Nadal holds.

Fritz looks comfortable on serve and he knows Nadal is struggling for power in returning on his backhand. He exploits this to hold to 15.

Fritz knows he should be taking advantage of a struggling Nadal but also knows there’s not much he can do about his whipped forehands right into the back corners. He does return one though which gets a loud cheer from the crowd, 30-15. Nadal finds his line again though on the forehand and holds.

Fritz has Nadal doing plenty of running in this game but the latter doesn’t look as sharp as we know he can be. A couple of Fritz errors gets him to 30-30 before Nadal’s backhand return on the move is weak again. Fritz closes with an ace down the middle.

Fritz picks his corners with two big forehands Nadal can only return into the net, 15-30. Nadal gets level but then goes big on a forehand winner and it’s just wide, break point. He double faults!

Fritz gets to 40-0 with two aces. He holds to love as Nadal puts a backhand wide.

Both players slip mid-rally but Nadal stays on his feet to hit a backhand volley, 30-0. Nadal pushes on to hold. Remember, that was the first set Fritz has lost at Wimbledon this campaign.

Nadal has Fritz doing all the running on the opener and he gets there but the No.2 seed is waiting at the net to volley home. Fritz responds by playing the perfect lobbed effort that lands on the base line, 15-15. A forehand winner and a forehand long follow from Fritz, 30-30. Nadal gets set point as Fritz blasts a forehand long again. Nadal takes it! A backhand volley to win it. Barely any reaction though and he heads straight to his chair. Will he last another two sets at least?

Nadal doesn’t seem too keen on getting into long rallies at present and he’s picking his corners to save some energy it would seem. He hits a lovely lob to get to 15-15 before Fritz makes a mistake on the next. He lets his forehand do the talking to get to 40-15, a fierce shot right from the back of the court to the other. Fritz makes another error on the deciding point.

A rare double fault for Fritz, 15-15. Nadal then does brilliantly to stay in the rally with Fritz missing several opportunities and gets to 30-30. Nadal hits a backhand into the net on the next point and then fires a forehand way long.

The serves are just about reaching the 100mph mark which will be of great benefit to Fritz. Nadal smashes home a forehand right to the back of the court to go 30-15 up. Fritz then puts a return long before Nadal adjusts his feet to whip another forehand winner. He holds.

Nadal loses the first three points with any real fight and then doesn’t attempt to get anywhere near a Fritz forehand winner. Let’s see how Nadal does on his serve…

Fritz pulls off a delightful backhand drop shot to cancel out Nadal’s initial effort. Nadal looks to be struggling on his serve though, he can’t get the power he’s used to and that leads to Fritz getting a break point. His first serve is struggling to reach over 100mph but he’s still capable of whipping the forehand and back to back of those gets him back in control. Nadal then sends one up in the air… the crowd make a right mess of catching it, deuce. Fritz hits two errors and Nadal holds but he doesn’t look happy.

Nadal has called his trainer on to take a look. It looks like it could be an abdominal issue causing him problems and he’s walked slowly off the court for treatment. Medical time out.

Nadal comes back out, picks up his racket and heads to the base line. We’re game on for now.

Fritz uses the momentum from the break to get to 40-0 with a few big serves. Nadal reminds him what his forehand possesses with a return winner down the line, 40-15. Fritz hits two more into the net, deuce. before serving an ace. Nadal then hits a wayward return wide and Fritz holds.

Fritz gets to 15-30 with a few aggressive forehands Nadal can’t return. Nadal then double faults to present Fritz with two break points. Fritz’s forehand wide costs him the first. Nadal goes big on a forehand at the next but it flys into the net and Fritz gets the break.

Much better from Fritz as he’s patient in the rally to allow Nadal into making the mistakes and then serves up an ace, 40-0. Nadal hits a forehand into the net to give Fritz the hold.

Hard to tell if Nadal is just extremely focused or if something is bothering him but he’s not showing much emotion at all. He gets to 40-0 like a man in a rush with somewhere to be. Fritz gets two back, Nadal missing an easy volley at the net for the first time. Fritz then puts a backhand into the net.

On the third point Fritz slips but still manages to hit a forehand from the floor! Nadal punishes him with a forehand winner, 15-30. Fritz makes a few silly mistakes and his last forehand of the game goes wide as Nadal gets an early break in this second set.

Nadal has won his last two matches in straight sets but remember his opening two matches saw him win in four sets each. Nadal serves up another double fault, most unlike him, 15-15. He keeps his cool though to hold.

First set 6-3 to the American against Rafael Nadal#Wimbledon | #CentreCourt100 pic.twitter.com/efs9n2a06w

A couple of big serves gets him to 30-0 and then he drills an ace. Three set points… he needs just one as he serves up another ace. What an impressive first set from the American.

Fritz gets to 15-30 with some brilliant play. Nadal had lured him in with a drop shot but Fritz’s return kissed the base line and Nadal could only return it to the net as Fritz was waiting to smash it down the middle. Fritz soon has two break points and Nadal double faults! The Spaniard looks to the ground in frustration. Fritz has the chance to hold serve for the opening set.

Nadal’s volleying has been faultless so far, he hits another winner to get to 15-15. He then goes old school, a whipped forehand right down the line to win the next point. He does the same again and earns break point but Fritz cancels that out with a huge serve out wide. The 11th seed keeps his composure to hold.

A chance for Fritz as two errors from Nadal get him to 0-30. The American unleashes a fierce forehand to the back left that Nadal can’t return and earns himself three break points. Fritz hits long to miss the first one and the second goes begging as Nadal hits a two-handed backhand down the line he had no chance of getting. Nadal’s level after a big serve Fritz can’t return. He gets a fourth break point and takes it! Nadal came to the net but Fritz read him and placed his forehand shot beyond him.

Ruthless from Nadal as he hits a cushioned volley and then a forehand winner down the line to get to 0-30. Fritz wins the next three points though from winners of his own and gets fortunate with the ball hitting the top of the net on the final point.

Nadal hasn’t got out of first gear yet and is looking extremely relaxed on his serve. One of the longest rallies of the match so far ends with Nadal putting a forehand long, 30-15. Nadal hammers home a double handed back hand from the net at the next point. He comes to the net again, this time Fritz tries to lob him but it’s not high enough and Nadal smashes it back down into the grass to hold.

Fritz gets to 30-0 as Nadal struggles to return the serves. Nadal then hits an easy forehand into the net before Fritz misses a similar shot that goes wide, 40-15. Fritz gets on the board with an ace to seal it.

Nadal takes the opening point on Fritz’s serve with a backhand winner down the line to get the crowd going. Fritz hits his first ace of the match to level. Nadal soon finds himself with an early break point as Fritz fires one into the net and he takes it, an overhead smash at the net to give the Spaniard the perfect start.

3pm: Both players enter the court just as Centre Court is starting to fill up again nicely. Plenty of excitement building and after a short warmup we’ll be ready to go here.

2.45pm: Halep did not want to keep Nadal and Fritz waiting! She’s dispatched Anisimova 6-2 6-4 in little over an hour. The third men’s quarterfinal comes next on Centre Court next.

2.25pm: Nadal and Fritz are the second match on Centre Court today and they follow the conclusion of Simona Halep vs. Amanda Anisimova in their quarterfinal. Halep took the first set 6-2 and is currently leading 3-1 in the second set.

2.15pm: Hello, and welcome to The Sporting News’ live coverage of today’s third quarterfinal of the men’s draw. Novak Djokovic scraped through to the semifinals in five sets yesterday where he’ll face British No.1 Cameron Norrie. Nadal is bidding to keep his bid for a Calendar Grand Slam alive, and should he beat Fritz on Centre Court this afternoon, he’ll play the winner of Nick Kyrgios vs. Cristian Garin. It’s set to be a busy day at SW19!